This fall, the city of Monona will serve as a living lecture hall for many students at the University of Wisconsin–Madison, thanks to a new program aimed at strengthening the connection between the university and communities across the state.

The UniverCity Year program is a yearlong partnership with a Wisconsin city, county or community organization that pairs academic courses, faculty, staff and students with projects identified by the community. Monona, a city of about 7,500 just outside Madison, is the first community to join. 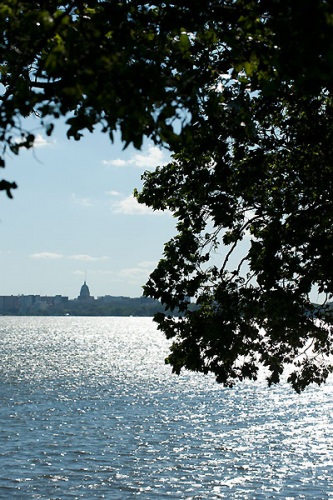 The city of Monona offers iconic views across Lake Monona of the State Capitol and Madison skyline. Photo: Jeff Miller

“Every community could use more help to do the things they have to do, to do them better, to do them smarter. There’s no reason that it should be confined to UW–Madison,” says Jason Vargo, an assistant scientist with the Nelson Institute and the Global Health Institute who leads the initiative. “Students can bring up ideas that maybe politicians can’t.”

The program is modeled on an initiative at the University of Oregon that has been adopted by a number of other universities. UniverCity Year is a member of the Educational Partnerships for Innovation in Communities Network, which Vargo currently chairs.

Monona has identified four project areas: parks and recreation, housing and economic development, “Connected Monona” and active transportation. Students, faculty and staff will work on the projects through courses as well as individual projects.

“I have always been very interested in environmental aspects and climate change in developing countries,” says Castillo, who’s originally from Colombia. “I think I chose environmental studies as a way to help develop this country.”

“The partnership has provided a kick-start to city projects that are stuck due to lack of staff time, resources or other priorities,” says Sonja Reichertz, Monona’s city planner and economic development director. “City committee members, elected officials and staff have already had conversations and new ideas crop up around the UniverCity Year projects that we otherwise would not have had.” 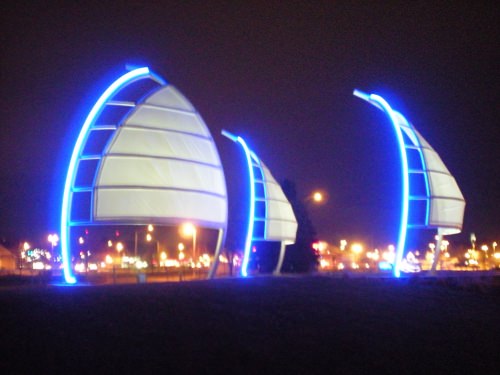 Neon-illuminated sails at the entrance to Monona represent the community’s lakefront identity. Courtesy of City of Monona

Reichertz herself is a UW–Madison alumna, having received her master’s degree in urban and regional planning in 2013.

“In terms of student diversity, I think it’s also a huge win,” says Vargo. “The student body of UW–Madison is more diverse than a lot of communities in Wisconsin. So they bring new perspectives to those communities.”

Later this fall, the UniverCity Alliance plans to seek proposals from other communities in Wisconsin interested in participating in the program. The University of Wisconsin System’s new strategic framework, 2020FWD, designated UniverCity Year as a priority and calls for the program to expand system-wide.

For more information, visit the UniverCity website or email univercityalliance@wisc.edu.