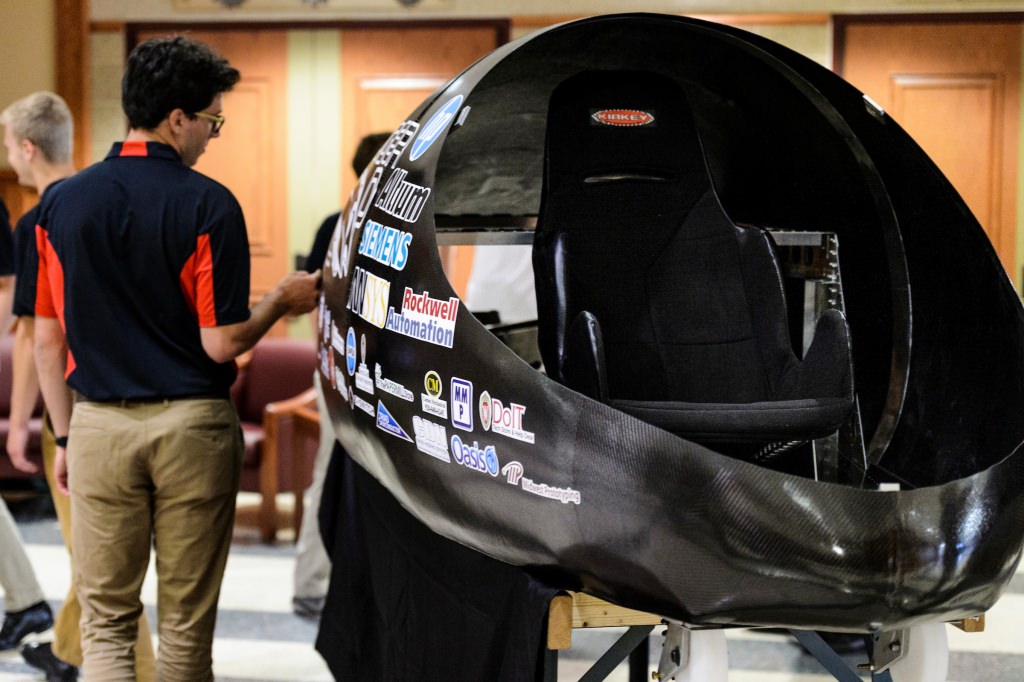 The Badgerloop team revaled its in-progress design for the Badgerloop Pod II during an event held for media, sponsors and supporters at the Mechanical Engineering Building in June. Photo: Jeff Miller

Badgerloop, a team made up mainly of University of Wisconsin–Madison undergraduate engineering students, was among the top competitors at the SpaceX Hyperloop Pod Competition II completed Sunday (Aug. 27, 2017) in California.

Hyperloop, a concept promoted by SpaceX and Tesla Motors co-founder Elon Musk, is a high-speed transportation system that would carry passengers in pods through above-ground vacuum tubes enabling super-fast travel. The weekend competition, which challenged entrants to achieve the highest speed, drew approximately 600 students from 25 teams around the world.

In addition to clearing all the competition’s technical and safety hurdles, the Badgerloop team earned an innovation award for its elegantly designed and executed propulsion system, the foundation of which is nitrogen tanks connected to thrusters via carefully curved piping. Badgerloop is the only team to have received this award in back-to-back competitions.

Only three pods were selected for runs in the SpaceX Hyperloop vacuum tube on the competition’s final day. And while the Badgerloop pod was not among those selected, it ultimately passed all the tests that would have enabled it to run — and earned high praise from judges, says Zuf Wang, team president and a master’s student in industrial engineering at UW–Madison who joined the group as an undergraduate.

“We built a pod that worked,” he says. “We weren’t expecting the innovation award, but the judges were all very impressed by the work we put in.”

Participating in the Hyperloop Pod Competition in January, the Badgerloop team also received an innovation award, as well as an invitation to return to the competition in August. To prepare, the team scrapped its original prototype and built an entirely new, lightweight functional pod with a propulsion system designed to reach a speed of just over 201 miles per hour.

The team is pleased with its performance, says Wang.

“We’re very happy that our pod worked, given the challenges we faced,” he says. “We had a relatively inexperienced team compared to the previous iteration of Badgerloop for Competition I.”

At the same time, Badgerloop members will build on the lessons they’ve learned over nearly two years’ worth of Hyperloop experiences.

“We learned that logistical planning is as important as the engineering challenges,” says Wang. “In our pod, simplicity was a successful decision from the get-go; we had to keep it simple, or we wouldn’t have stood a chance. We knew we would be competing against teams with much more depth — especially since we’re mostly undergraduates.”

Whether there will be a Hyperloop Competition III remains to be seen. However, says Wang, “We are a world-class team. Badgerloop is here to stay.”