In the rural area of Kenya where Cheryl Mulor grew up, many of the buildings are constructed from materials tied to the landscape, such as clay and grass.

It is these traditional, locally acquired resources that Mulor thinks about when she considers the career she would like to pursue.

“I respect these natural materials, and I respect that kind of construction,” says Mulor, a UW–Madison senior majoring in civil engineering. “The company that I hope to own someday would make use of these resources to build more sustainable, long-lasting housing options for rural communities.” 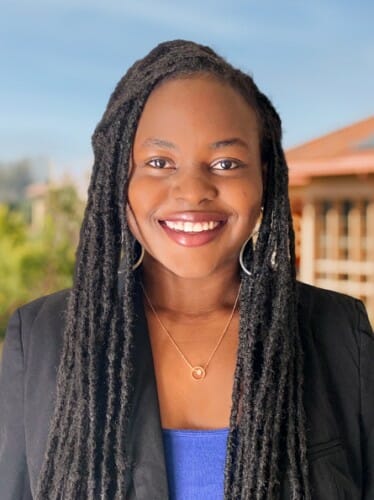 Mulor will be able to pursue this goal as the recipient of a Knight-Hennessy Scholarship. The prestigious honor provides full funding for graduate study at Stanford University.

Applicants are evaluated on independence of thought, purposeful leadership and a civic mindset. The 2021 cohort of winners, announced May 6, includes 76 scholars from 26 countries.

Beginning this fall, Mulor plans to pursue a master’s degree in civil and environmental engineering with a focus in sustainable design and construction at the Stanford School of Engineering. She hopes to one day return to Kenya and own her own company.

Mulor says she became interested in engineering in high school but wasn’t initially sure what specialty area within the field interested her the most. She graduated from high school at age 16 and was accepted to the University of Nairobi, but she chose instead to take a gap year to apply to universities abroad. She felt a university elsewhere might provide her with more career flexibility.

“It was a risky decision because it lacked certainty,” Mulor says. “But I was set on it. I wanted the cultural exposure.”

The Zawadi Africa Education Fund helped her with the college application process. The fund provides scholarships, leadership development, and life skills training to academically gifted but financially disadvantaged African girls. In her second round of applying abroad, Mulor accepted an offer from UW–Madison to be part of the first cohort of King-Morgridge Scholars. The program, launched with six students in the fall of 2017, supports high-achieving students from Africa, Latin America, the Caribbean, Southeast Asia and South Asia.

“It was a new program with tremendous opportunities for international students,” Mulor says. “I thought it would be great to be a pioneer in a program like that.”

It was an excellent choice, she says.

“They really care about us and what we want to do in the future, and the engineering program at UW–Madison has been great, too,” she says.

Mulor praises Jeffrey Russell, a professor of civil and environmental engineering and dean of the Division of Continuing Studies, as a particularly helpful and engaged mentor.

During her time at UW–Madison, Mulor has been a math tutor at Madison East High School and a tutor in calculus and other pre-engineering classes at the College of Engineering. She interned at CG Schmidt, a general contractor in Madison, and was part of the 2020 Clinton Global Initiative cohort. She cofounded Imhotech, a startup that aims to create an electronic medical record keeping system suited for health facilities in African countries.

Those eligible to apply for the Knight-Hennessy program must be either in their final year of study for their first bachelor’s degree or within six years of having earned their first bachelor’s degree. The program is named for John L. Hennessy, president of Stanford from 2000 to 2016, and Phil Knight, a Stanford alumnus and co-founder of Nike Inc.

UW–Madison’s last recipient of a Knight-Hennessy Scholarship was Ross Dahlke in 2020.