Ross Dahlke describes his relationship with communication as “complex.”

Self-conscious about a stuttering problem as a child, he practiced tongue-twisters and recited the words of FDR and Churchill, eventually gaining the courage to join his high school speech club. As an undergraduate at the University of Wisconsin–Madison, he turned his fascination with interpersonal communication into research on how discussions in the public sphere translate to real-world action on important civic issues. 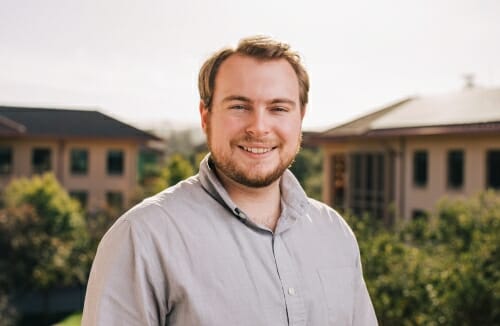 Now, after two years as a data scientist at a marketing technology firm, Dahlke will be able to continue his communication research as the recipient of a Knight-Hennessy Scholarship. The prestigious honor provides full funding for graduate study at Stanford University.

Applicants are evaluated on independence of thought, purposeful leadership and a civic mindset. The 2020 cohort of winners, announced May 4, includes 76 scholars from 26 countries.

Dahlke plans to pursue a theory and research Ph.D. in communication at the Stanford School of Humanities and Sciences, where he will study in the Social Media Lab with Professor Jeff Hancock, the lab’s founding director. Dahlke plans to research the connection between how people communicate online and how they behave offline in civic life.

“I want to understand the impact of digital media on solving some of society’s biggest problems,” says Dahlke, who grew up in Westfield, Wisconsin, and now lives in Minneapolis. “For example, why is it that a viral campaign to stop using plastic straws causes people to stop using straws, but campaigns encouraging people to drive their cars less — a more environmentally impactful policy — is futile?”

Dahlke has excelled since a young age. In high school, he founded a cheese distribution business that has grossed more than $3M. He also began serving as vice chairman of the Marquette County Democratic Party. In that role, he experienced the nitty-­gritty of retail politics — the door knocking, the phone calls, the hand-shaking.

“I want to understand the impact of digital media on solving some of society’s biggest problems,”

“I realized that contemporary politics was not about the speeches that spoke to everyone at once,” he says. “It was about having individualized interactions with citizens. It was in these formative moments of my life that I realized that interpersonal communications at the most granular levels are the bedrock of a functional society.”

The insight drove his scholarly work at UW–Madison, where he was part of the Undergraduate Research Scholars Program, taught a weekly seminar about the research experience, and was awarded an Honors Senior Thesis Summer Research Grant. In 2017, as a senior, he was a finalist for a Rhodes Scholarship. He graduated in the spring of 2018 with a bachelor’s degree in journalism and political science and comprehensive honors in the liberal arts and journalism.

“Ross is an extraordinarily talented young man: smart, hardworking, and humble,” says Vilas Distinguished Achievement Professor Lewis Friedland of the UW–Madison School of Journalism & Mass Communication. “He is the type of student I came to UW–Madison hoping to teach. He exemplifies the Wisconsin tradition of scholarship and public service.”

The Knight-Hennessy program is currently taking applications for 2021 scholars. Those eligible to apply must be either in their final year of study for their first bachelor’s degree or within six years of having earned their first bachelor’s degree. The program is named for John L. Hennessy, chairman of Alphabet Inc. and president of Stanford from 2000 to 2016, and Phil Knight, a Stanford alumnus and co-founder of Nike Inc.