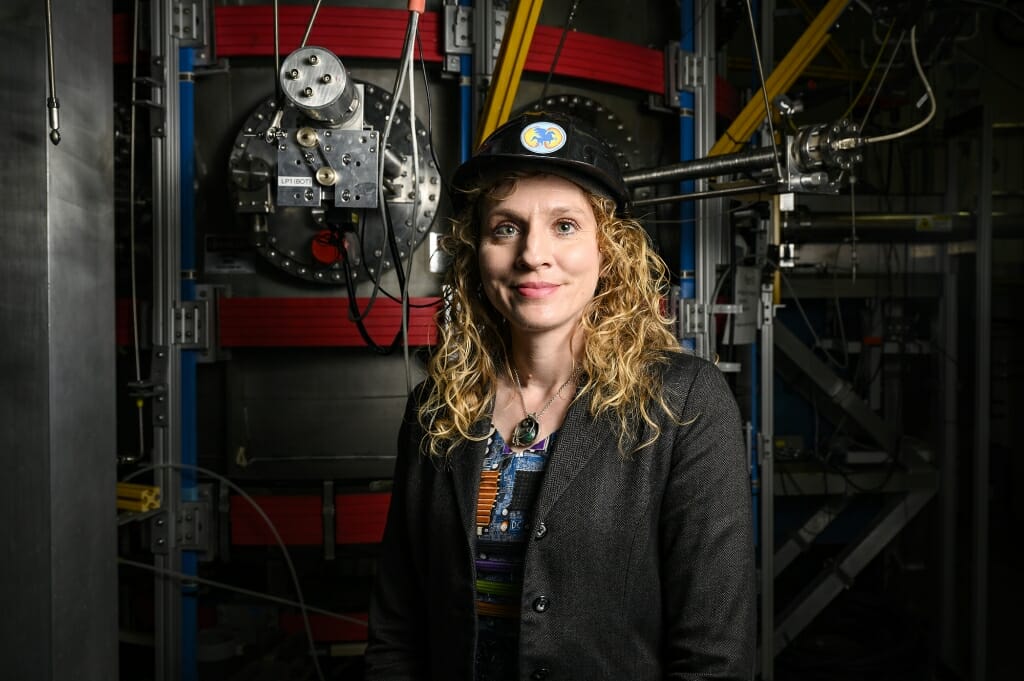 Steffi Diem in the Engineering Research Building on the UW–Madison campus. She works on the Pegasus project, a fusion power experiment. One promising application of the project is development of fusion as a virtually unlimited, environmentally friendly source of energy. Photo: Bryce Richter

One day, it will be funny.

Those are the optimistic words we try to believe when we struggle to deal with the unfunny reality of the time.

One day came Feb. 5 for Steffi Diem, when she tweeted:

1st year undergrad- boyfriend told me I wasn’t smart enough to get an engineering degree. So far:

⭐️This week I start my dream job as an Assitant Prof in Eng. Physics at UW–Madison⭐️

Usually her tweets get a handful of reactions — five likes here, 20-something for a particularly good tweet. But this one has been liked by nearly 50,000 people and retweeted more than 2,000 times, and hundreds are sharing their own stories of succeeding despite the doubts of others — and themselves.

It’s quite a way for the Racine native to start her job as assistant professor in engineering physics at UW–Madison. Not only is that boyfriend long gone, Diem has the support of her husband and fellow fusion energy researcher, Aaron Sontag, who was willing to move from sunny California to wintery Wisconsin so they could both take jobs at the College of Engineering. 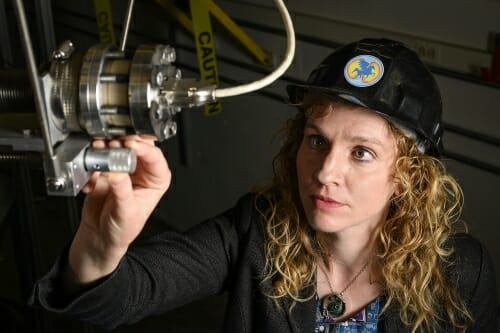 The Pegasus project uses a device with a chamber containing powerful magnets, into which plasmas are injected. The experiment plays a part in the worldwide effort to develop scientific understanding of confined plasmas. Photo: Bryce Richter

Diem works on the Pegasus project, an experiment that allows study of a wide variety of plasma physics phenomena. One promising application is development of fusion as a virtually unlimited, environmentally friendly source of energy.

“I am excited to be back in academia at UW,” Diem says. “I find working with students makes me a better researcher. Students really push me to be creative and think differently about how I approach problems, and I find that inspiring. ”

Diem takes a few minutes to talk about what it’s been like to go unexpectedly viral and what this whole thing has taught her.

We were in the process of making the LONG drive from San Diego to Madison and it was 1 a.m. when we finally drove into Madison. My husband and I were reminiscing about our time as students at UW, and that memory hit me and I just started laughing. We found it quite entertaining that I would be returning to Madison to be a professor at the same institution someone once told me I wouldn’t even earn a degree in engineering from.

What kind of reaction did you think it might get?

Honestly, I thought it would just be one of those tweets that my friends would relate to and maybe a couple of them would share similar stories. I mostly use Twitter to follow other scientists and engineers to learn more about their research, and I don’t tweet that often.

When did you first notice that it was really taking off?

I sent that tweet out the morning of my second day on campus as a new faculty member. I was really busy that day and checked my phone around lunchtime and saw the activity starting to pick up. I had a lot of meetings that afternoon and finally had time to check my phone that evening and I was completely shocked by how much it had been shared and liked.

After my first year of engineering, I went back and told them that I was first in my class.#WomeninStem

There can be a certain comfort in sharing when you don’t have a big audience. When it was clear that lots of people were reading it, did you feel #blessed or #overwhelmed?

People have not only congratulated you, but they’ve shared their own stories. What’s it been like?

I have absolutely loved reading about other people’s success stories and cheering them on. The great part of Twitter is meeting people from around the world who have shared experiences and learning something new and inspiring from them. I also had several people send me private messages to say that my tweet made them realize they weren’t alone in experiencing comments like these.

My field is less than 8 percent women and recently there has been a big push within our community to change that, so I am very optimistic about the future. I’ve been at meetings where I was the only woman in a room full of 40+ men and it is lonely — so sharing these experiences brings people together. I also received a couple of messages from women who said they were afraid to pursue a career in STEM but my tweet inspired them to go for it.

Research has shown that diverse groups solve problems faster. The U.S. National Academy of Engineering identified providing clean energy from fusion (the process that fuels the sun and stars by combining light nuclei to form a heavier nuclei, thereby releasing energy) as one of the grand challenges of the century, and we will need a diverse workforce to tackle it.

On my first day of undergrad I was told by my chemistry professor that he doesn’t like to teach girls because they are just there to get an Mrs degree. Four years later I graduated with my BSCE with honors in 1979.

When were you first interested in engineering? Was there much support for girls in school?

I wasn’t sure what I wanted to study in high school. I loved art and was afraid to pursue a degree in science because I doubted myself even though my aunt took me to grad school with her when she was a PhD candidate in organic chemistry. When it came time to apply to college — I only applied to UW–Madison — my parents suggested engineering because it had a lot of job opportunities.

At that time I had no idea what engineers even did. Then I showed up at student orientation and the students said if I studied nuclear engineering it would be easy to get a job, so I went with that.

On my second day on campus, I was seriously concerned with how I was going to pay for college, so I approached the chair of the department and asked who was hiring student hourlies. The first person on that list was Professor Raymond Fonck, whose research was focused on fusion energy. It just so happened he was in his office and he took time to explain his research, gave me a tour of the lab and hired me on the spot. And that was the day I learned about fusion energy and really became interested in engineering.

Do you remember your reaction to the boyfriend at the time — other than I assume breaking up with him on the spot?

Honestly, by that point he mentioned several times that I wasn’t smart. I was already very good at doubting myself and I was just tired of it.

It’s not always boyfriends who are doubting us. We can do a pretty good job of that ourselves. What do you tell yourself during those times? And what would you tell others?

I doubt myself a lot. I’ve found it helps to have a great support structure of friends and family who can cheer you on. A couple of years ago, I started the routine of making sure my resume was up to date. That’s a great way to have an objective list of accomplishments and skills that I can look back on when I start doubting myself.

Has this made you think differently about the role of Twitter?

I think it shows just how much people appreciate sharing the good and the bad of our personal experiences along with sharing our scientific journeys.

I’ve faced a lot of discrimination in my career and I used to bottle all of those comments up and try to ignore them. That led to loss of productivity and I really started doubting myself. I’ve learned that by sharing these experiences, it builds allies who will step up and support others, especially underrepresented minorities, and shows people they aren’t alone.

The only college professor that i remember by name is my Freshman Chemistry professor who told me i would never get in to medical school and be a doctor. I gave a college Commencement address and told the grads that.I also thanked him posthumously. #DontLetAnyoneTellYouWhoYouAre