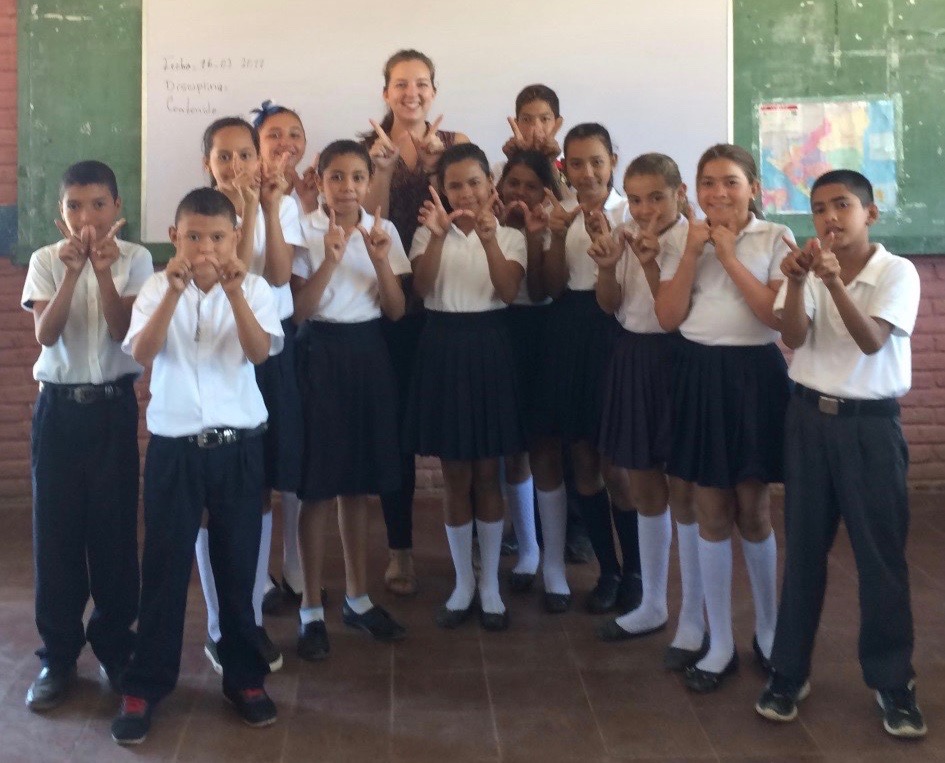 As an environment volunteer for the Peace Corps in Nicaragua, Laura Linde, center rear, teaches science in elementary schools, facilitates gender-focused camps, and is involved in Peace Corps Nicaragua’s gender and development committee.

The University of Wisconsin–Madison ranked first among large schools on the Peace Corps 2017 Top Volunteer-Producing Colleges and Universities list. There are 87 Badgers currently volunteering worldwide.

This is the third year that UW–Madison has ranked among the top five large universities and colleges. In 2016, UW–Madison ranked No. 2.

“Public service is a proud tradition at the University of Wisconsin–Madison, and our partnership with the Peace Corps is one long-standing example,” says Chancellor Rebecca Blank. “Not only do our graduates make meaningful contributions in communities around the world, they gain valuable knowledge and leadership skills that will remain with them for a lifetime. It is truly the Wisconsin Idea in action.”

Service abroad also allows volunteers to build strong professional experience. Intensive technical training is provided to volunteers by Peace Corps at the start of service. In addition, volunteers have numerous opportunities to develop skills related to work, language, culture and safety. As a result, returned volunteers are often sought by government, corporate and nonprofit employers seeking candidates with international experience.

“The growth UW–Madison alumni gain through experiences with Peace Corps cannot be understated,” says Guido Podestá, vice provost and dean of UW–Madison’s International Division. “These volunteers are gaining leadership skills, intercultural competency, and a greater understanding of the world we live in. They share their experiences with other UW–Madison students and inspire them to take on similar global challenges.”

Laura Linde is one Badger currently making a difference abroad as a Peace Corps volunteer. A 2014 UW–Madison graduate, Linde has been serving overseas as an environment volunteer in Nicaragua since 2015. For Linde, it was the inspirational testimonials that Peace Corps recruiters offered at a career fair at UW–Madison that ultimately motivated her to serve.

“For me, serving in the Peace Corps stems from ‘The Wisconsin Idea’, which is taking the experiences and knowledge I learned at Madison and applying them beyond the state borders,” says Linde. “I wouldn’t be a Peace Corps volunteer if I would not have studied abroad during my time at UW–Madison, as that opportunity gave me the confidence and desire to continue living abroad and exploring other cultures.”

Linde graduated from the UW–Madison with a degree in chemistry and environmental studies before departing for Nicaragua. She was a member of the Alpha Chi Sigma fraternity, the National Society of Collegiate Scholars, and other organizations on campus that helped make her a competitive applicant for Peace Corps service.

As an environment volunteer, Linde teaches science in elementary schools, facilitates gender-focused camps, and is involved in Peace Corps Nicaragua’s gender and development committee. After she completes her service later this year, Linde hopes to work for a nongovernmental organization to promote improved environmental practices internationally.