The Peace Corps has announced that for the fourth year in a row, the University of Wisconsin–Madison is No. 1 on the agency’s list of top volunteer-producing colleges and universities in 2020. There are 79 Badgers currently volunteering around the world.

Since the agency’s founding in 1961, around 3,369 alumni from University of Wisconsin–Madison have served abroad as Peace Corps volunteers. There are 279 volunteers from Wisconsin currently serving worldwide; 6,425 Wisconsinites have served in the Peace Corps since 1961.

“UW–Madison is proud of these Badgers, who are working to better the lives of people around the world,” says Chancellor Rebecca Blank. “These volunteers build ties with the communities they serve, creating lasting relationships that strengthen global connections for years to come.”

Elisia Cintron is among UW alumni lending their skills and talents to communities around the globe. Cintron, a 2019 graduate who majored in international studies and Russian, was a Chancellor’s Scholar and a Wisconsin International Scholars (WISc) program participant while enrolled at UW–Madison. Additionally, she participated in a study abroad program in Westminster, England.

Serving in the Peace Corps was a dream for Cintron since high school. Having been placed at a primary school in North Macedonia, she is living her passions for service and international engagement.

“Now I’m only six months living in the country, and I have learned so much already — from the languages, to the cultures, to living with the host family, to working at a primary school with my students and other colleagues,” Cintron says. “I can honestly say that this program is going to be with me for the rest of my life.” 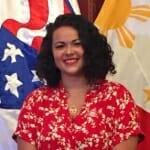 Q & A with Lenai Johnson, who is serving with the Peace Corps in the Philippines. She works with survivors of gender-based violence and acts as a role model to girls around the globe.

The Peace Corps ranks its top volunteer-producing colleges and universities annually according to the size of the student body. View the complete 2020 rankings of the top 25 schools in each category at peacecorps.gov/news/.

UW–Madison will host a series of events on campus and in the community March 1–7 as part of Peace Corps Week, a national celebration of the 59th anniversary of the Peace Corps. The campus and local communities are invited to celebrate the Peace Corps and the university’s status as a number one volunteer producer at events held throughout the week, such as the annual Story Slam on March 4 and the Human Library on March 6. Details and a full list of events are available at peacecorps.wisc.edu.