Three generations of historians from across Europe, Israel and the United States gathered in Berlin June 6–9 for a conference marking the 100th birthday of noted UW–Madison historian George L. Mosse (1918-1999) as well as the 20th anniversary of the Mosse Program in History at UW–Madison and the Hebrew University in Jerusalem. 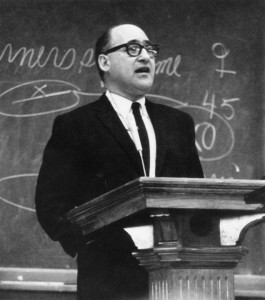 Mosse was a pioneering historian and authority on Nazism who himself fled the Nazi regime. Students flocked to his UW classes from 1955 until his retirement in 1987, drawn by his charismatic style and his insights into European cultural history.

“Mosse’s writings are perhaps more relevant now than in his lifetime,” says John Tortorice, director emeritus of the Mosse Program. “Twenty years after his passing, a new generation of scholars are now engaged with his work, inspired by his moral courage, and nourished by his passionate commitment to teaching.”

In “Mosse’s Europe: New Perspectives in the History of German Judaism, Fascism, and Sexuality,” scholars explored the legacy and contemporary implications of Mosse’s groundbreaking research in the field of cultural history. They asked such wide-ranging questions as: What is the fate of liberalism and what are its limits? How do racial and gender stereotypes continue to play a role in political culture since 1945? And how do public intellectuals today engage with Mosse’s analysis of fascism, Nazi ideology, and the Holocaust?

Mosse was born into a family in which the stakes of these questions were immediate long before the rise of the Third Reich. Mosse’s grandfather, Rudolf Mosse, founded the liberal newspaper the Berliner Tageblatt, the influential voice of a newly emancipated and integrated German Jewish milieu, in 1871. Through the Tageblatt and his estimated 130 other print and media outlets, Mosse advanced his economic beliefs, including a commitment to free trade, and made clear his cultural commitments, such as the importance of respectability, charity, and Bildung — the German idea of cultural education. He and his wife Emilie supported educational and social welfare programs throughout German society. 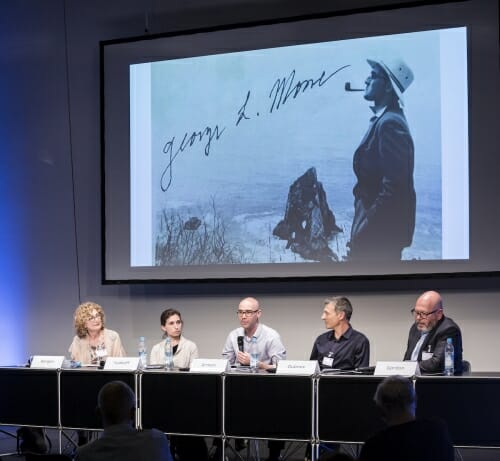 In “Mosse’s Europe: New Perspectives in the History of German Judaism, Fascism, and Sexuality,” scholars explored the legacy and contemporary implications of Mosse’s groundbreaking research in the field of cultural history. Photo: David von Becker

George L. Mosse continued his grandfather’s efforts to advance education, and in 1999, Mosse left his estate to UW–Madison. He wanted the funds to be used to support the teaching of history, and to establish a unique program of collaboration and exchange with the Hebrew University in Jerusalem, where he also taught from 1969 to 1987, to fund graduate fellowships and a professorship. “Mosse’s Europe,” this past June’s conference, reflected Mosse’s commitment to future generations and his transnational vision for the continued collaboration of cultural scholars working around the globe.

“‘Mosse’s Europe’ reflected the rich history of Mosse Program support for European history,” says program director Skye Doney. “The program has funded the research of over 140 students and professors from Europe, the U.S., Israel Asia, and South America. The conference allowed multiple generations of former fellows to engage in a sustained discussion of their own work and the ongoing importance of George L. Mosse’s scholarship.”

The sold-out conference, held at the Deutsches Historisches Museum (the German Historical Museum) and the Jüdisches Museum Berlin (Jewish Museum Berlin), was a high-profile event in Berlin. Many former UW–Madison undergraduate and graduate students who studied with Mosse attended and shared their reflections on the profound influence he had on the course of their lives. “Mosse’s Europe” attracted German media attention and was covered by the German Public Broadcasting Radio network, Deutschlandfunk. 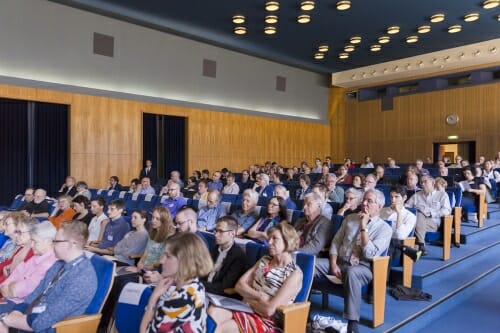 At the sold-out conference, many former UW–Madison undergraduate and graduate students who studied with Mosse shared their reflections on the profound influence he had on the course of their lives. Photo: David von Becker

“We must always evaluate every society from the perspective of the outsider, as Mosse was himself an outsider,” Aleida Assmann, professor emerita at the University of Konstanz told Deutschlandfunk. “Mosse represents the radical perspective of human rights, and he says how a society deals with the outsider is the test of a democratic society.”

A highlight of the conference was an excursion to the newly built James Simon Galerie for a public unveiling of an 1869 sculpture of a lion by August Gaul. This famous sculpture was once part of the Mosse family art collection and is one of many recently restituted pieces of art returned to the Mosse family that have directly benefited students at UW–Madison. The lion now greets all visitors to the extensive museum island complex in Berlin.