Cora Marrett, a distinguished sociologist, former deputy director of the National Science Foundation and UW–Madison alumna, will lead this year’s offering of a university course and public lecture series celebrating the Wisconsin Idea.

Inspired by university President Charles Van Hise’s famous statement – “I shall never be content until the beneficent influences of the university reaches every family of the state,” – the idea has become a fundamental part of the University of Wisconsin System, demonstrating not only a philosophy but a tradition of university outreach efforts that extend beyond the Badger state. 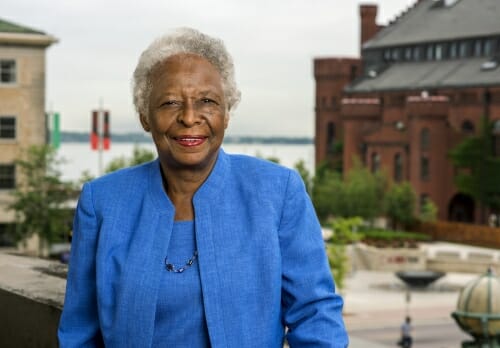 The course, “Forward? The Wisconsin Idea, Past and Present,”  explores how knowledge generated by the university has benefited the public for more than a century and will continue to do so for decades to come.

Though designed for undergraduate students, the course is also open to the public and in previous years has drawn a broad community audience; in this way it aims to foster an ongoing conversation among students, staff, faculty, and the citizens of the state. Attendees can choose between a one-credit, lectures-only option and a three-credit, lectures plus course option.

“From its initiation in 2016, the course has centered on the university in service to the public. This has remained the core of the Wisconsin Idea, although the Idea has been expressed and acted on in various ways over the years,” Marrett says. “At times the emphasis has been on the university and improvement in governance. At other times, on expanding the bases of resources or ensuring educational opportunities for all. Whatever the particular focus, the unifying thread has been the deployment of knowledge in the public interest.”

Marrett holds a bachelor’s degree from Virginia Union University and a master’s degree and a doctorate from UW–Madison, all in sociology. Marrett was a faculty member at UW–Madison from 1974-97, with appointments in the departments of sociology and Afro-American Studies. From 2001-07, Marrett was the University of Wisconsin System’s senior vice president for academic affairs. In 2012, she was recognized by the Wisconsin Alumni Association with a Distinguished Alumni Award. In 2017, UW–Madison awarded Marrett an honorary degree for a career of extraordinary accomplishment.

This year’s course will focus on the forging of democracy and building of relationships, trust, and common understanding across the populace.

“The Idea potentially has links to democracy, by broadening and deepening social connection among citizens,” Marrett says. “This vision of the Idea has been explored less frequently.”

Among the questions to be examined:

“I am impressed by the dedication of the team that has overseen the course in prior years, the excellence of the lectures that various people had given, and the sense of a strong interest in ensuring continued deliberation on and pursuit of the Wisconsin Idea,” Marrett says.

The Wisconsin Idea has evolved since 1905 with people bringing their own ingenuity and interpretation. Marrett’s own concept has widened after conversations with colleagues.

“The broadened understanding has been motivating, for it suggests that the Wisconsin Idea is not a finished product,” Marrett says. “Rather, it is a vision to be revisited and revised to be realized as the public context changes.”

To join the conversation, visit the course website or Facebook page. If you are live tweeting lectures, please use the hashtag #wiscidea.