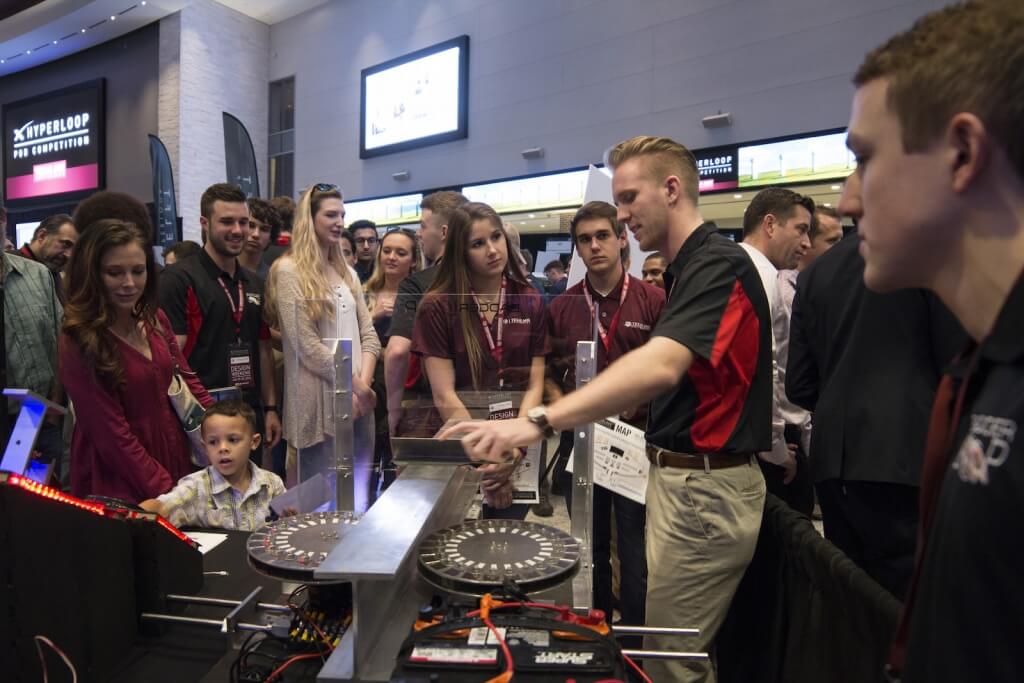 A team of University of Wisconsin–Madison engineering students won 3rd place overall in a worldwide competition to design a pod for shuttling people on a futuristic high-speed transportation system known as the Hyperloop.

The Hyperloop is a conceptual rapid-transit system first proposed by SpaceX and Tesla Motors co-founder Elon Musk in 2013. It involves transporting passengers in pods traveling as fast as 760 mph in vacuum tubes above ground. With the Hyperloop, passengers could travel from Los Angeles to San Francisco in less than 30 minutes.

During the two-day competition, teams presented their designs to a panel of SpaceX, Tesla and university judges for a chance to build and test their design prototype at the world’s first Hyperloop test track, being built by SpaceX adjacent to its headquarters in Hawthorne, California.

The BadgerLoop team’s design, which harnesses an array of magnets to levitate the pod in the Hyperloop tube, impressed the SpaceX and Tesla engineers, according to BadgerLoop co-president Brett Sjostrom, a UW–Madison senior majoring in mechanical engineering.

The team’s pod design features innovative spinning wheels that have powerful magnets around the outside. These so-called Halbach wheels stabilize the pod and propel it down the tube.

“The Halbach wheels allow us to speed up the pod, slow it down or maintain its speed,” Sjostrom says. “Our pod will be fully levitating and won’t be touching any part of the tube.”

BadgerLoop is unique among the top teams because it consists primarily of engineering undergraduates, as opposed to teams like MIT that are made up of graduate students, and the BadgerLoop students only worked on the project in their free time rather than as part of their engineering coursework. The only teams to score higher than BadgerLoop were MIT and Delft University of Technology from the Netherlands. 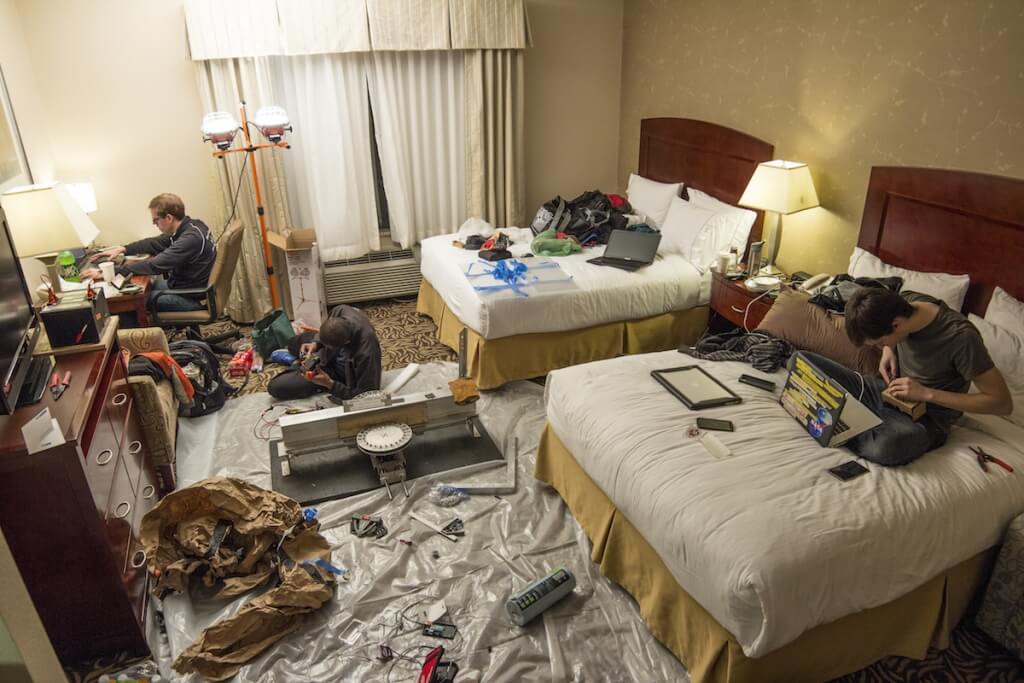 After making the road trip to Texas for SpaceX’s Hyperloop Pod Competition Design Weekend, members of the UW–Madison BadgerLoop team converted one of their hotel rooms into a workspace to assemble and prep the various demos for their exhibit booth. Eric Schirtzinger

“The design competition was a huge success for BadgerLoop,” Sjostrom says. “I cannot emphasize enough how impressed and proud I am of our team of engineers.”

Elon Musk made a cameo during the final day of the competition and gave a short talk to the rapt audience. Sjostrom and BadgerLoop co-president Tieler Callazo, a mechanical engineering senior, even got the unexpected honor of meeting backstage with Musk for a half hour along with the presidents of the other top four teams.

“It was surreal to get to have a conversation with someone as brilliant and inspiring as Musk,” Sjostrom says. “We talked about Hyperloop designs, and it was one of the coolest experiences of my life.”

BadgerLoop is one of 22 student teams from the competition that will be heading to California in summer 2016 to test their actual human-scale pods on SpaceX’s one-mile test track. Sjostrom says the team’s booth at the competition, which featured a Halbach wheel demonstration among other interactive exhibits, attracted significant interest not only from the public but also from various company executives in attendance. The team is now in contact with companies interested in sponsoring BadgerLoop. Funding from sponsorships will allow the team to purchase materials and construct its 15-foot, 2,200-pound pod prototype to race on the test track.

“It was surreal to get to have a conversation with someone as brilliant and inspiring as (Elon) Musk. We talked about Hyperloop designs, and it was one of the coolest experiences of my life.”

The team will build its test pod in a workspace in Chamberlin Hall on the UW–Madison campus. Physics Professor Duncan Carlsmith awarded BadgerLoop a mini grant from the Garage Physics makerspace to develop and prototype the pod system. Michael Cheadle, a lecturer in the Department of Mechanical Engineering, is the team’s advisor.

“BadgerLoop has given me a much more diversified skill set that is simply impossible to learn in the classroom,” Callazo says. “I’ve never been as cross-disciplinary in any internship as I have with this competition.”

Regardless of whether the Hyperloop concept ever becomes a reality, the students’ experiences and achievements with BadgerLoop are putting them on the fast track to bright engineering careers. For example, SpaceX was so impressed with Duncan Adams’ work on BadgerLoop that recruiters at the event offered the mechanical engineering senior an internship on the spot.

“BadgerLoop has the ability to make an impact in the world, and we look forward to innovating transportation when we test out our pod on the track in California over the summer.”

“It’s a great feeling to get to work with fellow Badgers who are so unbelievably smart and enthusiastic, and the team’s performance shows the exceptional level of talent that UW–Madison produces,” says Sidney Smith, a mechanical engineering senior on the team.

Sjostrom says it’s very rewarding to see the hundreds of hours and numerous all-nighters that team members devoted to this project pay off with BadgerLoop advancing to the final round of the Hyperloop competition.

“SpaceX saw how hard we worked and how hard we will work in order to build this pod in the short time frame,” Sjostrom says. “BadgerLoop has the ability to make an impact in the world, and we look forward to innovating transportation when we test out our pod on the track in California over the summer. We are honored to be representing the UW–Madison College of Engineering, and we hope to make the college proud.”