The Alpha Chapter of Wisconsin Phi Beta Kappa at the University of Wisconsin–Madison announced the induction of 158 students into membership at its 2016 banquet, held recently at Union South.

Two members of the UW–Madison faculty were also honored. Catherine Stafford, associate professor of Spanish, received the Phi Beta Kappa 2016 Excellence in Teaching Award. Susan Stanford Friedman, director of the Institute for Research in the Humanities and Hilldale Virginia Woolf Professor of English and Women’s Studies, was inducted into Phi Beta Kappa as an honorary member. 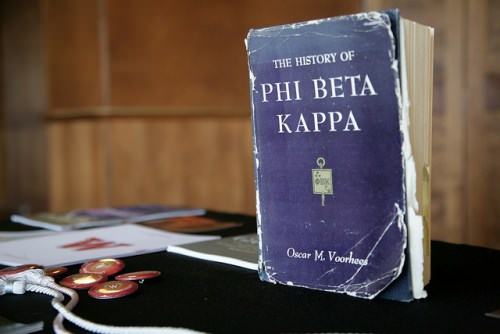 Initiates into Phi Beta Kappa, the nation’s oldest academic honor society, embody excellence in both depth and breadth of study in the liberal arts. The Alpha Chapter inducts less than five percent of the senior class from the College of Letters & Science.

Undergraduate members are elected in their junior or senior years upon recommendation of the Membership Committee. Initiates must have an outstanding academic achievement record and a minimum cumulative grade point average of 3.75 for seniors or 3.9 for juniors.

According to the organization’s national secretary, John Churchill, “Phi Beta Kappa stands for freedom of inquiry and expression, disciplinary rigor, breadth of intellectual perspective, the cultivation of skills of deliberation and ethical reflection, the pursuit of wisdom, and the application of the fruits of scholarship and research in practical life.”

A list of new members is available here. (Six additional students were initiated but chose not to release their names publicly.)