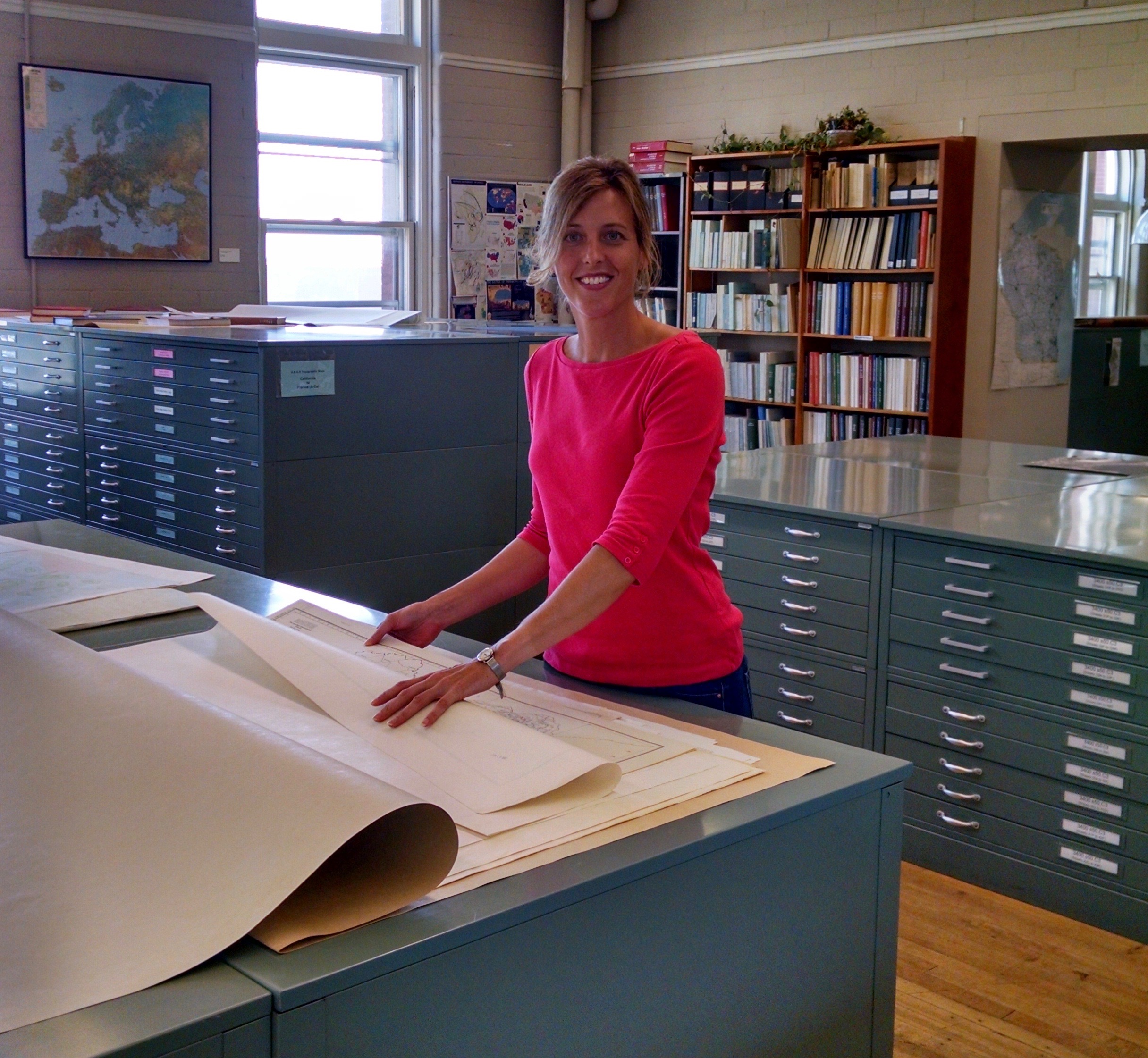 Jaime Martindale, map and geospatial data librarian in the Department of Geography, is picutured in the Arthur H. Robinson Map Library in Science Hall at the UW–Madison.

Earth is a big place. Few people know that as well as Jaime Martindale, map and geospatial data librarian at the Arthur H. Robinson Map Library at the University of Wisconsin–Madison.

But — with hundreds of thousands of maps and aerial photos, bound atlases and gazetteers and surveys at her fingertips — Martindale can find things. Even things that aren’t there anymore.

Tom Sybert came to Martindale looking for something huge, but long gone: a 130-ton B-52 bomber that crashed in the dark on Nov. 18, 1966, near unincorporated Hauer in Sawyer County in northwestern Wisconsin.

“My great uncle, Roger Langham, was one of the first to get up there and see this terrible tragedy,” says Sybert, 43, who grew up in the Chicago area, but regularly visited his mother’s family’s farm near Hauer. 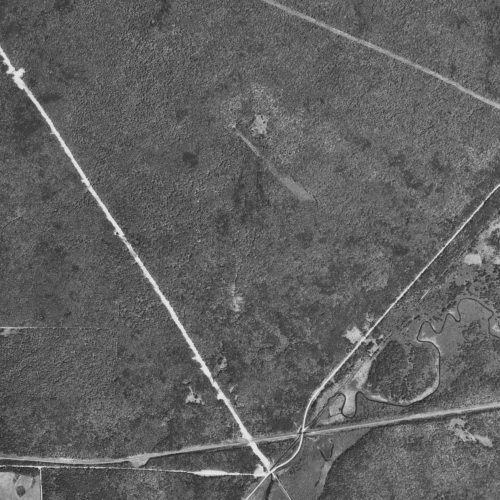 A detail of the aerial photo, highlighting the path cleared by the crashing jet, which was more than 180 feet wide and 150 feet long. Courtesy Robinson Map Library

On their last flight, the nine crew members and trainees aboard the bomber from Barksdale Air Force Base in Louisiana had begun a low-level mission over Ladysmith to the southeast. They were calibrating their terrain-avoidance radar when they clipped treetops and crashed.

The explosion was seen, heard and felt miles away, according to news reports, in which part-time fire-watcher Langham climbed the Sand Lake Lookout Tower to help direct first responders to the site. The enormous plane left a scar hundreds of yards long in timber thick and remote enough that bulldozers were required to clear a path to the wreckage.

But that was 1966. After the Air Force recovered remains and much of the wreckage, the maple, oak and poplar trees picked up where they left off. Sybert remembers picking through the woods as a boy, aimlessly looking for the crash site.

“My great-uncle isn’t with us anymore, and I didn’t know anyone who knows exactly where the plane crashed,” he says. “What my sons and I would like to do is put a marker there as a memorial.” 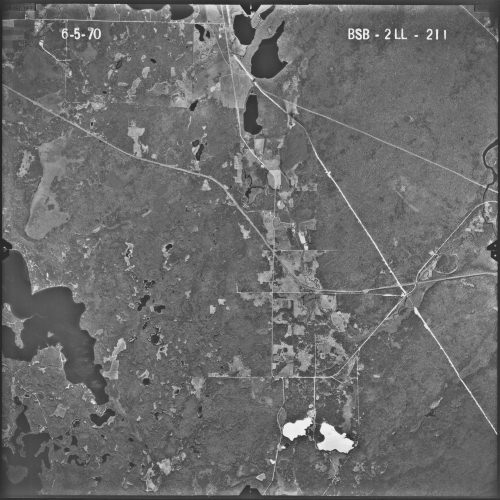 The scar from the Nov. 18, 1966, crash of an Ari Force B-52 bomber is still visible — near the horizontal centerline of the image, directly down from the “2LL” mark in the upper right — in this aerial photo taken in June of 1970. Courtesy Robinson Map Library

Sybert’s employer, elevator parts manufacturer C.J. Anderson & Company, helped make a steel plaque engraved with the names of the airmen lost in the crash. But where to put it?

“We knew the general vicinity, but nothing better than that,” Sybert says. “My 15-year-old, Owen, has been looking forever at Google Earth for any discoloration in the trees. And we were close to just walking around in the woods with metal detectors.”

Until this week, that is, when Sybert interrupted the typical requests to the Map Library for help interpreting legal descriptions of property lines.

“It’s one of the most fascinating questions I’ve ever had as a librarian,” says Martindale, who is close to 13 years in her job.

She matched Sybert’s loose description of the area with old newspaper clippings and a book of local history by Ethel Elliot Chapelle that resides online in the University of Wisconsin Digital Collections.

“It was the bit about the low-level flight and their radar that made me think I might be looking for a hillside or high ground that could have caught them by surprise,” Martindale says.

On a topographic map of Sawyer County, she found just such a hill — east of the Sand Lake Lookout Tower, rising a couple hundred feet from a swamp to the southwest, toward Ladysmith.

Among the library’s deep collection of aerial photos of Wisconsin is a complete set taken in 1970. And right across the shoulder of the hill — even nearly four years after the crash and in a photo taken from tens of thousands of feet up — Martindale found a stark, narrow gash in the trees. 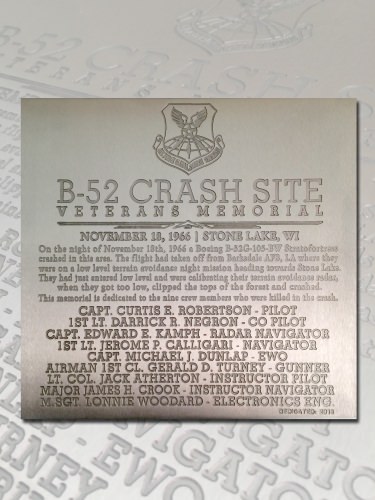 Tom Sybert hopes to post this 11-inch-square plaque memorializing nine U.S. airmen at the site where their B-52 bomber crashed on Nov. 18, 1966, near Hauer in northwestern Wisconsin. Courtesy Tom Sybert

It could practically be runway, if we didn’t know the reverse to be true.

“Surrounded by all this information every day, you can forget just how useful it can be to so many people,” Martindale says. “Opportunities like this one are great reminders of what we have to offer. People use these resources for really personal stories.”

In November — coincidentally near to both Veterans Day and the 50th anniversary of the crash — Sybert hopes take Owen, Zack (17) and Quinn (14) into the woods near Hauer and up the hill to add an ending to a long-running story.

“It will feel good to put the plaque in the right place,” says Sybert. “Nobody will probably visit, but that’s OK. It seems like the right thing to do.”