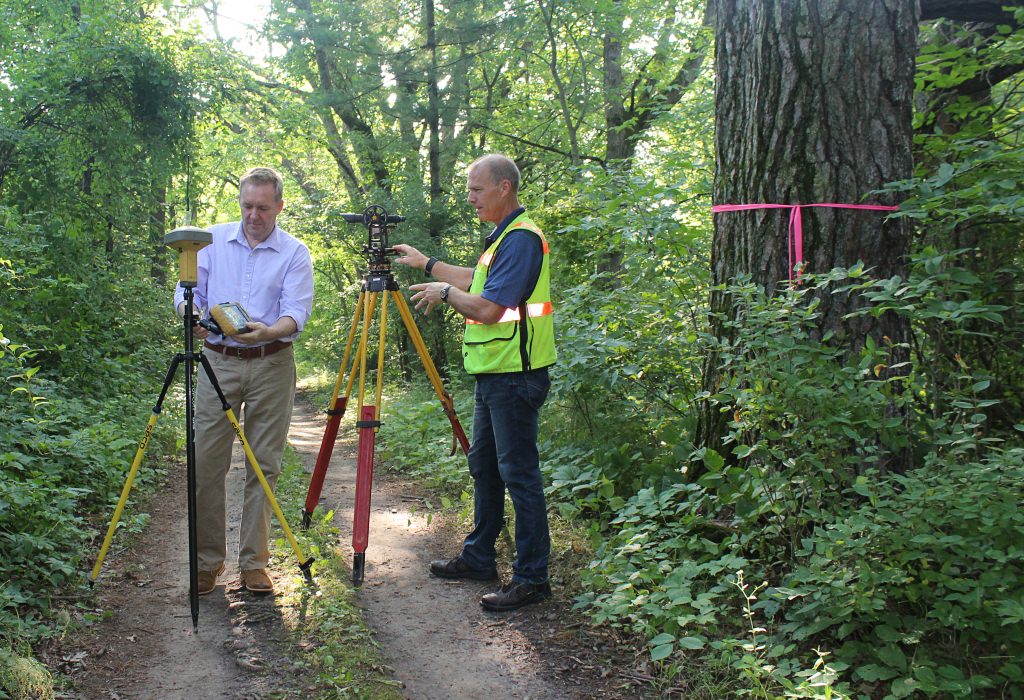 At a location in La Crosse County, state cartographer Howard Veregin, on left, stands next to a modern, GPS-assisted surveying instrument. On right, Bryan Meyer, La Crosse County Surveyor and president of the Wisconsin County Surveyors Association, stands with a transit like the one likely used to survey this site. Brenda Hemstead, State Cartographer's Office, UW–Madison.

The state cartographer’s office at UW–Madison has released the latest update to a portal that pulls together 72 county databases that document who owns which parcels of land in Wisconsin.

Heeding a mandate of the state legislature, the new interface processes and amalgamates data from countywide ownership databases and is intended to simplify planning for infrastructure, development, environmental conservation, and other activities that take place across county lines.

“The goal was to simplify life for the many users of this critical information,” says state cartographer Howard Veregin, who maintains offices in the Geography Department in Science Hall on campus. “The portal uses a statewide dataset created by stitching together copies of the 72 county datasets. It’s one ‘quilt’ with 72 patches, not 72 individual pieces of fabric.

Despite an ongoing revolution in how land is surveyed and those records are housed, “how to make this interesting and relevant to the public has always been an issue,” he says, “but talking about digital data sets, digital maps and land parcels ultimately has an impact on people’s lives – where they can build, how much taxes they pay. It can be pretty technical stuff, but it also affects how efficiently state and county governments can function.”

Wisconsin is one of about a dozen states with a digital, statewide parcel map with sustainable support, Veregin says. “We are pretty far ahead in that respect, but it was an enormous challenge to make this statewide parcel map work. As always, the biggest challenges were the institutional ones, not the technical.”

The basis for land mapping in most of Wisconsin is the Public Land Survey System The state’s parcel mapping program is funded through the Department of Administration, which provides grants to counties to create and maintain digital parcel datasets and to the State Cartographer’s Office to fuse these datasets together for the whole state.

If parcel maps seem to exist in the world of black-or-white, outside-or-inside-the-line mentality, the dark underbelly contains unavoidable uncertainties due to the original surveys performed more than a century ago (see sidebar).

The revamped statewide parcel map is a big advance, Veregin says. “The legislature decided we need this statewide map for its ease of use, efficiency for the public and private sectors. The data is created by the counties, and is updated more frequently than the statewide portal, but county data stops at county boundaries. So tasks related to economic development in the Fox River Valley or hydrogeology in the Central Sands area, become incredibly difficult without a statewide, seamless parcel map.”

Before the statewide map, “You had to request all the data, combine it, then do the analysis. And you have to do it all over again next year. Now the companies that do engineering or road construction can get data statewide; it’s a much more modern and efficient system.

“Constructing this statewide parcel map required us to merge many components and many types of databases; there is a lot more to it than people might imagine.”

It’s a paradox: The closer you look, the less you know

Parcel lines on a map seem definitive, but most are only approximate, says Wisconsin State Cartographer Howard Veregin. Your 40 acres may actually cover 38 acres, or 43, or even overlap a parcel claimed by a neighbor. The high water mark on your lakefront property may not reflect the reality of spring flooding today.

And so you may be paying too much property tax, or too little; an inevitable uncertainty that could become grist for disputes that enrich lawyers and surveyors. 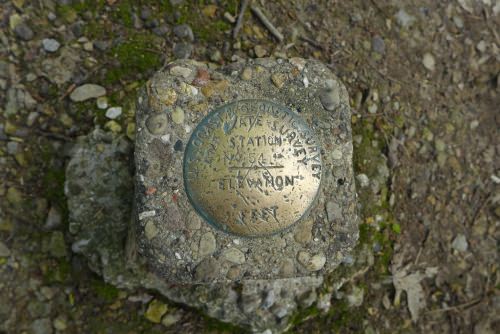 This survey mark, near Lake Mendota in Madison, is apparently “abandoned,” and replaced by a better, more accurate monument. David Tenenbaum

During the 1830s, ‘40s and ‘50s, under federal mandates, Wisconsin was surveyed in preparation for the arrival of European-descended newcomers.  The early surveyors – a widespread group that included Presidents Washington, Jefferson and Lincoln, used compass, chain and sextant to locate corner posts for townships, which were six miles on a side, and then corners of the square-mile tracts called sections.

In many cases, a corner was marked by a wood post placed, for instance, 150 chain links (each 0.66 foot long) and due south of a bur oak and 30 rods at 135° from a maple tree. By now, that post has likely disintegrated, and the two “bearing trees” may be dead, rotted and forgotten (but not all of them!). “We see corners that deviate, as a result of the inherent inaccuracy of the old survey tools,” says Veregin, “and some surveyors, who were paid by the number of locations they posted, probably cut some corners.”

There are other problems, Veregin points out. “Most people don’t know that latitude, longitude, and elevation are always moving — in part because the crust of the Earth is moving and in part because our datums, which depict the approximate shape of the earth, keep getting better.”

Some corner posts have been relocated and cemented into the ground, says Veregin. “But some have not been visited in 100 years, or more. We may not know where are, and we can’t update them without a huge infusion of cash.” 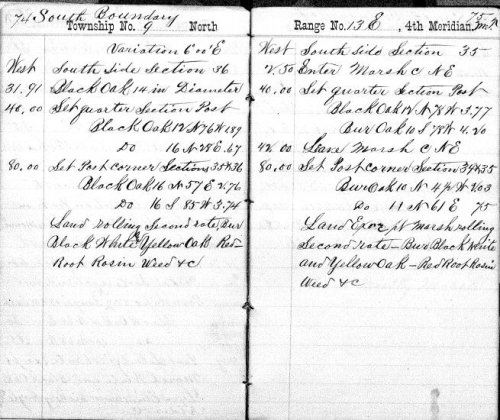 The original notes from a 1835 survey for a section in Dodge Township, Dodge County, Wisconsin. Note the reference to a “14-inch black oak” tree that may be long gone.

Some day, an accurate point may be located with a smartphone, says Veregin, but paradoxically, greater accuracy could cause more problems than it would solve. “It would open Pandora’s box. A set of legal and policy questions gets raised when you start monkeying around with these inaccurate points. The closer you look, the less you know.”

An extensive resurvey would be expensive and disruptive, especially if followed by reassessment.  “Imagine if some politician had to tell a property owner, ‘I know you have been paying tax on 40 acres, but actually you only own 35.’ Would the county owe a refund?”