A team of researchers led by University of Wisconsin–Madison professor David Gamm is developing a transplantable retinal patch intended to help restore vision to military personnel blinded in the line of duty and to treat individuals with degenerative eye diseases such as macular degeneration.

The technology, funded by a U.S. Department of Defense grant exceeding $5 million, will be based on a system in which human induced pluripotent cells are used to generate light-responsive eye cells called photoreceptors along with the cells that support them, called retinal pigment epithelium. 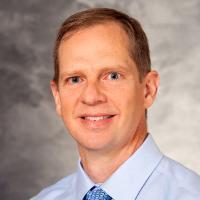 Blast injuries, shockwaves, high-powered lasers and bright light from explosions can all damage these cells and cause permanent or total vision loss. Photoreceptors do not regenerate on their own. People with macular degeneration, which is common among older adults, also experience deterioration of their vision due to loss of these same cells.

“This patch would, in theory, replace the dead photoreceptors and RPE, and give the person another chance to see,” says Gamm, director of the McPherson Eye Research Institute and professor of ophthalmology and visual sciences at the UW School of Medicine and Public Health.

The DoD grant will fund development of the patch in multiple phases, in partnership with the UW–Madison College of Engineering, the University of Birmingham, the British Ministry of Defence, the National Eye Institute, and Opsis Therapeutics, which Gamm co-founded in 2016.

Early studies will involve Yucatan swine, which have similar eye structures to humans. If the technology works in animals it will clear the way for human clinical trials, Gamm says.

Read more about this new project.