Ada Deer: A lifetime of firsts 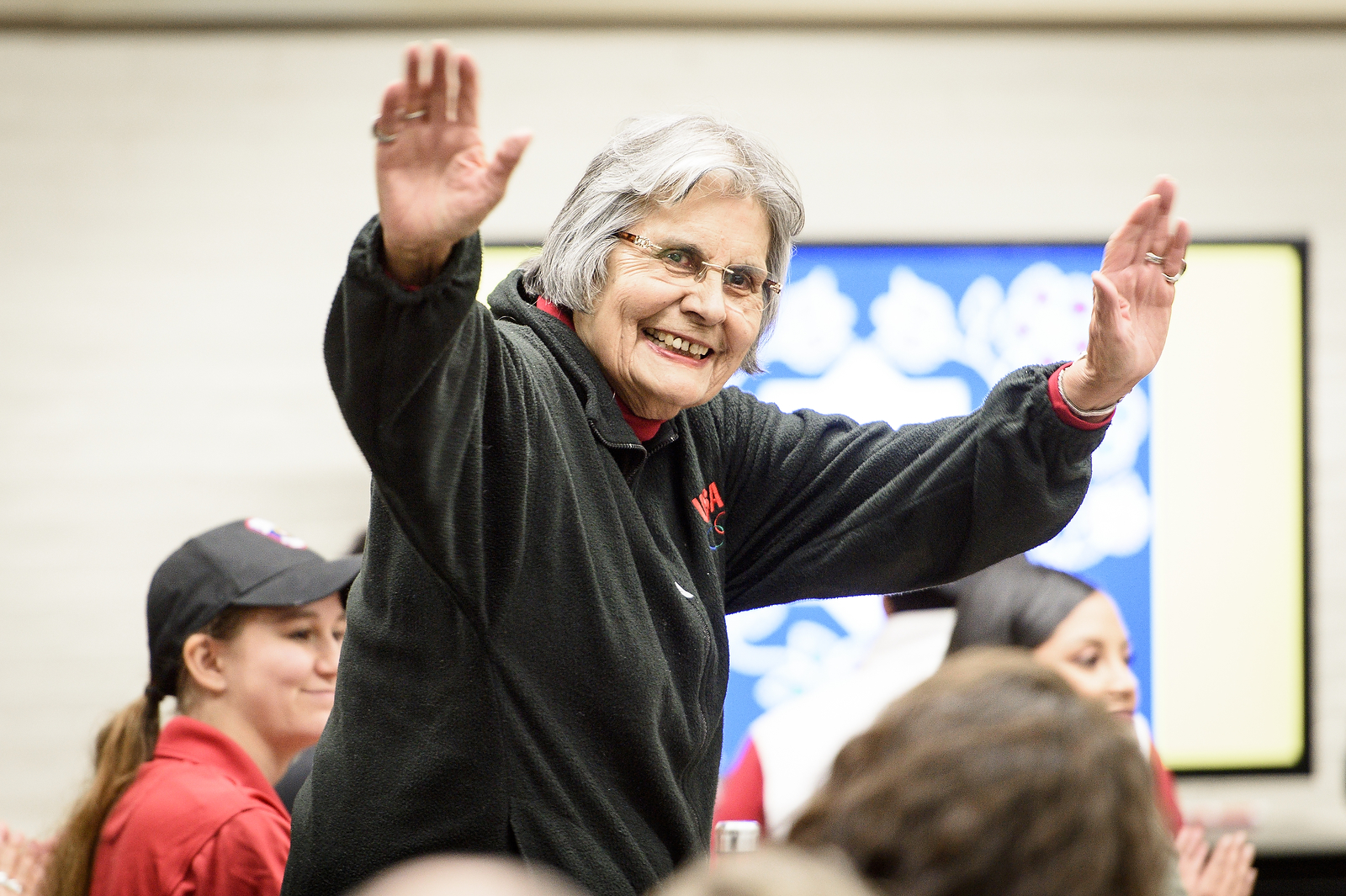 Ada Deer, a champion of Native American rights and the first participant in the new UW–Madison Elder-In-Residence Program, greets the audience at a November event. Photo: Bryce Richter

When we think of firsts, we often think of the first person who was successful – in the case of politics, the first to win. But to get to success, there has to be others who are the first to try.

Forty years ago, UW–Madison alumna Ada Deer was knocking on doors, waiting for them to open.

People were confused. Who was this confident woman in front of them? Most political candidates were men, not women. And they certainly weren’t Native American.

“I didn’t pay much attention. People are always criticizing you no matter what you do,” Deer says. “I just did what I thought was right. And a lot of people came along with me.”

While she didn’t win in 1978 or in 1992, when she became the first Native American woman to run for congress in Wisconsin, she paved the way for others.

History was made in November with the election of the first Native American women to Congress: Deb Haaland of New Mexico, a member of the Pueblo of Laguna, and Sharice Davids of Kansas, a member of the Ho-Chunk Nation.

The 2018 midterm elections were full of firsts for women – Rashida Tlaib of Michigan and Ilhan Omar of Minnesota are the first Muslim women set to represent their states in the House of Representatives. Alexandria Ocasio-Cortez of New York and Abby Finkenauer of Iowa are, at age 29, due to be the youngest women to serve in the House. Veronica Escobar and Sylvia Garcia will become the first Latinas to represent Texas in Congress. Ayanna Pressley will be the first women of color elected to represent Massachusetts.

“We’ve made a lot of progress. We have to make a lot more,” Deer says. “Watch out. We’re just getting started.”

Deer grew up living in a log cabin near the Wolf River on the Menominee Indian Reservation in Keshena, Wisconsin. There was no running water or electricity.

It was quite a change for her mother, Constance, who was from a well-to-do family in Philadelphia. A strong-minded young woman, she’d left her home to work as a nurse in Appalachia and on the Rosebud Reservation in South Dakota, where she attended powwows and learned to ride horses.

“She had this penchant for different people,” Deer says. “She was totally entranced by the native culture. Everything was very interesting to her.”

Where are the horses? Constance asked when she moved to Wisconsin to work on the Menominee Indian Reservation. Talk to Joe Deer, she was told. They soon married and raised five children together.

Joe Deer worked at the tribal lumber mill. Money was scarce. It didn’t help that he drank. A lot.

He was always angry. That anger was taken out on the family, particularly Constance. As a child, Ada didn’t understand. As an adult, she traces the roots to his mother’s death during the flu epidemic of 1918 and to his removal from his family to a Catholic boarding school for Native American children. The idea was to conform – children were punished for speaking their tribe’s language. Tribal clothing was taken away, replaced by uniforms. Their given tribal names were gone.

In recent years, more and more people have shared their stories of violence, shame and the loss of their culture they experienced growing up in those boarding schools.

Today, Deer has great compassion for her father and endless gratitude for her mother.

“Even though our father was hard, our mother gave us a lot of love,” she says.

Deer was the oldest of the five children and helped take care of her siblings. Her mother started bringing her to Menominee general council meetings when she was 4. Deer would watch as the grownups talked about grownup things. So the adults do this, she thought to herself. At the time, the best part was the free lunch, but those meetings stuck with her.

“Our mother did her best to expose us to the world,” Deer says. “Too many Indian people are restricted to their world.”

Deer always loved to learn. For her, it was a way to make the world a bit bigger. The reservation didn’t have a high school so Deer went to public schools in Shawano and Milwaukee.

She visited UW–Madison for the first time as part of Badgers Girls State, a government and leadership program for high school students. She stayed in a residence hall, met people from across the state and visited the State Capitol. She loved it all.

Deer soon came back to campus, this time as a college student on a tribal scholarship.

She says that at the time, for many female students, “the goal of coming to college was to get a Mrs. Degree. If you happened to get a B.A. or B.S. that was fine but that was secondary.”

Not for Deer. She had too much she wanted to do and decided early on she didn’t want children or a husband.

Deer was a social worker in New York and Minneapolis public schools and also worked with the Peace Corps in Puerto Rico. She later returned to UW–Madison as a law school student but left after one semester to help her tribe.

In the 1950s, the federal government initiated a termination policy that led to the creation of a corporate body to manage the Menominee tribe. Deer helped to organize a grassroots organization to restore federal recognition of the tribe, known as Determination of Right and Unity for Menominee Shareholders, or DRUMS.

“Mainly I want to show people who say nothing can be done in this society that it just isn’t so,” Deer told The Washington Post in 1973. “You don’t have to collapse just because there’s federal law in your way. Change it!”

On Dec. 22, 1973, President Richard Nixon signed the law restoring official federal recognition to the Menominee tribe. Deer became the first woman to chair the tribe in Wisconsin, a position she held from 1974 to 1976.

Deer once again returned to UW–Madison in 1977 as a lecturer in the American Indian Studies program and the School of Social Work where she taught until 1993, when President Bill Clinton appointed her to head the Bureau of Indian Affairs. She was the first woman to do so and helped set policy for more than 550 federally recognized tribes.

“At Menominee, we collectively discovered the kind of determination that human beings only find in times of impending destruction,” Deer told the Senate Committee on Indian Affairs during her confirmation hearing. “Against all odds, we invented a new policy – restoration. This legislation is a vivid reminder of how great a government can be when it is large enough to admit and rectify its mistakes. It is also indicative of my tribe’s spirit, tenacity, and ability to hold other sovereign entities accountable.” 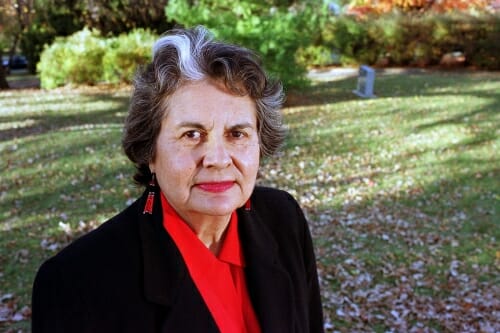 Ada Deer, pictured in 1999, has lived a lifetime of firsts, including becoming the first member of the Menominee to graduate from UW–Madison, receiving her bachelor’s in social work in 1957. Growing up, her mother would tell her, “Be yourself.” Easier said than done. “It’s hard work being yourself because you have to figure out who you are,” Deer says. “Lots of people don’t really know who they are.” Brian Moore

From 2000 to 2007, Deer directed the American Indian Studies Program at UW–Madison.

In 2010, she was recognized by the National Association of Social Workers as a Social Work Pioneer for her work as an advocate and organizer on behalf of American Indians.

Now 83, Deer visited campus in November as part of the Culture Keepers/Elders-in-Residence Program, a new UW–Madison initiative to improve the experience of American Indian and Alaskan Native students by hosting Native elders on campus for extended visits and educational exchanges. Its goals include: strengthening partnerships between tribal nations and the university; providing all students with access to crucial cultural resources; and improving retention and recruitment rates for Native students.

“Ada is the perfect community leader to launch this program,” says Larry Nesper, a professor of anthropology and American Indian studies and director of the American Indian Studies Program. “She has broken down so many barriers and achieved so many ‘firsts.’ She’s an amazing role model.”

Speaking up, speaking out

Deer credits her mother for her confidence and conviction.

“My mother was a fierce crusader for Indian rights,” she said during her confirmation hearing. “Many a tribal leader and lawyer would grow more than a little apprehensive upon her approach. Many would think, ‘Here comes Connie Deer and it looks like she has something on her mind.’ I am told that there are people who have said the same thing about her oldest daughter.”

It’s hard to imagine Deer any other way.

“I speak up. I speak out,” she says. “It’s not like I plotted and planned. I just had this general goal. I want to do and I want to be and I want to help. And I’ve been able to do it.