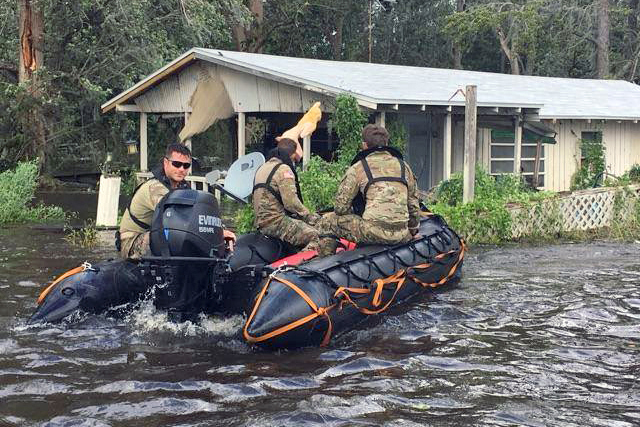 Hurricanes are heat engines, Harold Tobin, a professor of geoscience, explained Tuesday to his new University of Wisconsin–Madison class on natural hazards.

Meanwhile, the tattered remains of Hurricane Irma, having left an epic track of devastation across more than 1,000 miles, churned through Northern Florida and into Georgia, as Houston continued bailing out from Hurricane Harvey’s biblical flood.

To the east, Hurricane Jose looked set for a quick turn to the north. 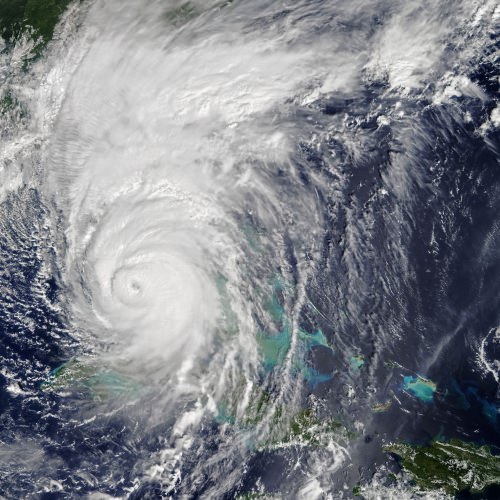 With the human misery caused by the twin hurricanes all over the headlines, Tobin wanted to explain the backdrop – the whys and wherefores of cyclones – to a capacity crowd of 75 undergraduate students.

In a session blending physics and earth science, Tobin explained the source of Irma’s energy, the role of atmospheric pressure and how the storm track affects the intensity of the deadly storm surge. He touched on why tropical cyclones — as hurricanes and typhoons are known in the trade—occur in bands north and south of the equator, but not within five degrees of the equator itself.

When Tobin was planning the course last spring, he figured that natural disasters, including earthquakes, tsunamis, volcanoes and tornadoes, take place essentially all the time, but he could not know that hurricanes and wildfires would own the news cycle, and that even before September was half over, that Mexico would see its largest earthquake in a century.

“I’ve wanted to teach this for a long time,” he says, and students responded. “We listed it in the course guide, and without any advertising at all, it filled up in two days.” 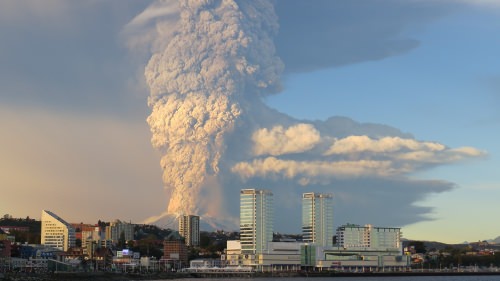 The eruption of Calbuco volcano threatens the city of Puerto Montt in southern Chile in 2015. Carolina Barria Kemp, Wikimedia

Geoscience 140, Natural Hazards and Disasters, uses current events to teach the science behind the news, but it also examines how government policies and human choices affect risk. “Something can have big destructive potential  — like Irma — but risk is determined by what’s in the way,” Tobin says. “If a monster hurricane strikes a sparsely populated region, it’s unlikely to cause major harm, but if it hits Houston, Miami or New Orleans, it’s a different story.”

In a similar vein, the risk of wildfires is intensified by accelerated building in flammable habitat, particularly after a legacy of fire suppression has left an abundance of fuel.

Tobin will also cover landslides, other types of floods, and gradual natural disasters like droughts, disturbances in monsoon rains, and rising sea level. He will address difficult issues like designing a fair flood insurance program that will discourage building in vulnerable areas.

“Natural hazards – especially earthquakes and the tsunamis they cause — are enormously dangerous, but I stress that there are ways to reduce the risks,” Tobin says.

Stronger buildings reduce the death toll in earthquakes, and this year’s two hurricanes show the critical value of weather forecasting, he adds. “Hurricanes and storms cause the greatest loss of property annually, but thankfully not so much loss of life, because meteorologists are very good at forecasting them. In contrast, earthquakes and tsunamis have had by far the biggest death toll in recent years, because we still have no means of predicting when they will strike.”

Even though we call them “natural” disasters, “it’s not just chemistry, physics and earth science that are at play,” Tobin says. “It’s also a matter of the social decisions that we make every day, sometimes without understanding the ramifications.”