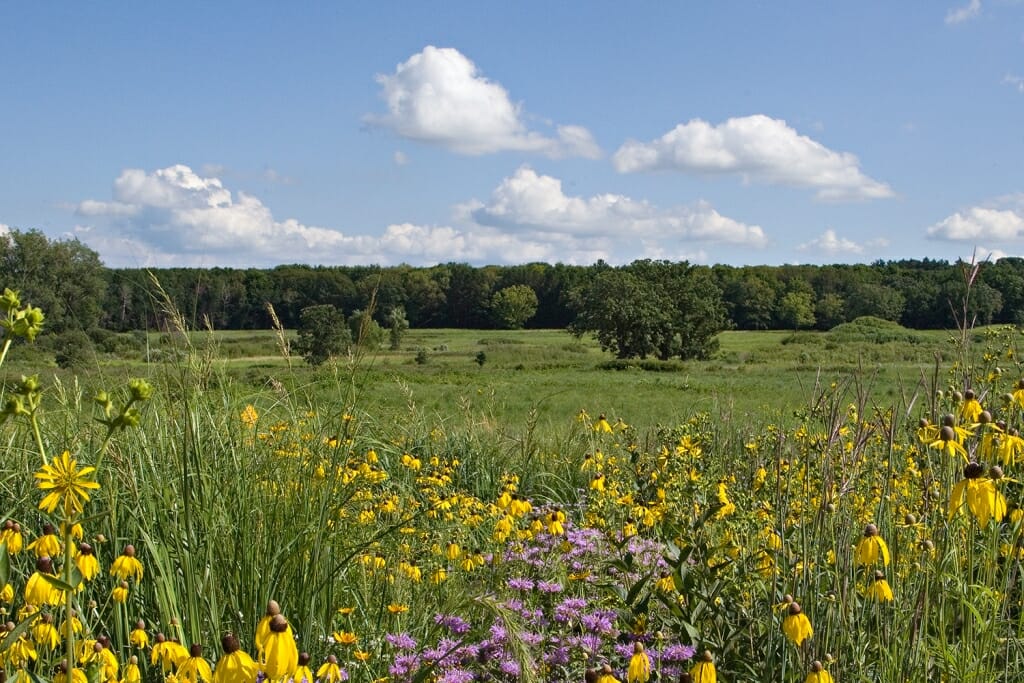 Curtis Prairie, seen from the Wisconsin Native Plant Garden, is regarded as the oldest restored prairie in the world. UW–Madison Arboretum

The University of Wisconsin–Madison Arboretum has been designated as a National Historic Landmark by the National Park Service. The designation is based on the Arboretum’s pioneering work in restoration ecology, its place in the history of conservation, and its commitment to Aldo Leopold’s land ethic.

The UW–Madison Arboretum was established in the 1930s as an outdoor laboratory to study how to repair damaged and degraded landscapes. Its function, according to Leopold in his 1934 dedication speech, was to be “a reconstructed sample of old Wisconsin, to serve as a benchmark, a starting point, in the long and laborious job of building a permanent and mutually beneficial relationship” between people and the landscape.

Early experiments and research generated a better understanding of local ecosystems, contributed to the development of effective restoration and management practices, and helped define the field of ecological restoration. 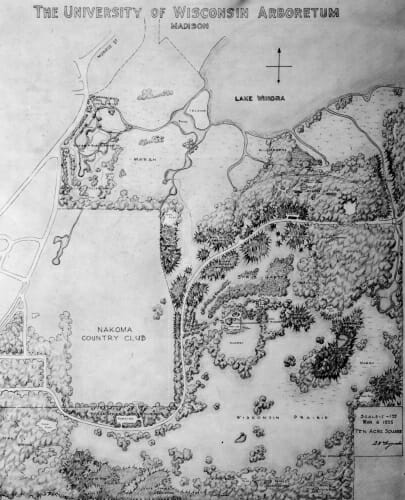 A map of the early Arboretum by G. William Longenecker, March 6, 1935. UW Archives

The National Historic Landmark program designates places that represent an outstanding aspect of American history and culture. To be recognized as a National Landmark, a site must go through a rigorous nomination process. Then it must be evaluated by the National Park Service’s National Historic Landmark Survey, reviewed by the National Park System Advisory Board, and recommended to the secretary of the interior, who makes the final decision. The Arboretum was listed in January 2021.

The Arboretum’s landmark designation is based on a “period of national significance” that begins in 1933 with the first forest plantings. Notable experiments sought to understand and restore prairie, savanna and marsh communities; study fire ecology and test the use of prescribed fire; and implement an adaptive approach to land management, incorporating built-in experiments designed to inform practice. This period ends in 1966 with the retirement of G. William Longenecker, executive director from 1933–66, and the death of Henry Greene, instructor in the UW–Madison botany department and collection curator in what is now the Wisconsin State Herbarium.

“The Arboretum is truly deserving of this honor for its significant role in decades of research into relationships between people and the land through science, stewardship and education,” says UW–Madison Chancellor Rebecca Blank. “While historic, the Arboretum is not frozen in time. It is widely regarded as a renowned living laboratory for studies into sustainable ecological restoration. The Arboretum has exceptional value as a place cherished by scientists and recreationalists alike.” 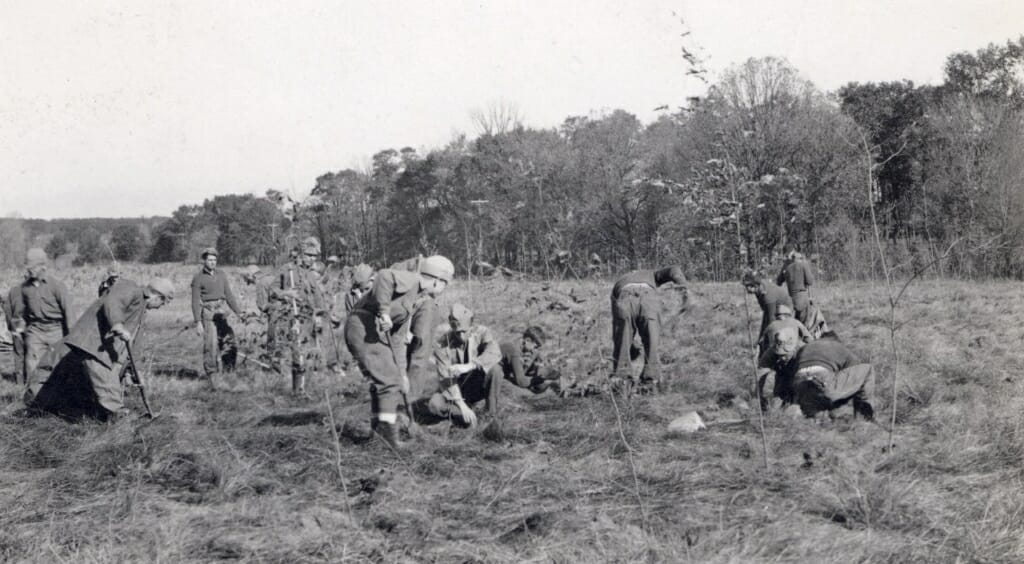 Today the Arboretum manages some of the nation’s oldest restored ecological communities, including two prairies that are widely respected prairie restorations. Curtis Prairie, begun as experimental plots in 1935, is regarded as the oldest restored prairie in the world. Greene Prairie, hand planted by Henry Greene over two decades starting in 1943, is considered one of the finest examples of a restored prairie in the U.S.

Arboretum Director Karen Oberhauser says that this designation provides important recognition of the need for restoration ecology to consider the past, present and future, since protecting ecosystems against invasive species, habitat loss, climate change and environmental pollutants requires ongoing vigilance.

“This designation hopefully highlights the Arboretum in a long line of land stewards: the Indigenous peoples who began living in the region 12,000 years ago, the Ho-Chunk people who have cared for the land long before Euro-American colonization, the Arboretum’s founders, whose vision and hard work led to our establishment in the 1930s, and the next generation of land caretakers we are helping to train,” says Oberhauser.

Knowledge gained at the Arboretum has been disseminated through scientific publications, trainings, conferences, and the careers of UW–Madison graduates in ecological, conservation and restoration fields. Principles and practices explored at the Arboretum are taught, adopted and implemented on natural lands throughout the world. While restoration research and land care have continued uninterrupted, ecological threats unforeseen by early conservationists pose new challenges and restoration practices continually adapt to address them. 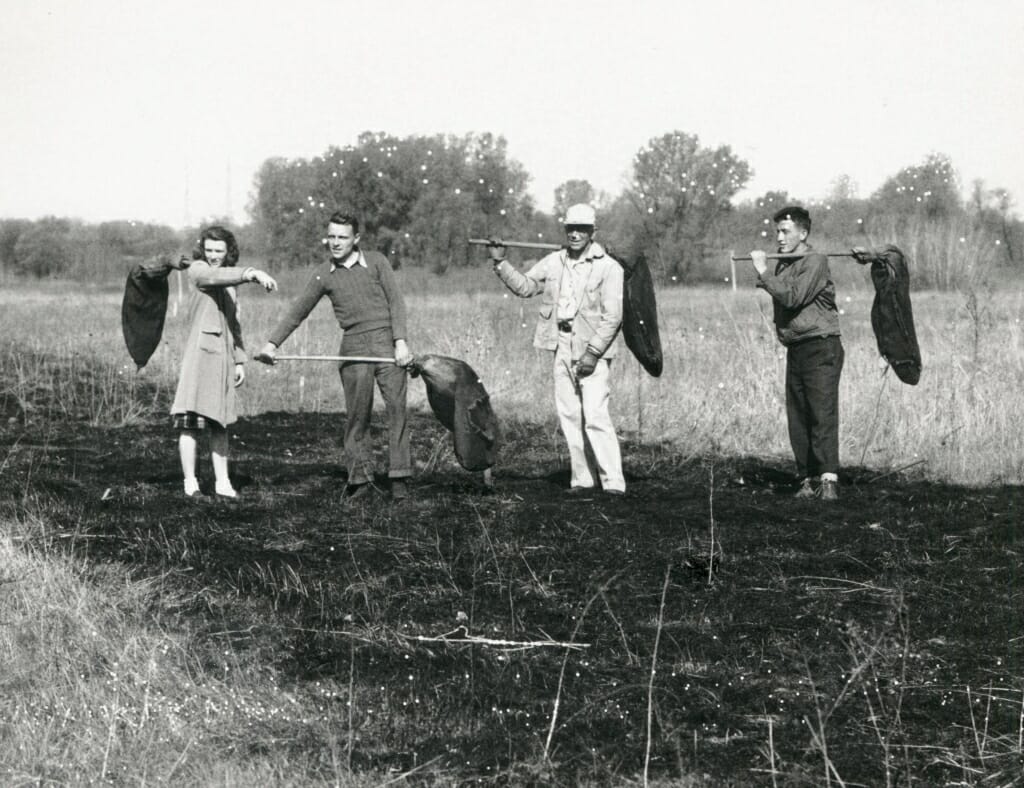 Aldo Leopold with a group in the Arboretum, performing a controlled prairie burn, ca. 1940–45. UW Archives

“The designation of the Arboretum as a National Historic Landmark is truly an honor, and it’s the 44th property in Wisconsin to achieve this recognition of its exceptional importance to American history and culture,” said Daina Penkiunas, state historic preservation officer for the Wisconsin Historical Society. “Wisconsin’s National Historic Landmarks include our State Capitol, Frank Lloyd Wright’s home Taliesin, and Milwaukee’s Soldier’s Home complex. The University of Wisconsin Arboretum adds another chapter to the national story.”

Working with the Wisconsin State Historic Preservation Office at the Wisconsin Historical Society, the Arboretum was listed on the National Register of Historic Places in 2019. The National Register is the official list of historic properties worthy of preservation. The listing recognizes the significance of the Arboretum within local, statewide and national history.

“The Arboretum is not only a historic landmark. It is a great example of the Wisconsin Idea in action, as a place where research and education are far reaching and impactful,” says Steve Ackerman, vice chancellor for research and graduate education. “The knowledge gained at the Arboretum helps lead to healthier lifestyles and a healthier environment.” 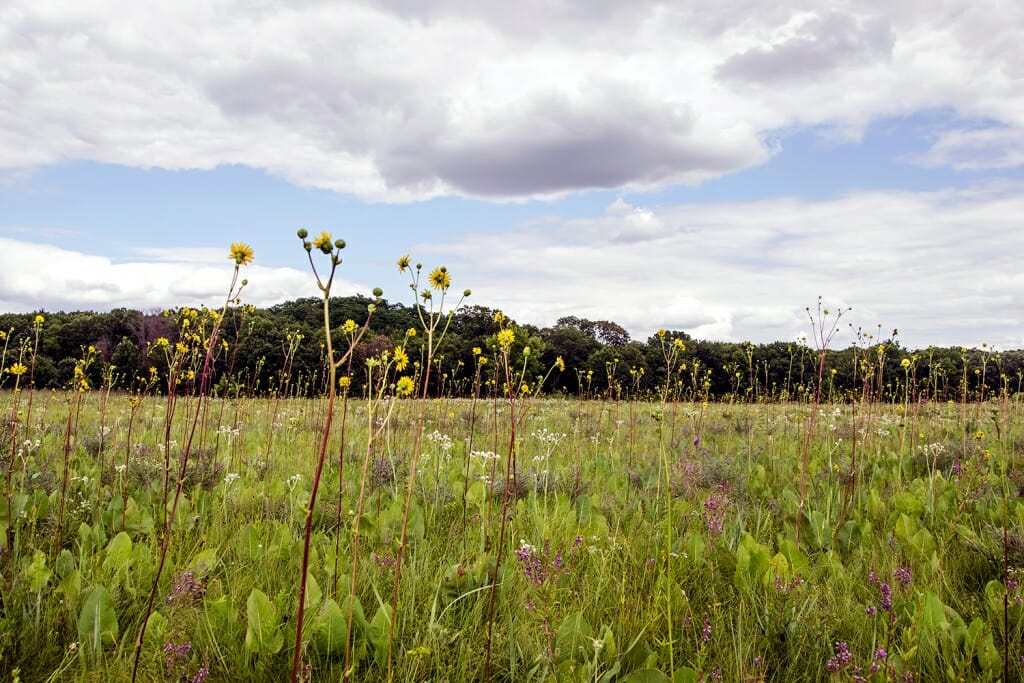 Greene Prairie, hand planted by Henry Greene over two decades starting in 1943, is considered one of the finest examples of a restored prairie in the U.S. UW–Madison Arboretum