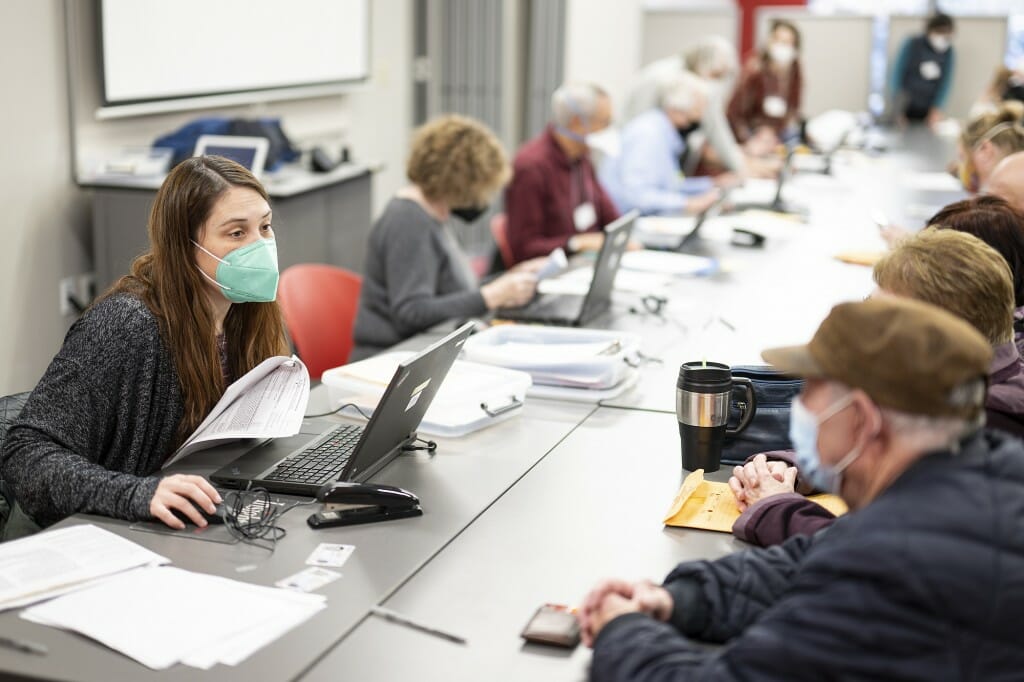 “It’s such a great feeling to see so many people using this space,” says Brenda González, who oversees the site as director of community relations for the University of Wisconsin–Madison. “We’re trying to follow the Wisconsin Idea of being a good neighbor. We’re listening to what the community wants and responding to that.”

As the UW South Madison Partnership marks its seventh anniversary this month, it is also celebrating the official opening of its greatly expanded space at The Village on Park, 2238 S. Park St. in Madison. 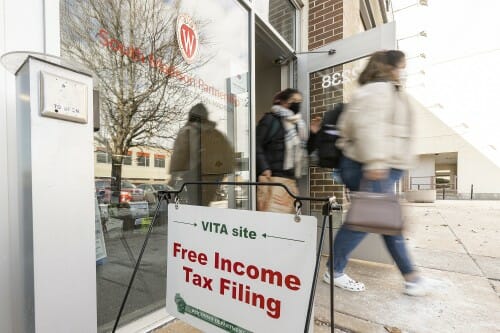 The free tax preparation service at the UW South Madison Partnership is sponsored by Dane County UW–Extension, the City of Madison, UW–Madison, the IRS and the Wisconsin Department of Revenue. Photo: Bryce Richter

The partnership outgrew its previous space elsewhere in the city-owned mall. The expansion more than quadruples its footprint from 3,015 square feet to 12,902. The new space has five private offices, seven classrooms/conference rooms, a computer lab, co-working spaces, a kitchenette and an open gathering space. The expansion meets current demand and offers room for sustained growth over time.

Since its founding in 2015, the UW South Madison Partnership has added a new dimension to one of the university’s oldest guiding principles — the Wisconsin Idea notion that discoveries and innovations should move from the campus to the community to improve people’s lives. The partnership also highlights the equally important notion that communities have valuable insights and knowledge to share with the university.

“By anchoring the university in the community, the partnership allows us to begin the discovery process by listening to, and learning from, the individuals we hope to serve,” says Chancellor Rebecca Blank. “The result of this deeper connection is an innovative set of programs that strengthen and expand the work of our community partners and truly meet people’s needs. I am excited to see these programs continue to grow and evolve in the partnership’s beautiful new space.”

UW–Madison students, faculty and staff have a long history of working in partnership with the South Madison community. Seven years ago, the university formalized this relationship through the UW South Madison Partnership, providing dedicated space for a multitude of new and existing programs. The effort connects UW–Madison with an area of the city whose residents historically have had less access to university programs and resources.

“To go out into the community and offer a facility like this is a really beautiful thing,” says Elsa Caetano, who lives nearby and stopped in for tax advice. “It’s also a way to diversify the university — there are so many people coming and going from all walks of life. It’s great to see.” 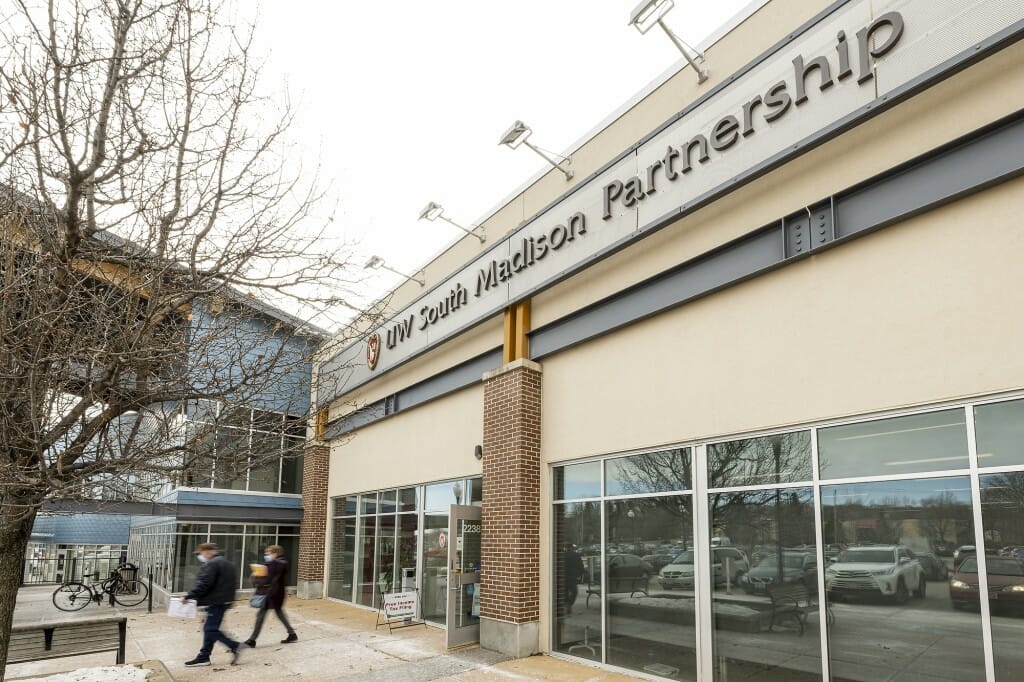 As the UW South Madison Partnership marks its seventh anniversary, it is also celebrating the official opening of its greatly expanded space at The Village on Park. Photo: Bryce Richter

During the fall semester, the site averaged 1,300 visitors a month and 83 hours of use each week. The space was used by 15 community partners, six UW schools and colleges, and eight UW divisions, centers and institutes.

Some of the partners have been with the space since the start, like UW Odyssey Project, the Neighborhood Law Clinic and the Wisconsin Alzheimer’s Disease Research Center. Others, like the Richard Dilley Tax Center, are new this year. The center provides free tax preparation to residents with low incomes, older adults, people with disabilities and others. It is the busiest tax site of its kind in the state.

Another new partner is the Madison School District. The “micro school” at the site, called Blue Lion High, serves sophomores and juniors from West High School who need to earn credits at an accelerated rate to graduate with their classmates. Many of the students live in the neighborhood.

“Being from the south side of Madison myself, I love that you can come down Park Street and see so much investment in this area now, from the UW space to the Urban League building to the new public library,” says Delia Watkins, a teacher at the micro school. “As people of color in this community, we need to see that commitment. It speaks volumes.”

She and co-teacher Crystal Hendrix are pleased that the high school students attending the micro school get a feel for UW–Madison, even subconsciously.

“It’s like a mini university campus here, so they’re getting familiar with the idea of a postsecondary education and may aspire to that,” says Hendrix. “It’s forward-thinking.” 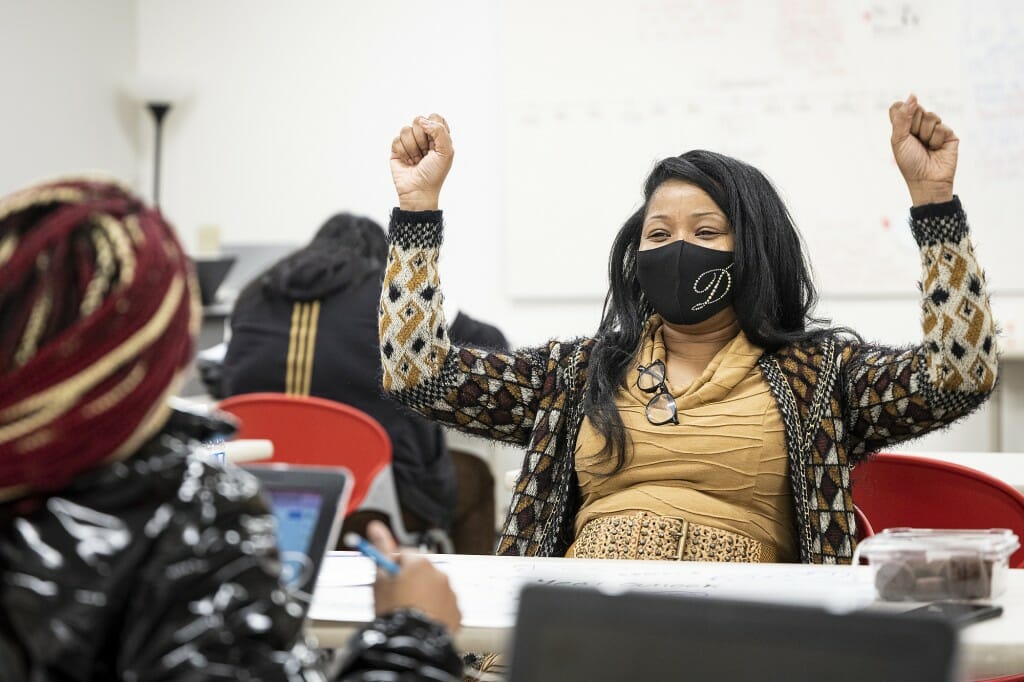 Also new to the site is the Center for Patient Partnerships, an interdisciplinary entity based at the University of Wisconsin Law School that provides patient advocacy and education. The lead staff members for the center’s Community Resource Navigator Program are now based at the Park Street site, and dozens of UW service-learning students assist at the site each semester.

For clients, the site offers easy accessibility and parking in a setting that is less intimidating than the central campus, says Jill Jacklitz, co-director. Most people know how to get to The Village on Park, she says — or for sure, Lane’s Bakery, another tenant in the mall.

“It’s been transformative for us to be here,” she says. “It’s really made us feel embedded in the community.”

Because of the expansion, the UW Odyssey Project, a longtime partner, has been able to consolidate sites and quadruple its overall space for its much-lauded approach to breaking the cycle of generational poverty through education. 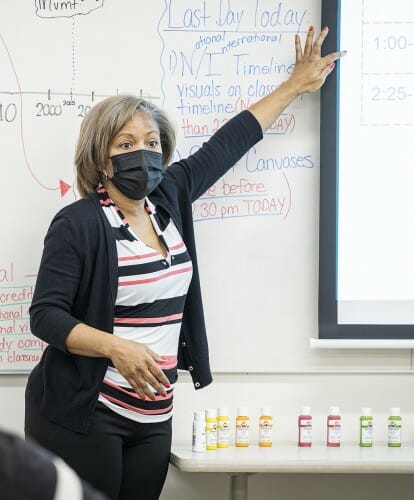 Odyssey now has four components: the core Odyssey class empowering 30 adults each year through a two-semester journey in the humanities; Odyssey Junior, providing enrichment for their children and grandchildren; Onward Odyssey, offering continued support and classwork for graduates of the program going on to degrees; and Odyssey Beyond Bars, bringing both enrichment and UW–Madison credits to people in Wisconsin prisons.

“As the pandemic eases, we hope to offer computer labs, family movie nights, peer support groups, and other activities in the new space,” says professor Emily Auerbach, founder and co-director. “The space will better serve Odyssey’s mission of creating a community to encourage families to overcome obstacles and achieve their dreams.”

“It’s not the university imposing itself on a community,” González says. “It’s the community inviting us in and telling us what it needs from us so that we can be a good neighbor. I hope that approach shapes our future even more. We still need to invite others into this collaboration, and we have every intention of doing so.”

Subscribe to email updates from the UW South Madison Partnership and the Office of Community Relations, including event announcements and the latest news.