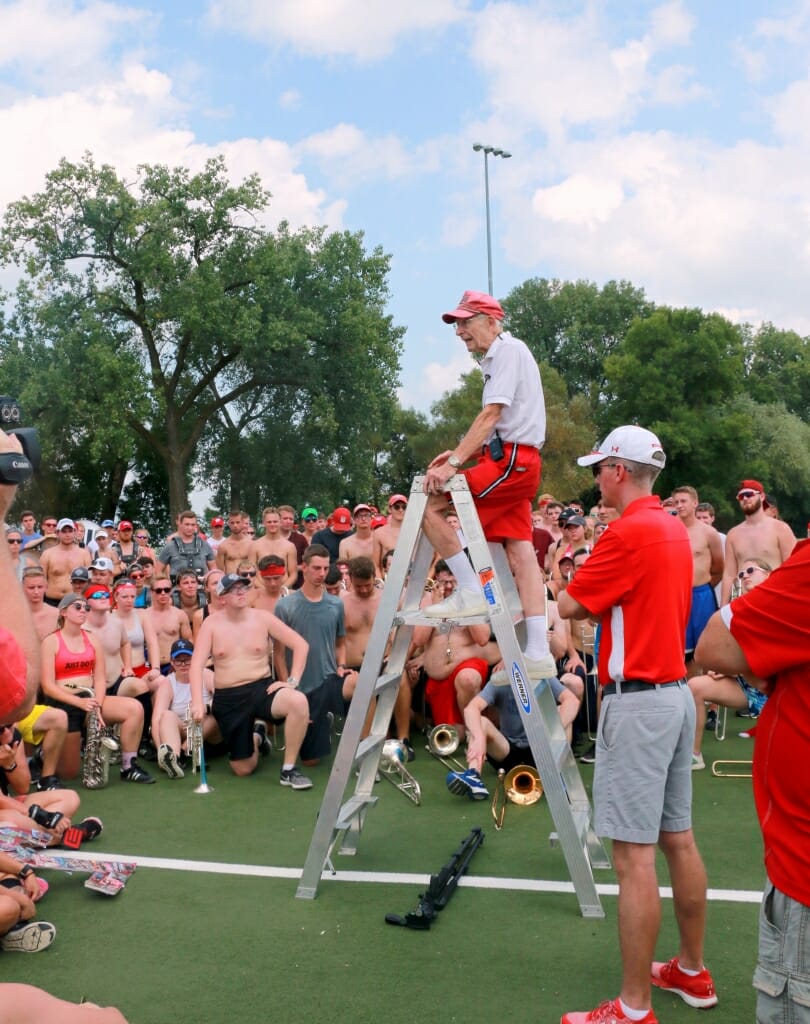 Following band practice on Aug, 25, UW Marching Band Director Michael Leckrone, 82, announces to band members his plan to retire from his position at the end of the 2018-19 academic year. Photo by Gary Smith / UW Band 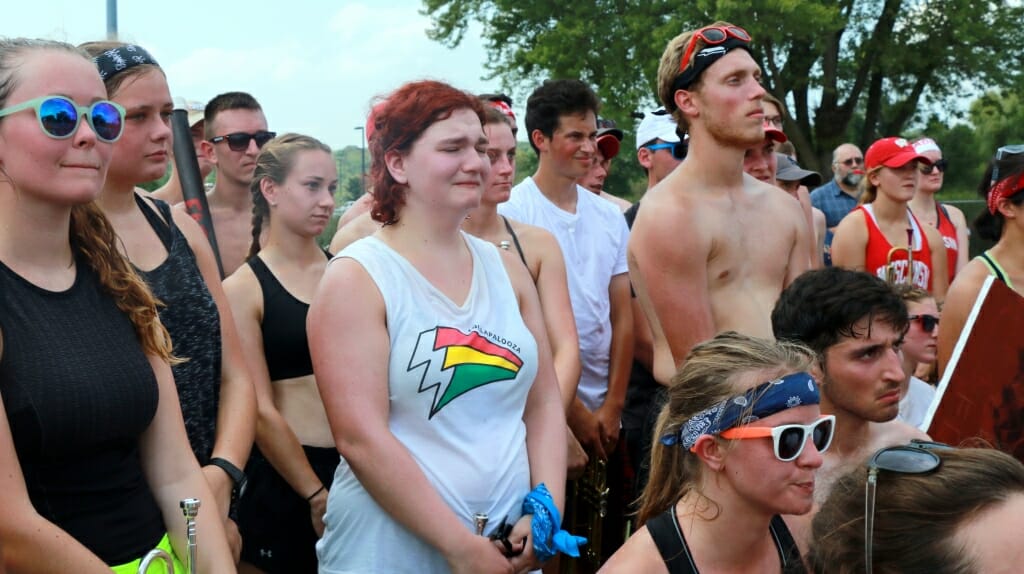 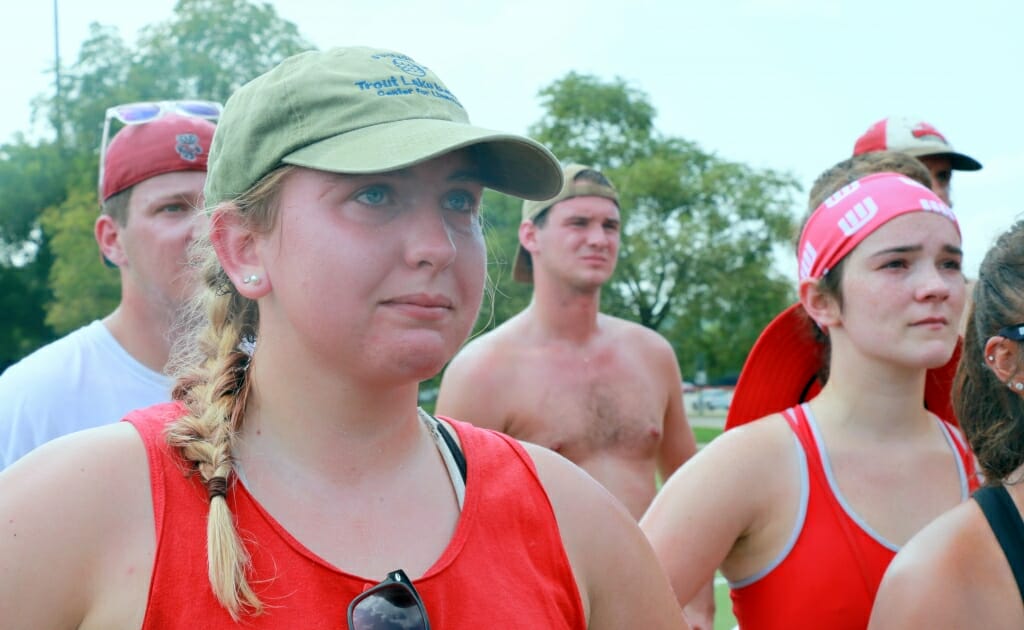 The announcement came as a surprise to band members. This final season marks Leckrone's 50th year as UW Marching Band Director, a position he began in 1969. Photo by Gary Smith / UW Band 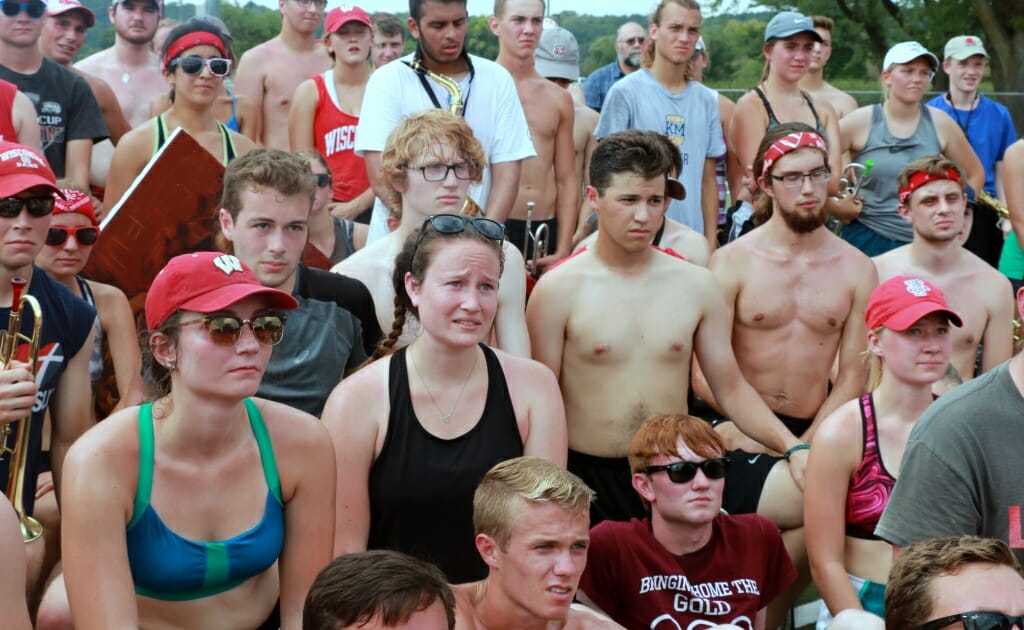 The 300-member UW Marching Band — the champions of Camp Randall’s Fifth Quarter — uses the two weeks before the fall semester kicks off for an intense refresher and a strenuous testing ground. Photo by Gary Smith / UW Band 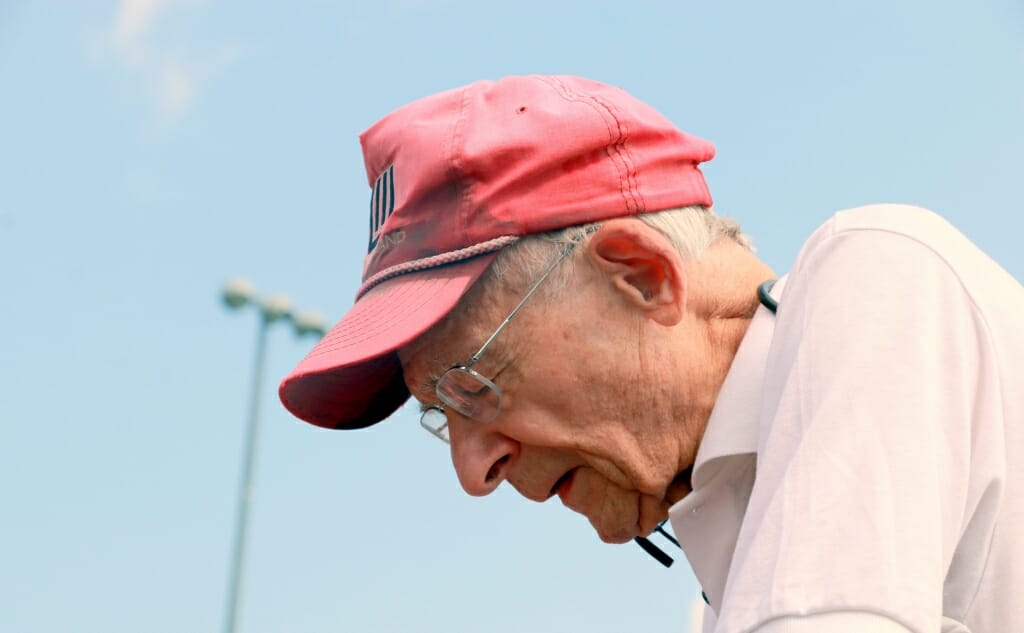 Leckone was inducted into the UW Athletic Hall of Fame in 2017. More than 200 of his arrangements and compositions for marching band and concert band have been published. Photo by Gary Smith / UW Band

Michael Leckrone, longtime director of the University of Wisconsin–Madison Marching Band, announced today that he will step down at the end of the 2018-19 academic year.

He made the announcement to the band following rehearsal. Students were visibly moved, linking arms and joining with him to sing “Varsity.”

This is Leckrone’s 50th year leading “The Badger Band.” He made his decision a few weeks ago but delayed sharing it publicly until he could meet with students. “I wanted the band to know first,” he says. “Any other talk, any other planning — that came second.”

The university will conduct a national search for a new director.

Leckrone, 82, has not decided on future plans and says there is no significance to the timing. “I wanted to go before somebody told me to go,” he quips. “No, really, it was going to happen sooner or later, and I didn’t want to stay on too long.”

This fall he will have been on the field of Camp Randall for 50 of the stadium’s 101 years. Only Bucky Badger has reigned there longer.

His wife, Phyllis Bechtold Leckrone, passed away a year ago this month. They were married for 62 years.

Leckrone has had a remarkable career as an educator and conductor. He has won myriad awards and in 2017 was inducted into the UW Athletic Hall Fame. More than 200 of his arrangements and compositions for marching band and concert band have been published. He is the author of two texts for marching band directors, a handbook for band arranging and a text about popular music in the United States. 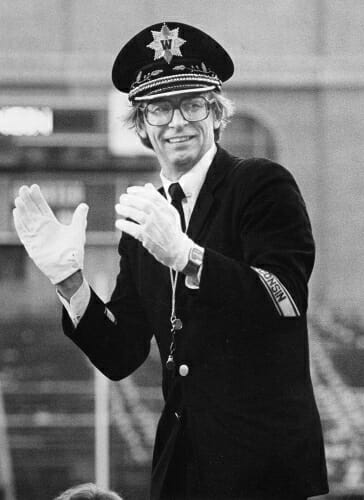 His impact on campus has been legendary. This fall he will have been on the field of Camp Randall for 50 of the stadium’s 101 years. Only Bucky Badger has reigned there longer, and then only by 20 years. Band members have married and seen their children and then grandchildren under his tutelage. The band has attended 16 bowl games under Leckrone’s direction.

“We are immensely grateful to Mike for the joy he’s brought to generations of Badgers on the football field and in the concert hall. Every time I watch them perform at a football game, I think we have the best band in the country,” says Chancellor Rebecca Blank. “Under his leadership, the band has been a valued part of our campus – I know that will continue.”

“Mike’s record of service is enviable,” says Susan Cook, director of UW–Madison’s Mead Witter School of Music. “He has given tirelessly to the School of Music’s athletic band program and to the university at large, and with his remarkable years of teaching has provided models of musical leadership.”

“What I especially appreciate about Mike,” she adds, “is his commitment to his students. He cares deeply for the students and it shows in all that he does.”

Leckrone is recognized by peers around the country as a titan in the field.

“We are immensely grateful to Mike for the joy he’s brought to generations of Badgers … Every time I watch them perform at a football game, I think we have the best band in the country.”

Leckrone was hired by the late Dale Gilbert, then director of the UW School of Music. His son, Jay Gilbert, is now chair of the music department at Doane University in Nebraska.

“For those of us who have followed in his footsteps as band directors and know him well, we are awed by his incredible musical gifts,” says Jay Gilbert. One of his favorite memories from the 1970s is marching back to the Mosse Humanities Building after a game.

“On the way, Mike would stop the band outside of the children’s ward of the University Hospital, which was in the center of campus at that time, where we would play a few tunes for the children,” he says. “We knew it was meaningful for him and it became meaningful for us.” 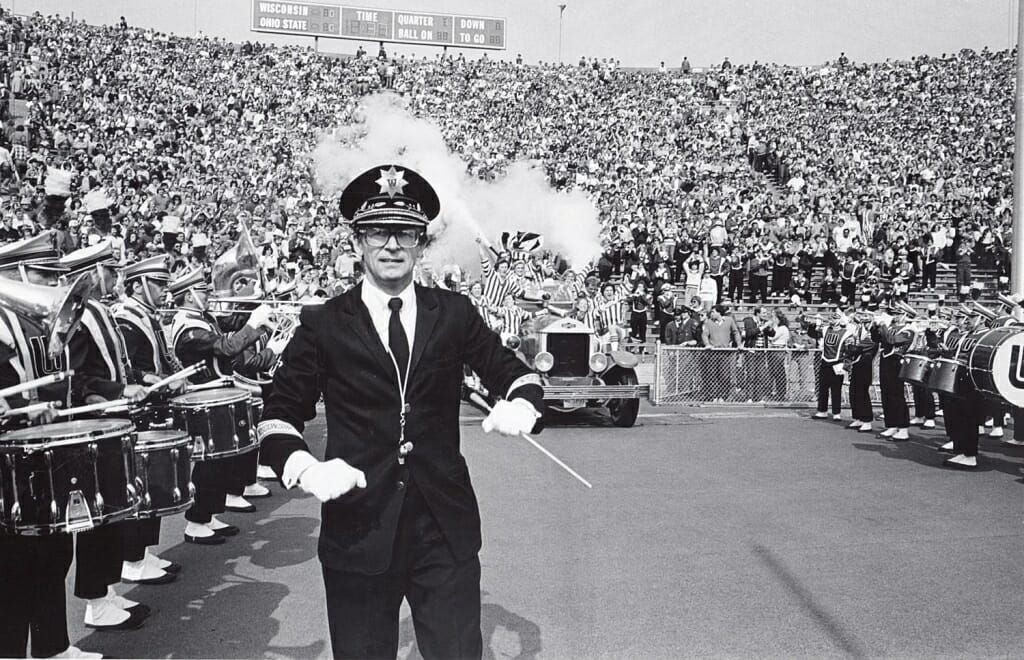 Leckrone conducting the band during the 1970s. This fall he will have been on the Camp Randall field for 50 of the stadium’s 101 years. The band has attended 16 bowl games under Leckrone’s direction. Photo: Norman Lenburg/UW Archives

In his early years, Leckrone found a partner in athletic director Elroy Hirsch. “He inspired me to do so many crazy things,” says Leckrone, such as riding onto the field on a camel and on an elephant, and departing Camp Randall on a palomino while the band played “Happy Trails.” Hirsch let the band play inside miniature tanks, bring in a calliope and clowns, and allowed a mock Superman to fly on a wire from the upper deck down to the band.

“I don’t ever remember Elroy saying no,” says Leckrone. “He was very important to what I was trying to do.”

Leckrone especially credits his field assistants, who (among other things) line the field to relay his hand movements. Some have been with him more than a decade. “They are primarily volunteers who saw a need to help and just did it.”

“For those of us who have followed in his footsteps as band directors and know him well, we are awed by his incredible musical gifts.”

In 1985, on the event of the band’s 100th anniversary, President Ronald Reagan wrote to congratulate Leckrone and the band. “Despite the discipline and long hours of preparing for concerts,” he noted, “you have had the good fortune of enjoying yourselves as you’ve entertained others.”

The hours have indeed been long, and the band has indeed enjoyed itself, notably during its famous postgame “Fifth Quarter,” a tradition that began in 1977.

The Marching Band is a one-credit class at the UW–Madison Mead Witter School of Music. In the spring semester it’s named Varsity Band, and students perform at indoor sports events, leading up to the three-night Varsity Band Concert, an annual concert extravaganza at the Kohl Center that draws as many as 21,000 fans from adjacent states and every county in Wisconsin, and is subsequently broadcast statewide on Wisconsin Public Television. 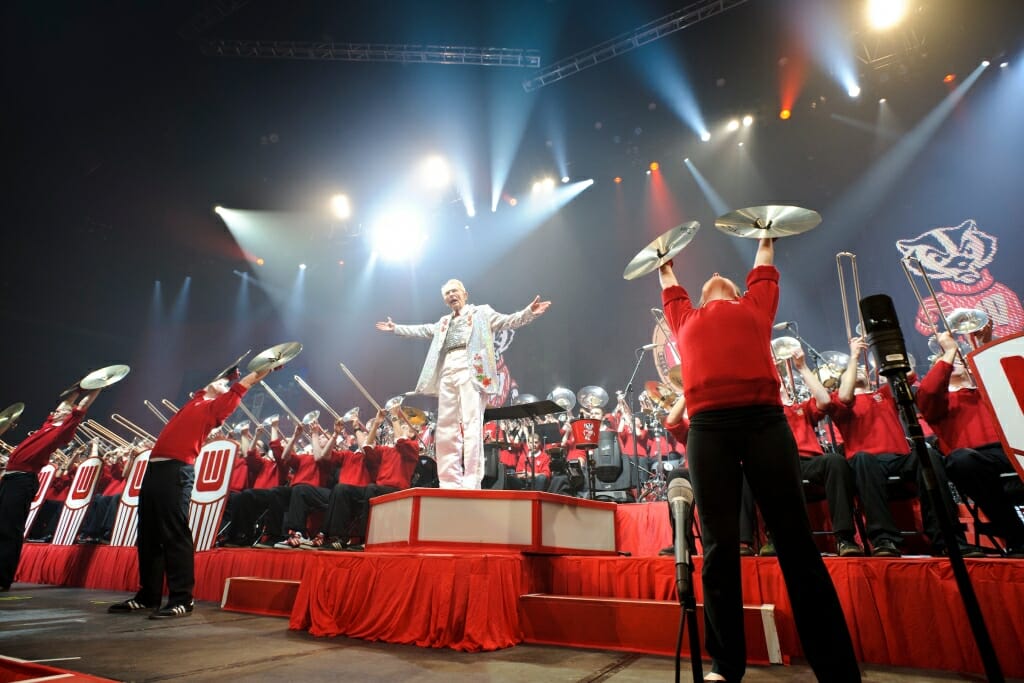 Leckrone turns to the audience during the the final song of the Varsity Band Spring Concert in April 2013. The annual concert extravaganza draws as many as 21,000 fans from adjacent states and every county in Wisconsin. Photo: Jeff Miller

The University of Wisconsin band was formed during the 1885-86 school year, as part of the University Military Battalion. The band’s second-longest-serving director was Ray Dvorak, a showman and noted John Philip Sousa scholar. A UW institution himself, Dvorak led the ensemble from 1934 to 1968. He instituted the singing of “Varsity” and its traditional hand-wave. He maintained the military band demeanor of the group’s early years.

He also gave his successor a supreme gift: “a clean slate,” says Leckrone. “Ray told me that it was my show now, and that he would never intrude, he would never second-guess me.”

However, on Monday mornings following a game, Dvorak often would stop by. “He’d tell me what a great show we’d had, and how much he enjoyed it,” recalls Leckrone. “And then he’d lean back and say, ‘Y’know, one thing I might have done …’”

Leckrone intends to give his successor the same freedom he enjoyed when he took over in 1969.

“It’s the band — all the students from all the years — who deserve the credit. I just happened to be the guy standing in front.”

By the end of Dvorak’s career, campus had undergone abrupt change. Leckrone arrived during the Vietnam War years, and he recalls protests and the smell of tear gas. “Marching around in a military uniform wasn’t exactly popular right then,” he says.

Band enrollment was down and, after two interim directors, morale was poor — especially when Leckrone instituted physical conditioning. Band members have since trained like athletes in order to perform the band’s particular high-step, called “stop at the top.”

Leckrone thoroughly remade the organization, including its distinctive uniforms, which he designed.

“It’s the band — all the students from all the years — who deserve the credit. I just happened to be the guy standing in front,” says Leckrone, “although, depending on where you sit in Camp Randall, maybe I was the guy in the back!”

Others see it differently. “Mike has given me and countless others the talents, ambition, energy and enthusiasm that few have or ever will,” says Tracz, who received his master’s in music at the UW. “In a world where we have all needed inspiration, Mike has been there to provide what we need.”

The School of Music includes three University Bands, the Concert Band and Wind Ensemble. Leckrone usually conducts the Concert Band each spring. As director of bands, he oversees them all, though many of these duties have already been passed to Professor Scott Teeple. Leckrone will also step down from these responsibilities at the end of the school year. 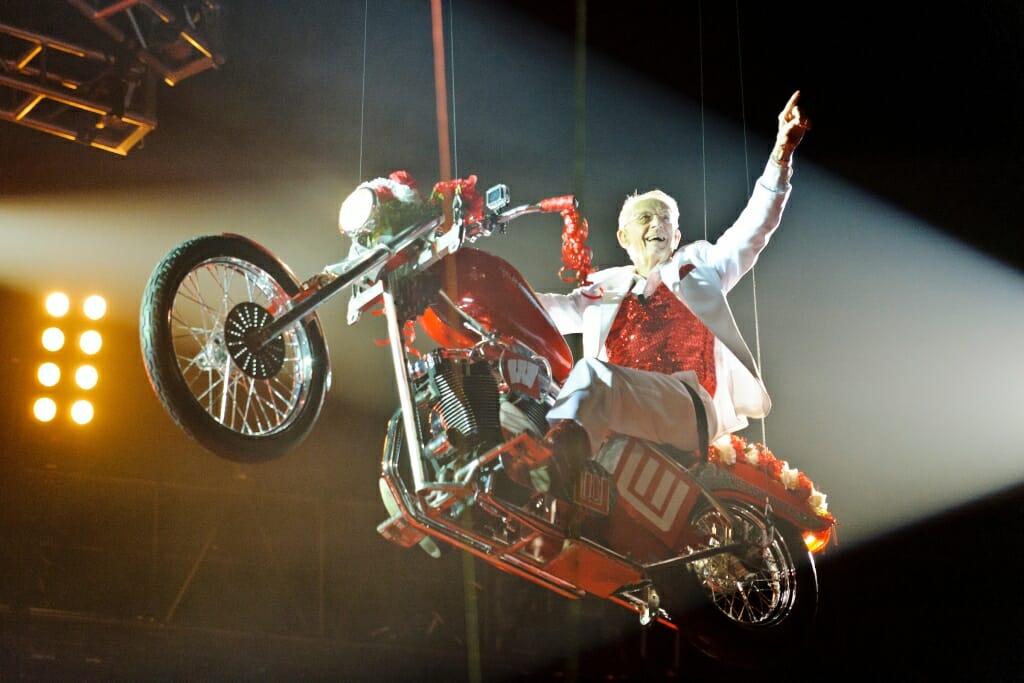 Suspended from cables, Mike Leckrone makes a flying entrance on a Harley-Davidson motorcycle at the beginning of the 39th annual UW Varsity Band Spring Concert at the Kohl Center in April 2013. Photo: Jeff Miller