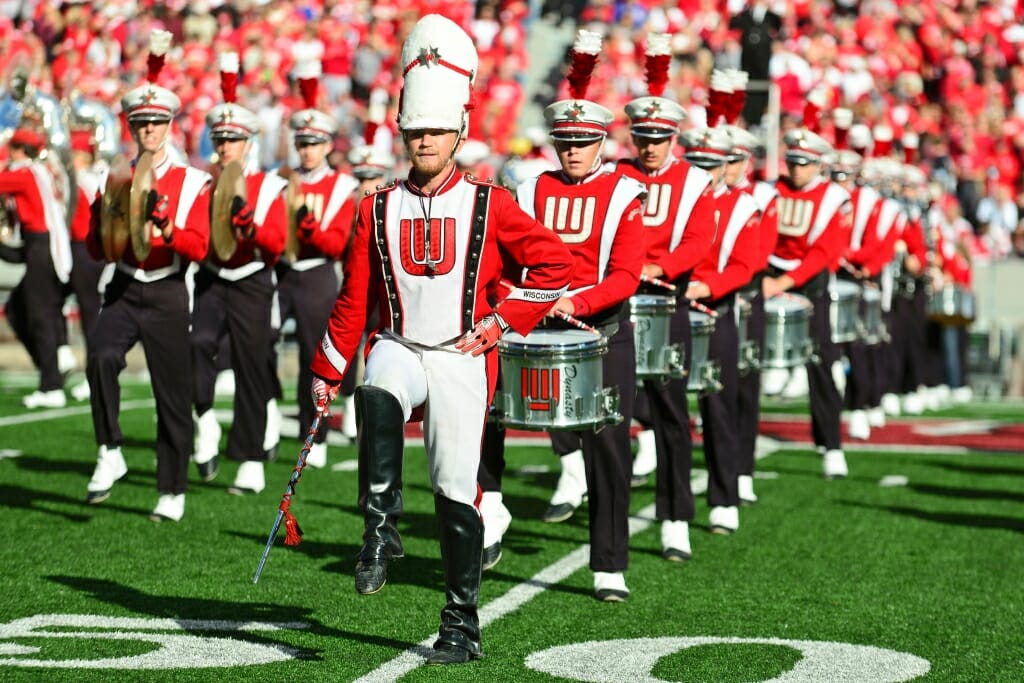 Members of the UW Marching Band perform at halftime during a game against the Purdue Boilermakers at Camp Randall Stadium on Sept. 21, 2013. Photo: Bryce Richter

For 49 of Camp Randall Stadium’s 100 years, the band marching on its field has been led by Mike Leckrone.

The Badger Band celebrates the centennial of its Camp Randall home at the annual UW Varsity Band Concert at the Kohl Center. The event, April 19-21, is a mammoth spectacle with pyrotechnics, aerial stunts and multimedia displays. Special guests include Bucky Badger and his Spirit Squad, along with surprise appearances by star athletes. 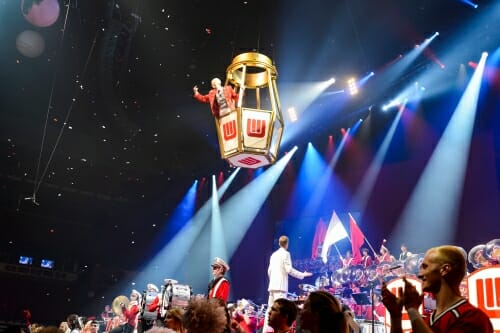 Suspended overhead in a wired basket, Mike Leckrone makes a flying entrance as the band performs toward the end of the 44th annual UW Varsity Band Spring Concert at the Kohl Center on April 20, 2017. Photo: Jeff Miller

Camp Randall Stadium was dedicated in the 1917-18 school year. Leckrone came to the University of Wisconsin in 1969. In 1975 he launched the annual spring Varsity Band Concert. All three are now beloved traditions. While it’s hard to believe, for many years after it was founded, the UW Marching Band never played at football games.

On the football field it’s the Marching Band. When not marching, in the spring semester it’s called the Varsity Band. Whatever the name, the Badger Band has come a long way. It formed in the 1885-86 school year. During its first seasons, around 15 musicians participated. Today Leckrone marches more than 300 students. 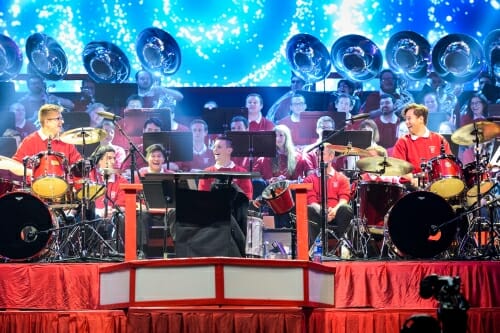 Camp Randall stadium replaced a field and wooden grandstand to the north, parallel to University Avenue. The band began performing at football games in 1894. To gather crowds back then, the musicians would often perform in open streetcars.

Over nearly half the stadium’s life, Leckrone has introduced or built on many traditions: Sousa’s “Wisconsin Forward Forever,” “You’ve Said It All” (the “Bud Song”), “On, Wisconsin!,” “Varsity,” “If You Want to Be a Badger” and the Fifth Quarter. He writes or arranges all the music, and he designed the iconic uniforms.

The climax of every band season is the riotous Varsity Band Concert, with lots of hand-clapping and audience participation. Following open-heart surgery last season, Leckrone was unable to take part in his all-time favorite activity: “flying,” and even tumbling, high over the audience — on wires.

“So another theme for this concert is ‘Mike Returns to the Air,’” he says.