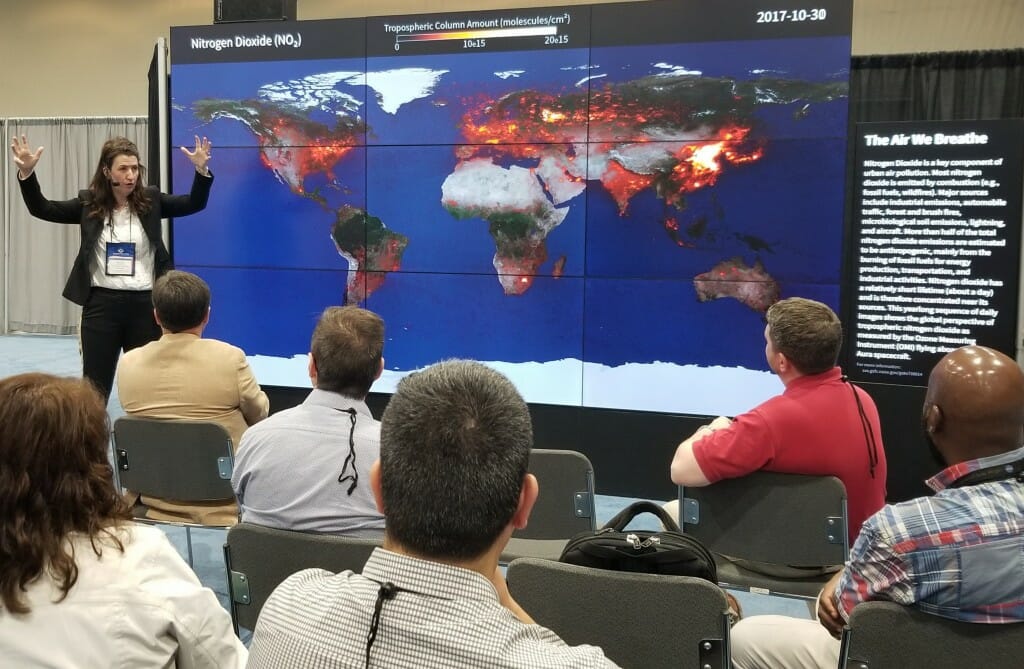 Tracey Holloway shows off the kind of satellite data — lung irritant nitrogen dioxide in the atmosphere — that HAQAST can help local health departments tap into to inform their research and policy decisions. Courtesy of Tracey Holloway

For atmospheric scientist Tracey Holloway, it’s all about connection.

Connections between research and policy, connections between air quality and health, and interpersonal connections have driven Holloway, a professor in the Nelson Institute for Environmental Studies and Department of Atmospheric and Oceanic Sciences at the University of Wisconsin–Madison, throughout her career.

The connections she makes with her team, her lab group, her department and her mentees every day drive her further towards success. Even her work as director of HAQAST, NASA’s Health and Air Quality Applied Sciences Team, is all about connecting public health and air quality agencies with satellite data to inform their work.

Growing up, Holloway never intended to study science. It wasn’t until her senior year at Brown University that she started doing research following a summer in Houston working as a NASA intern.

“When I started college as an undergrad, I had no idea that I would wind up in science. I actually thought I might go into policy or politics or law,” Holloway says. “But when I got started taking classes, I realized that I was really enjoying my math and science classes, so I ended up majoring in Applied Math.”

After that, she headed to Princeton to pursue a doctorate in atmospheric and oceanic sciences — with a certificate in public policy — and the rest is history.

“About two years into graduate school I was thinking, ‘I’m really enjoying all this science but I do miss the direct social relevance of the kind of careers that I’d been thinking of, with people and policy.’” Holloway says. “I was fortunate to get involved in a program with the Princeton public policy school. It was really that process that helped me think about bridging science, and applications and thinking, ‘How can we answer policy relevant questions with advanced scientific tools?’”

Now, Holloway splits her time between teaching, research and directing HAQAST, which started in 2011 as the Applied Science and Air Quality Team. Now in its third generation, the team, made up of 14 lab groups and over 70 researchers, used NASA satellite data to improve understanding of air quality in the U.S. and around the world.

The team works directly with organizations from individual city health departments to federal agencies like the Environmental Protection Agency. Holloway says that nearly half of the U.S. population lives in counties considered unhealthy for air pollution. Still, in many ways, air quality in the U.S. is a success story. Over the years, levels of many dangerous chemicals in the atmosphere have declined, which Holloway says bodes well for public health. But even small levels of air pollution can have significant public health impacts. 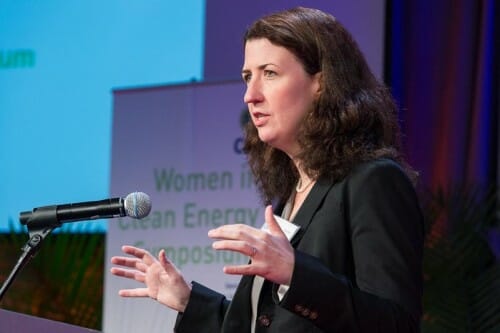 Holloway, a founding member of the Earth Science Women’s Network, champions diverse representation in her field and science in general. Courtesy of U.S. Department of Energy

The third generation HAQAST team was recently announced, funded by NASA for four more years with Holloway and an expanded team of researchers. The team members each lead a portfolio of projects, and they collaborate in smaller groups called “tiger teams” to tackle projects of priority to stakeholders around the world.

“It was so great to see that NASA wanted to fund us to do science, using these really cool data and tools, but do it in a way that helped translate the results,” Holloway says. “That, to me, was this pivot point where I don’t have to wear two different hats: my policy hat and my science hat. I can try to be the bridge to connect advanced data and science and move those questions forward, but do it in a way that keeps in mind who’s going to be using this information.”

Hundreds of organizations have joined HAQAST online or in-person meetings, collaborated on projects, or benefited from the work of the team. Holloway is excited to grow the community of organizations thinking about satellite data. For example, one of Holloway’s collaborators on her HAQAST project is the American Lung Association — not an obvious beneficiary of satellite data, but an organization with a readily apparent interest in the impact of air quality on respiratory health.

“More organizations that deal with public health are growing in their awareness of satellite data as an indicator of what people are breathing,” Holloway says. “Our team has been very effective at helping make sense of the different ways that satellite data are used for public health assessment and helping to get the word out.”

To Holloway, mentoring brings a dimension of humanity to a difficult field of study, and forging connections with her colleagues and students means providing them with a support network.

Despite her commitments to the university and HAQAST, Holloway says it’s important to her to make time for mentorship and team building. Holloway has won several awards for her work in leadership development, including MIT’s C3E Award in Education and Mentoring, a Stanford University Leopold Leadership Fellowship, a Leshner Leadership Fellowship from the American Association for the Advancement of Science and the 2018 UW–Madison Undergraduate Research Student Mentoring Award.

Because she remembers the impact her mentors had early in her career, Holloway says she’s always trying to connect with students. During her doctoral program, she grew close with her advisor, Hiram “Chip” Levy, who encouraged her throughout her career and even ended up officiating at her wedding. Holloway is working with Levy now on a textbook inspired by Introduction to Air Quality, one of her courses at UW–Madison.

To Holloway, mentoring brings a dimension of humanity to a difficult field of study, and forging connections with her colleagues and students means providing them with a support network. She works with her students so that they conduct research they’re excited about, and she keeps herself available as someone to talk through potential career paths with. Her students have gone into academia, startups, consulting and more. 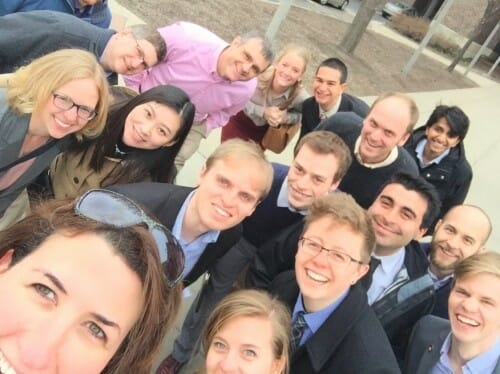 Holloway, lower left, with students and collaborators in 2017. Courtesy of Tracey Holloway

“We’re here to help launch student careers, and that, to me, is one of the most fun and rewarding parts about working at the university,” Holloway says.

Outside of Madison, Holloway is also involved in a variety of national and international organizations supporting early career scientists and women in science, including the Earth Science Women’s Network, which she helped start, and Science Moms, a program which connects mothers concerned about their children’s futures with climate science.

“I know a lot of moms are inundated with information and just trying to make the best decisions for their family. I’m a mom so it’s an audience that has been charged to care a lot about climate change, but also they’re not always sure where to turn for reliable information,” Holloway says. “That’s a new activity, but one that I think fits into mentoring and outreach, being here to advance the Wisconsin Idea and trying to be a resource, whether it’s to our students or to the public.”