As one of several initiatives to reduce its energy footprint and operate more sustainably, the University of Wisconsin–Madison Arboretum Visitor Center will get a major solar panel upgrade beginning this week.

The new Visitor Center system will include an array of 66 photovoltaic modules that are projected to produce 32,300 kilowatt-hours in the first year of operation, with a planned operational life of 30 years. The solar energy system will cover about 8 percent of the Arboretum’s current energy needs, resulting in a projected $3,750 decrease in annual electricity cost.

A data collection system and online dashboard will allow Arboretum staff and visitors to explore real-time energy production information remotely and on a display screen in the Visitor Center. 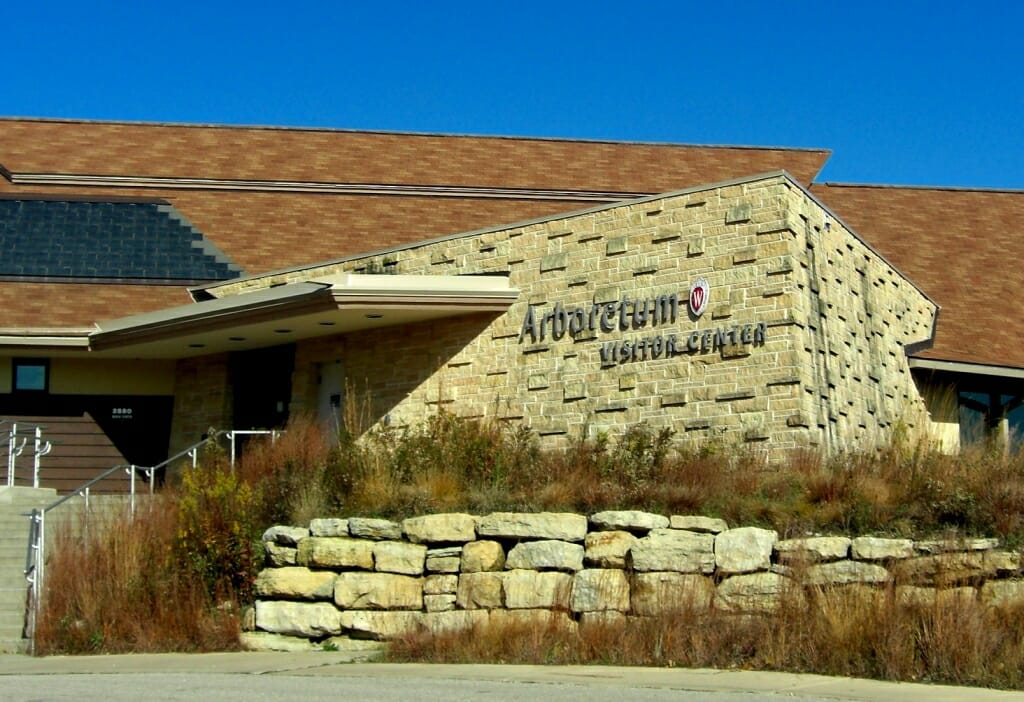 The new Visitor Center system will include an array of 66 photovoltaic modules that are projected to produce 32,300 kilowatt-hours in the first year of operation, with a planned operational life of 30 years. Courtesy of UW Arboretum

When the Arboretum built the McKay Nature Awareness Center (now the Visitor Center east wing) in 1977, it included a solar thermal collector on the roof that captured heat from the sun and stored the energy in a rock bed in a basement room, to be used to supplement building heating. While the system represented leading technology at the time, it had long since become ineffective and was removed in 2019. A solar photovoltaic tile system, which began operating on Earth Day 2001, remains on the west wing of the Visitor Center.

The solar installation has benefited from the support of many project partners. SunPeak, a Madison-based solar photovoltaic developer, is installing the new system. A $25,000 donation from Friends of the Arboretum, a nonprofit support organization, allowed the Arboretum to initiate project planning and is helping pay labor and installation costs. Solar for Good, an initiative of RENEW Wisconsin, has provided the solar panels at no cost to the Arboretum. At the completion of the project, the Arboretum will apply for a rebate from Focus on Energy, a program that offers incentives for energy efficiency and renewable energy.

The Green Fund, a UW–Madison Office of Sustainability program, contributed $20,000 and has been a key collaborator in the planning process. The Green Fund engages students in projects that improve the sustainability of campus facilities. Undergraduates from the student organizations HELIOS and Sierra Student Coalition have been involved in every stage of the process: reviewing project specifications, calculating the impacts of the upgrades, meeting with project partners, writing grant proposals, and crafting communications to reach campus and community audiences.

In tandem with the solar installation, the Arboretum is working with the Green Fund on another sustainability initiative: upgrading the Visitor Center to energy-efficient LED lighting. In a 2018 energy use assessment, Madison Gas and Electric identified the potential to conserve energy by updating lighting systems throughout the building. The Green Fund students applied for additional funding, and $30,000 will be contributed toward the retrofit process.

The solar electricity produced on the roof will cover a higher proportion of the building’s total energy needs after the lighting is upgraded and Visitor Center energy use decreases. Existing infrastructure upgrades, as well as staff education and engagement, will also contribute to lower energy use. Several air conditioning units were replaced with higher efficiency units in summer 2019.

Over several years, Arboretum staff have pursued Green Office Certification through the Office of Sustainability. For this certification process, student employees from the Office of Sustainability assessed office operations and provided practical recommendations for improvements in waste and recycling, energy and water savings, and sustainable purchasing. Staff implemented changes throughout offices and common spaces for a greener workplace and achieved the Gold and then Platinum levels.

As an environmental research center, the Arboretum is dedicated to decreasing its institutional carbon footprint, serving as an example of sustainable energy production and use, and informing the public about these efforts.