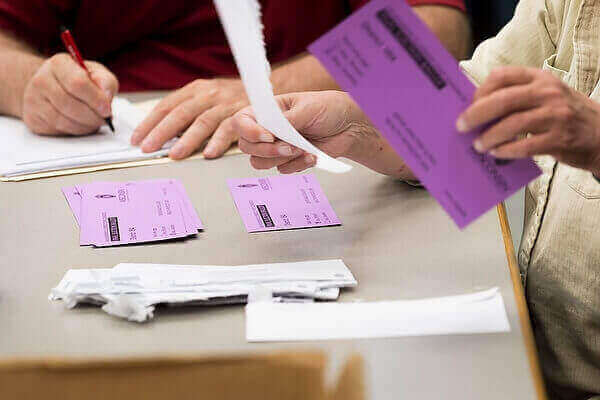 Ballots being counted in July 2014 in the first election for what was then known as the Classified Staff Congress and is now the University Staff Congress. Photo: Jeff Miller

The process of conducting the third congressional election for University Staff has begun. The University Staff Congress consists of 106 seats, with each seat representing 35 to 75 employees of similar job type. Those elected serve one-year terms and attend monthly meetings chaired by the vice chancellor for finance and administration.

“University Staff is often engaged in campus tasks that may not involve a lot of interaction with the key decision makers,” says John Lease, secretary of the University Staff. “Congress meetings allow for that direct give and take and candid conversation been the staff and the administration.”

Those seeking a seat in the Congress must file or postmark their applications no later than April 9. Ballots will be mailed to the homes of employees starting May 2 and new members of the Congress will be invited to an orientation on July 18.

“Last year, about half of the incumbents ran for a second term, and I have noticed that some people who didn’t get elected last time are giving it another try this year,” says Congressional Liaison Jake Rebholz, a computer print technician working in Systems Engineering and Operations. “I think this will create a productive mix of some veterans along with some new voices that we have not heard from before.”

Lease noted that in the past, several English language learners have been members of Congress and some have filed to run as candidates again this year. The campus office of Cultural Linguistic Services provides interpretation for members of Congress who participate in meetings using their native language.

One new element to the campaign to recruit candidates this year is a video posted to the University Staff shared governance website featuring Linda Thao, who works as a program assistant confidential in the office of the Secretary of the University Staff.

“We wanted to make the election process accessible and friendly,” Thao says. “We wanted to take the mystery out of running for a shared governance office because in reality it is a very easy thing to do, and hopefully the video accomplishes that.”

More information about the election can be found at the University Staff shared governance website.