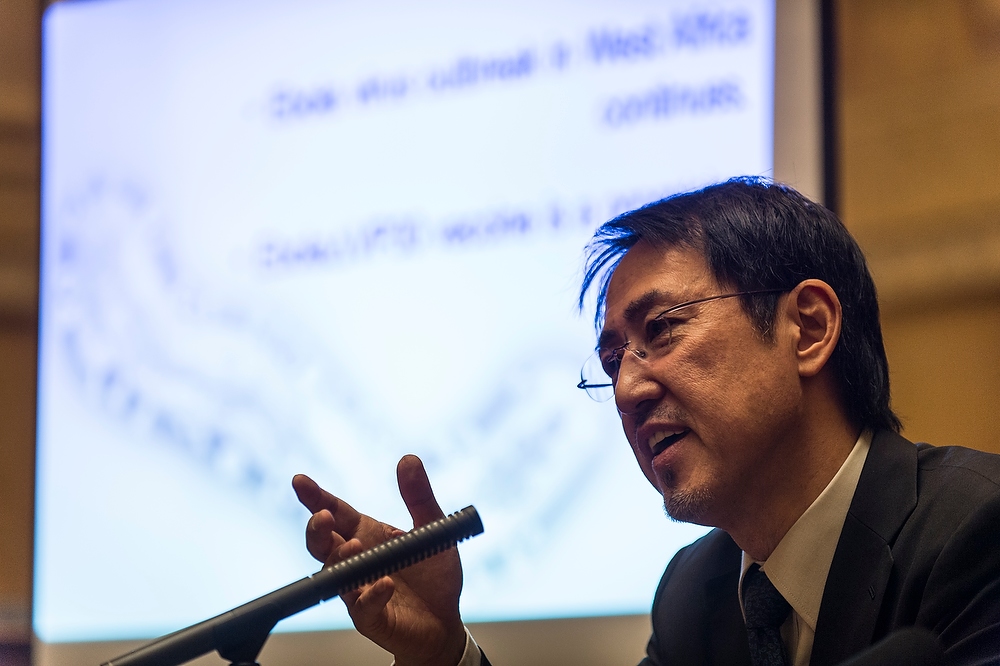 Yoshihiro Kawaoka, professor of pathobiological sciences at the University of Wisconsin–Madison School of Veterinary Medicine (SVM), has been selected for the 2015 Carlos J. Finlay UNESCO Prize for Microbiology.

According to UNESCO — the United Nations Educational, Scientific and Cultural Organization — Kawaoka, a prominent influenza and Ebola researcher, was selected for his overall contributions to the field of microbiology.

In particular, Kawaoka developed technology in 2005 that vastly improved flu vaccine production. In addition, his work has led to a better understanding of flu viruses and Ebola.

Kawaoka was recommended by a five-member jury of independent virologists and microbiologists from Ivory Coast, France, Egypt, Cuba and Sri Lanka, and was ultimately selected by UNESCO Director-General Irina Bokova. He was chosen from among nominations from 30 countries.

“I am honored to have been selected to receive this prize,” says Kawaoka, who also holds an appointment at the University of Tokyo.

The Finlay Prize was established by UNESCO in 1977 to honor scientists who make significant contributions to microbiology. This is the first time in 10 years it has been awarded, though generally it is given every odd-numbered year, sponsored by the government of Cuba.

Kawaoka’s goal is to help global health agencies identify these influenza viruses before they arise, to help improve vaccine stockpiling efforts, and to ultimately develop a universal flu vaccine.

Carlos Finlay was a Cuban-born scientist of European descent who pioneered the study of yellow fever in the late 1800s. In 1881, he discovered that mosquitoes carry and transmit the virus that causes the disease.

At the time, Finlay was ridiculed for his idea. It was not until 1900, when the U.S. Army Yellow Fever Board visited the scientist in Cuba and used his mosquitoes to conduct a series of experiments — confirming his conclusions — that Finlay’s findings were accepted. Finlay went on to become chief sanitary officer of Cuba until he retired in 1909. He died in 1915.

Like Finlay’s research, Kawaoka’s research has sometimes been considered controversial. In addition to his work in vaccine development, Kawaoka studies influenza viruses for their ability to cause a pandemic. His goal is to help global health agencies identify these influenza viruses before they arise, to help improve vaccine stockpiling efforts, and to ultimately develop a universal flu vaccine.

“Professor Kawaoka’s designation as the laureate of the 2015 Carlos J. Finlay UNESCO Prize for Microbiology highlights the importance of his work in preventing future pandemics affecting the globe,” says Mark Markel, dean and Vilas Distinguished Achievement Professor at the veterinary school. “He and many of the faculty at the UW School of Veterinary Medicine are dedicated to understanding, preventing and treating emerging infectious diseases that may affect millions of people.”

Currently, some of Kawaoka’s most prominent research — involving viruses that may be more easily transmissible between hosts — is on hold as the United States grapples with how to best address the continued safe and ethical conduct of such gain-of-function studies.

The Academy of Sciences of Cuba in Havana will host a ceremony on Dec. 21. The Japanese ambassador will accept the $10,000 award on Kawaoka’s behalf.