Understanding ceramic ‘mortar’ of materials may reveal ways to improve them

When most people think of ceramics, they might envision their favorite mug or a flowerpot. But modern technology is full of advanced ceramics, from silicon solar panels to ceramic superconductors and biomedical implants.

Many of those advanced polycrystalline ceramics are combinations of crystalline grains which, at the microscopic level, resemble a stone fence held together with limestone mortar. Like that fence, the strength of the ceramic is determined by the strength of the mortar — which in ceramics is the grain boundary, or the areas where the different grains meet.

Previously, most researchers believed the chemistry of these grain boundaries in ceramics was very stable. But a new study by materials science engineers at the University of Wisconsin–Madison shows that’s not the case. In fact, in the important ceramic material silicon carbide, carbon atoms collect at those grain boundaries when the material is exposed to radiation. The finding could help engineers better understand the properties of ceramics and could aid in fine-tuning a new generation of ceramic materials.

The details of the study appear today in the journal Nature Materials. 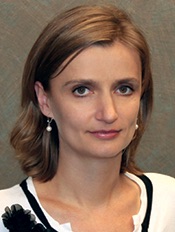 Since the 1970s, researchers have been aware of similar radiation-induced segregation in metal alloys. Because metal atoms share electrons freely, they are able to mix and unmix easily. When they are bombarded by ion radiation, some of the atoms in the metals will pop out of place and move toward the grain boundaries, and if different types of atoms move at different rates, the chemistry of the alloy can be altered.

Atoms in ceramics are very selective about which neighbors they bond with and the bonds are much stronger than in metals. That’s why researchers believed these atoms weren’t subject to the same type of segregation. But when Izabela Szlufarska, a professor of materials science and engineering at UW–Madison, began looking closely at the grain boundaries of silicon carbide, that’s not what she found.

However, when her team ran simulations and also imaged the grain boundaries, the carbon concentration was only 45 percent at the boundaries. “The chemistry was just really off,” she says. “That was the first surprise, since this material really wants to have ordered atoms.”

This suggested that silicon carbide might also be susceptible to radiation-induced segregation. So Szlufarska and her team bombarded the substance with ion radiation, finding that between 300 degrees Celsius and 600 degrees Celsius, the grain boundaries experienced carbon enrichment.

At those energy levels, the radiation causes some carbon atoms to pop out of place, creating a pair of defects in the silicon carbide including an empty spot called a vacancy and a loose carbon atom called an interstitial. Those unattached interstitial atoms migrate to the grain boundaries where they accumulate, affecting the material’s chemistry. 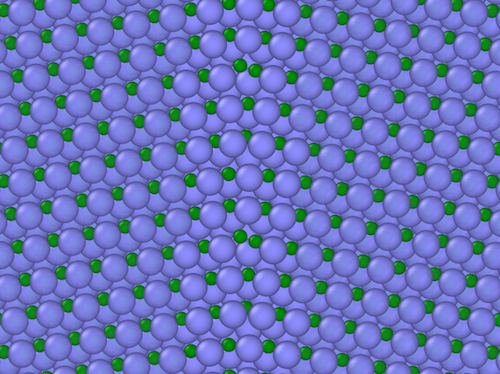 Silicon carbide before irradiation. “In silicon carbide, the silicon and carbon really want to be paired together,” says Szlufarska. But when she began looking closely, that’s not what she found. 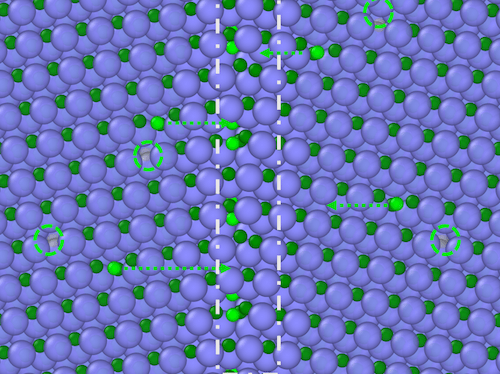 Silicon carbide after irradiation, in which loose carbon atoms (green) move toward the boundary (dashed line) between grains of the crystalline ceramic. Images courtesy of Hongliang Zhang

Besides the fact that researchers simply didn’t believe this type of segregation could take place in ceramics, Szlufarska says that, until recently, they also lacked the tools to even investigate the phenomenon. After painstaking fabrication and preparation of the silicon carbide bi-crystals, state-of-the-art scanning transmission electron microscopy conducted at UW–Madison and Oak Ridge National Laboratory allowed the team to resolve the chemical composition along the grain boundaries.

The team believes the phenomenon is likely to occur in other polycrystalline ceramics as well. The process is a double-edged sword: On the one hand, radiation-induced segregation means ceramics are subject to the same types of damage and deterioration at their grain boundaries as metal alloys, though at different temperatures. On the other hand, the segregation could be useful in materials engineering to produce specialized versions of ceramics like silicon carbide, which is used in nuclear energy, jet engines and other high-tech applications.

“Maybe the radiation can be used as a tool to fine-tune grain boundary chemistry,” says Xing Wang, study co-author and a professor at Penn State University who worked on the research while earning his doctorate at UW–Madison. “That could be useful to us in the future.”