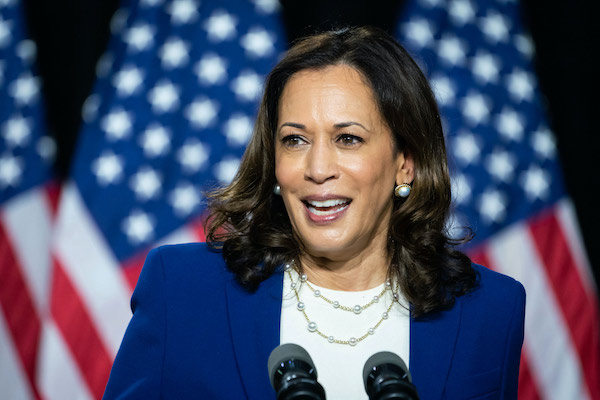 “Little-known fact: I lived in Madison,” Kamala Harris said in 2018. “My parents taught at the University of Wisconsin–Madison for a brief moment in time and I was 5 years old and lived in Madison, Wisconsin.” whitehouse.gov

Kamala Harris and Dick Cheney don’t have much in common, as they’re on different sides of the political spectrum.

Except one thing: The new vice president and the former vice president both lived in Madison at around the same time in the late 1960s, each with a close connection to the University of Wisconsin–Madison.

The story of Dick Cheney, who was vice president to George W. Bush, is already well- known. He attended the university as a doctoral student in political science from 1966 until he left in 1968 for a congressional fellowship in Washington, D.C. He did not complete his degree. Cheney’s wife, Lynne, attended classes as a graduate student from 1966 to 1968 and earned a Ph.D. in English in 1970. In fact, their daughter Liz Cheney, now a U.S. representative from Wyoming, was born in Madison in 1966.

But the story of the Harrises’ time in Madison is a new one, although it became better known last year as she campaigned in Wisconsin as Joe Biden’s running mate. 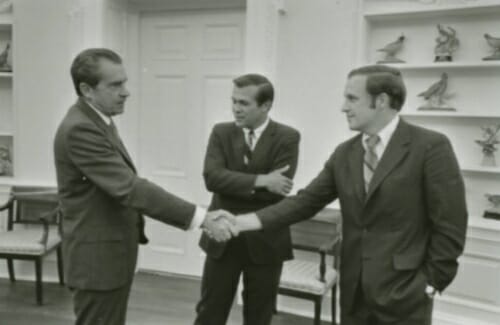 Richard Nixon, Donald Rumsfeld and Dick Cheney in 1970. Cheney attended UW–Madison from 1966 to 1968, when he went to Washington, D.C., on a fellowship. Nixon Presidential Library

“Wisconsin has a special place in my heart,” Kamala Harris wrote in a Wisconsin State Journal op-ed. “It was a brief moment — but for a little while, we called Wisconsin home.”

As a five-year-old, Harris wasn’t quite a political mover and shaker – yet. But she was in training with her parents serving as examples of what passion and activism can do.

In her autobiography, “The Truths We Hold,” Harris recalls that her parents were “big thinkers, pushing big ideas, organizing their community.” In fact, that was what brought them together.

Shyamala Gopalan was the child of a women’s rights advocate and a prominent civil servant from the Indian state of Tamil Nadu. After graduating from India’s University of Delhi when she was 19, Gopalan came to the University of California-Berkeley to pursue doctoral studies in nutrition and endocrinology.

Donald Harris was born in Jamaica and came to Berkeley to get his doctorate in economics after graduating from Jamaica’s University College of the West Indies.

They met after joining a group of students who met on Sundays to talk about Black writers who were overlooked by the school’s curriculum and to debate about politics, decolonization, and activism.

Harris said that her parents “fell in love in that most American way—while marching together for justice in the civil rights movement of the 1960s.”

Growing up in Oakland, Harris says she had “a stroller-eye view of the Civil Rights movement.”

Her mother planned to return to India.

The family, which by that time included Kamala and her sister Maya, moved to Madison when Donald Harris accepted a job in 1968 as an associate professor in economics and Shyamala as a breast cancer researcher at UW–Madison.

Harris worked in the lab of Gerry Mueller, a professor in the McArdle Laboratory for Cancer Research, studying hormonal interactions relative to breast cancer, in 1968 and 1969, according to UW records.

In 1969, Donald Harris was one of 14 Black faculty and staff who publicly supported Black students who presented 13 demands to UW–Madison administration. Her father was also part of an advisory committee for the UW’s Afro-American Center in 1970.

In May 1970, Harris was one of 242 faculty members to stop teaching classes because of U.S. entry into Cambodia.

“The present situation on other campuses as well as the present turmoil on our own makes it impossible for us to continue teaching in our classrooms,” a statement said.

Her parents later divorced, with her mother returning to Berkeley with Kamala and her sister Maya, and Donald Harris leaving UW–Madison in 1972 for Stanford University.

“They didn’t fight about money,” Kamala Harris recalled. “The only thing they fought about was who got the books.”

Donald Harris taught at Stanford University from 1972 until 1998, when he took early retirement. He used his time to work on “developing public policies to promote economic growth and advance social equity.”

Her mother died Feb. 11, 2009 of cancer. While the archives don’t reveal much about her time as a researcher at UW–Madison, her obituary says “her talent as a breast cancer researcher took her to universities around the world, from the University of Illinois and University of Wisconsin, to France, Italy, and a 16-year tenure at the Lady Davis Institute for Medical Research at the Jewish General Hospital and the Department of Medicine at McGill Univ. in Montreal. She made substantial contributions to the field of hormones and breast cancer, publishing her research in countless journals and receiving numerous honors.”

“I’m the daughter of a mother who broke down all kinds of barriers,” Kamala wrote on Instagram in May. “Shyamala Harris was no more than five feet tall, but if you ever met her you would think she was seven feet tall. She had such spirit and tenacity and I’m thankful every day to have been raised by her.”

Yes, Kamala Harris’ time in Madison was brief but it was part of her road to the White House. That “stroller-eye view” of watching her parents fight for what they believed in helped set her up to make history with Wisconsin being a small footnote.

“I was raised by a mother who said to me all the time, ‘Kamala, you may be the first to do many things—make sure you’re not the last,’” she said after the election. “That’s how I feel about this moment.”