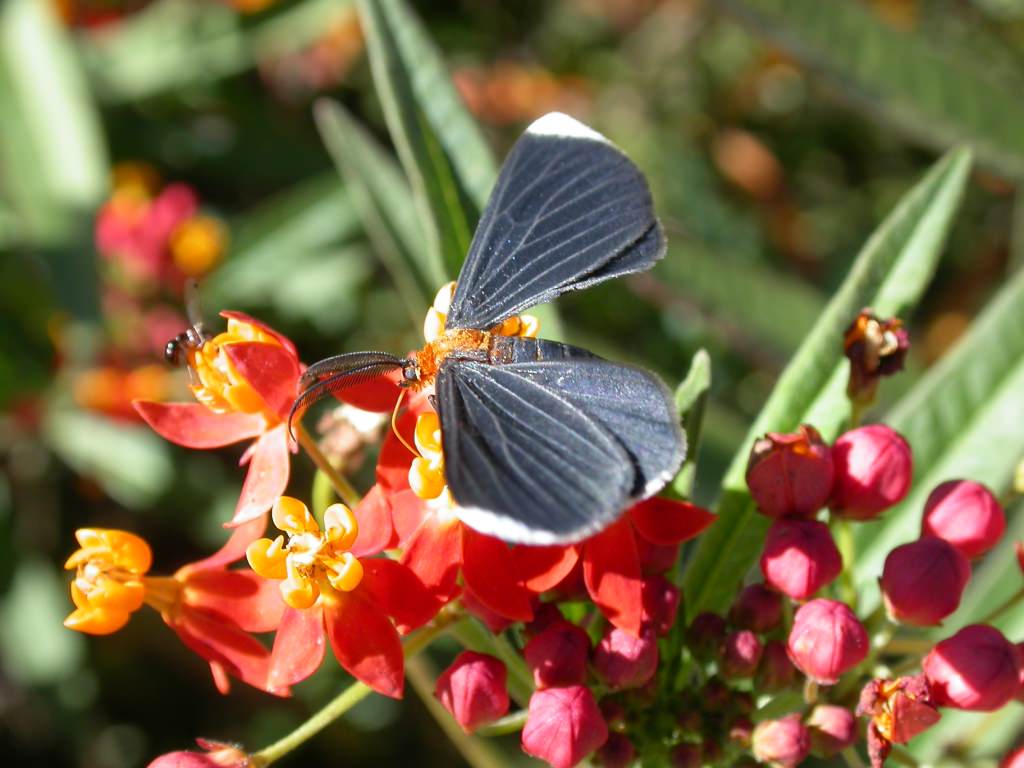 A tropical white-tipped black moth, a species whose northernmost range is typically Florida and the Gulf Coast of Texas, was photographed in the UW–Madison Botany Garden on Oct. 18. The moth was recorded for the first time in Wisconsin and its visit to the state is possibly the northernmost sighting for the moth. Edgar Spalding/UW-Madison

Just down Bascom Hill from Spalding’s lab, squeezed between Birge Hall and University Avenue, is UW–Madison’s renowned Botanical Garden, a flower-filled teaching and research space where the Wisconsin botanist breaks from the routine of academic research and teaching to engage in his pastime of observing “pretty things with wings.”

On a sojourn to the garden last month, Spalding saw and photographed “a handsome moth” he suspected was rare. What he did not know then was that his sighting was the first recorded observation in Wisconsin of the white-tipped black moth, a tropical species whose natural range typically does not extend much farther north than Florida and the Texas coast.

“As far as I can tell, this is the farthest north the moth has been sighted, and the first one ever in Wisconsin,” says Spalding, of the creature also known as the snowbush spanworm. “I guess I knew enough to know that this guy is not supposed to be here.”

Spalding’s observation was validated by Les Ferge, a former biological technician at the USDA’s Forest Products Laboratory in Madison. Ferge is considered a leading authority on moths in Wisconsin. The sighting was further confirmed by UW–Madison entomologist P.J. Liesch.

“After consulting the Wisconsin Insect Research Collection and chatting with colleagues, this does appear to be the first ever recorded sighting of this species in Wisconsin,” notes Liesch. “With the unusually warm weather, it is likely the moth had been carried up from more southern locations by air currents. It’s well known that air currents, the jet stream, storm fronts, etc., can send some weird things our way on occasion.”

“As far as I can tell, this is the farthest north the moth has been sighted, and the first one ever in Wisconsin,”

Ferge was skeptical of Spalding’s find at first and inquired if anything tropical had been recently transplanted in the garden. But garden Director Mohammad Fayyaz checked the garden records and noted that planting tropical species in Wisconsin in October is, at best, a losing proposition.

“It is always possible that could occur,” explains Ferge, “but in view of careful checking by the Botany Department of their living plant material, it seems quite unlikely.”

This year, there have been sightings of the white-tipped black moth in Oklahoma, where it made news for being that far north of its host range, and also in Illinois.

None of the experts could or would attribute the tropical moth’s visit to Wisconsin to climate change, but Spalding did reference the unseasonal temperatures the state has experienced this year.

“If we had a regular October with frost, it wouldn’t be here,” he says.

The white-tipped black moth is, “by far,” the most uncommon species encountered by Spalding, who keeps a camera close at hand to – if he is fast enough – document the winged creatures he observes.

The sighting, which Spalding first publicized on the UW–Madison Botany Department’s Facebook Page, also has given the plant scientist notoriety beyond his expertise of how seeds grow and develop into the plants familiar to humans and moths. “The post went through the roof. It finally dawned on me that something about this story resonates with people.”