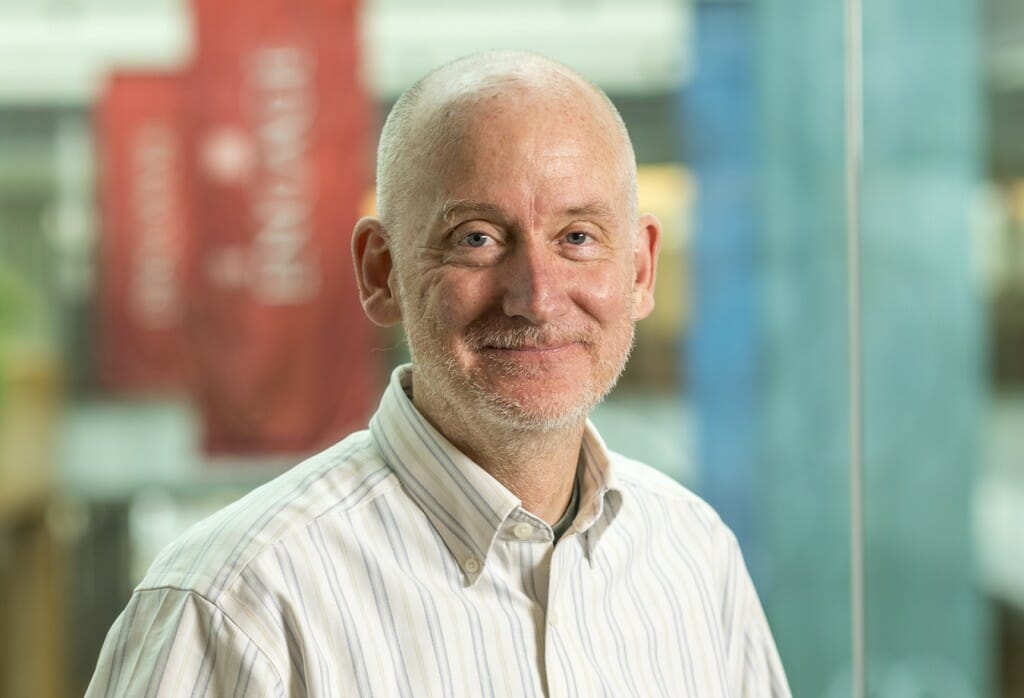 The developing human body will eventually grow from a tiny two-celled zygote to a massively complex system comprising more than 37 trillion cells. If a single cell represented one second in time, all of our cells combined would span 1.8 million years.

James Thomson helped the scientific world turn its attention to the shape-shifting stem cells that give rise to all of the building blocks of complex living organisms, from skin and bone, to hearts and blood, to neurons and brains.

After more than 30 years with the University of Wisconsin–Madison and 15 years with the Morgridge Institute for Research, Thomson has announced plans to retire in July 2022.

“There are few scientists in the world, across all of history, with the ability to translate their deep curiosity about life into discoveries that fundamentally change what’s possible for humanity,” says UW–Madison Chancellor Rebecca Blank. “We are all fortunate that Jamie Thomson dedicated his own life and career to such pursuits, and we are especially grateful he did so at UW–Madison. His work has influenced generations of our students and scholars.”

Thomson will always be best known, as the cover of TIME Magazine trumpeted in summer 2001, as “the man who brought you stem cells.” His life’s work contains three quantum leaps in regenerative biology.

The first was in 1995, when he derived stem cells from nonhuman primates, the first time ever done in a species closely related to people. Then in 1998, he isolated five stem cell lines from human embryos, work that enabled stem cell discovery in thousands of labs around the world and spawned a prolonged, high-stakes bioethical debate in the U.S.

The third leap was in 2007, with the discovery of adult pluripotent stem cells, which offered a way of coaxing adult skin cells back to an original blank state.

Stem cell science now employs tens of thousands of scientists globally in industry and academia. Many are working in promising frontiers such as stopping or reversing blindness, and treating or preventing Parkinson’s disease and diabetes.

Stem cells have become ubiquitous tools in the world of drug development and testing. They sparked Proposition 71, a California referendum in 2004 that led to the investment of $5.5 billion in state funds to support stem cell-based medical advances.

And they’ve opened up wide basic science frontiers, permitting researchers around the globe to explore vast new questions about how biology works. The Wisconsin Alumni Research Foundation (WARF), a vital long-term supporter of Thomson’s research, created the organization WiCell in 1999 to enable distribution of Thomson’s original stem cell lines to scientists across the world. Today, WiCell’s repository holds more than 1500 stem cell lines, and more than 7300 distributions have been made to more than 2300 laboratories at 956 institutions across 43 countries.

Thomson began his postdoctoral career in primate research in the early 1990s with an initial focus on species preservation. “At that time, about half of the 200 or so species of primates were threatened or endangered,” he says. “And by the time my children are older, a lot of them would likely be extinct. I was interested in using reproductive technologies to at least maintain the germ plasm if not maintain this species in the wild.”

Thomson’s attention at the Wisconsin National Primate Research Center soon switched permanently to stem cells once that science started showing progress. Prior to that time, stem cells were only successfully isolated in rodents.

“I wasn’t really thinking that I’d be the one to drive the human cells,” he explains. “I figured that we would get the monkey advance and somebody else would drive it to humans. But for whatever reason, time was on our side.”

The 1998 embryonic stem cell discovery would dominate headlines for years, both because of the cells’ immense biomedical promise and the controversy surrounding their origins. The debate became closely entwined with the abortion debate and the question of when human life begins.

The controversy came to a head in summer 2001 when the George W. Bush administration, after months of intense lobbying on both sides of the issue, ultimately allowed research to continue using only the five cell lines derived in the Thomson lab. Those lines are still used today in labs around the world.

Tommy Thompson, who as governor of Wisconsin in 1998 cheered Thomson’s discovery, became a pivotal voice in the national debate when he was selected as Bush’s secretary of health and human services in 2001. His support of stem cell science proved to be a deciding factor for Bush. Republican Senator Orrin Hatch of Utah also became a surprising advocate.

“I knew the controversy was going to be awful, but I figured in three to six months it would be gone,” says Thompson, who recently retired as interim president of the University of Wisconsin System. “But once the Bush administration made it a top priority, the controversy lasted for 10 years rather than six months. That really surprised me.”

An intensely private person who doesn’t seek the limelight, Thomson nonetheless took part in dozens of speaking engagements in those early years to help educate decision-makers on stem cell science. Thomson recalls a 2001 meeting in Hollywood, where he spoke with a group of movie industry heavyweights, including David and Jerry Zucker and actor Robert Klein. All of them had family connections to a disease that could be helped by stem cell research.

In hindsight, Thomson says the excitement over potential stem cell therapies and disease cures led people to unrealistic expectations. “The timeline for human therapies was always wrong. It was never going to happen in 10 years.”

That fact is playing out today. Now 23 years removed from the original finding, many clinical trials are showing promising results. A fall 2020 paper in the journal Nature estimates there are more than 130 current clinical trials involving pluripotent stem cells, which are defined by their capacity for indefinite self-renewal and ability to differentiate into any cell in the body.

Some of the recent advances may have enormous potential to reduce human suffering.

Doug Melton, a professor of developmental biology at Harvard University, has successfully developed an insulin-producing pancreatic cell line that could cure diabetes. It is being developed by a pharmaceutical company and appears to have fully cured its first patient, according to a November 2021 story in The New York Times.

On another front, Lorenz Studer, director of Memorial Sloan Kettering’s Center for Stem Cell Biology, has embarked on the first-ever human clinical trial using pluripotent stem cells to treat Parkinson’s disease. The treatment is being developed by BlueRock Therapeutics of Cambridge.

Other promising research has close connections to the Thomson Lab. Dennis Clegg, a stem cell scientist at the University of California, Santa Barbara, where Thomson holds a faculty position, is using cells from one of Thomson’s original 1998 stem cell lines to treat macular degeneration.

Phase one of the clinical trial is complete and, surprisingly, one-third of the patients with advanced macular degeneration showed noticeable improvement in their vision. This was a control group that clinicians thought would not get direct benefit.

“Two years ago, I met one of the women who had the transplant,” Thomson says. “And she was saying how isolating macular degeneration is because you lose the center part of your vision. You can’t go to a party and recognize people and talk to them, because your brain can’t process it. And she went from that condition to being able to read and actually recognize people again.”

Thomson’s own lab at the Morgridge Institute has been singularly focused on a project that could greatly improve health prospects of people with cardiovascular disease, which accounts for one in every four deaths annually in the United States.

Now in its 10th year, the project is developing functional stem cell-derived arteries for use in vascular surgery. The lab has developed scaffolds from synthetic materials that give form and shape to the artery. They then use a bioreactor that enables endothelial and smooth muscle cells to grow naturally around the scaffolding.

The need for alternatives is great. People with advanced cardiovascular disease often have blockage in the main arteries in their legs, a debilitating condition that can lead to amputation or death. The ultimate goal would be to provide clinicians with a “bank” of arteries that could be used for all kinds of peripheral artery disease treatment.

The project is in the final two years of a seven-year grant from the National Institutes of Health. Igor Slukvin, a professor of pathology and laboratory medicine who is leading the clinical trials, will be the lead investigator of the artery project after Thomson retires.

Institutional support made the science possible

“This is a university with a medical school, a veterinary school, a primate center, the Morgridge Institute, and the Waisman Center cell manufacturing facility,” he says. “Nobody else has that combination of resources. So, we can go from really basic science to actually making a clinical product without leaving campus.”

Thomson’s work also led to a highly successful spinoff company at University Research Park. Cellular Dynamics International, formed in 2007, was purchased in 2015 by FujiFilm for $307 million. Still based in Madison and employing nearly 300 people, the company manufactures cell lines derived from pluripotent stem cells for myriad applications across scientific research and health care.

“Jamie Thomson’s accomplishments represent why it’s so critical for UW–Madison to provide resources and help foster the kinds of institutional and industry connections that permit basic scientific discoveries,” says Vice Chancellor for Research and Graduate Education Steve Ackerman. “Investing in ideas and in people pays off in ways that may be impossible to predict at the outset.”

Thomson’s discoveries led to two “Breakthrough of the Year” honors from the journal Science, in 1998 and 2007; a cover story in Time Magazine, which named him one of the “World’s 100 Most Influential People” in 2008; and receipt in 2011 of the Albany Medical Center Prize in Medicine and Biomedical Research, known as “America’s Nobel.”

Before retiring, Thomson is planning to give a valedictory talk to the university community. He says he’s still developing the topic.

“My preference would be to just go ‘whoosh’ through this puff of smoke,” Thomson jokes. “But of course, I am very grateful for what the university and the Morgridge Institute have done for my research, so I want to give back on my way out.”