Rita Argus recalls hearing her professors at the University of Wisconsin–Madison talk about the Wisconsin Idea, “the thought that what we are learning in the classroom should be applicable to real-world situations.”

“I think this has conditioned me to better apply what I learned to help with problems and challenges I am encountering here,” says Argus, who graduated from UW–Madison in May 2014 with a degree in biological systems engineering. 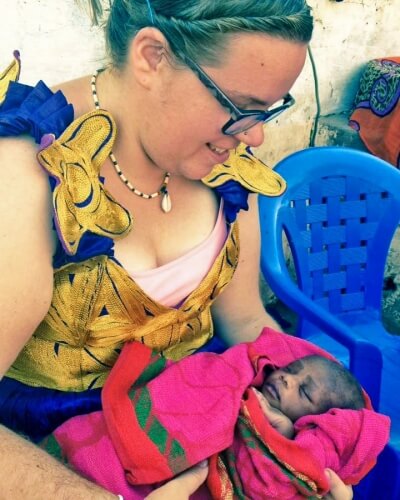 Rita Argus, 24, of Helenville, Wisconsin, is one of 68 UW–Madison alumni currently in the field as Peace Corps Volunteers. Photo courtesy of the Peace Corps

When she speaks of “here,” Argus is referring to Senegal in West Africa, where she has been working with a Senegalese master farmer to train local farmers in sustainable agriculture and agroforestry practices. She also is helping a local agricultural research group distribute seeds and gather information to help improve seed variety throughout the country.

Argus, 24, of Helenville, Wisconsin, is one of 68 UW–Madison alumni currently in the field as Peace Corps Volunteers.

For the second year in a row, UW–Madison is the second-largest producer of Peace Corps Volunteers, according to the agency’s 2016 list of Top Volunteer-Producing Colleges and Universities, released February 18.

UW–Madison has been a leading source for Peace Corps Volunteers throughout the agency’s history:

“The Peace Corps is a unique opportunity for college graduates to put their education into practice and become agents of change in communities around the world,” says Peace Corps Director Carrie Hessler-Radelet. “Today’s graduates understand the importance of intercultural understanding and are raising their hands in record numbers to take on the challenge of international service.”

At UW–Madison, the International Division hosts the on-campus Peace Corps recruiter, who provides information and shares personal experiences as a volunteer. The current campus recruiter, Micah Kloppenburg, is a UW–Madison graduate student who served with the Peace Corps in Nicaragua from 2009 to 2011. 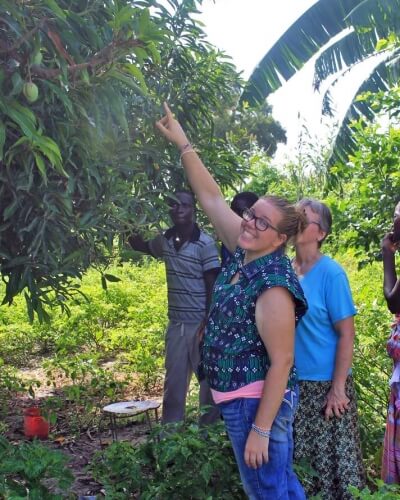 Argus has been working with a Senegalese master farmer to train local farmers in sustainable agriculture and agroforestry practices. Photo courtesy of the Peace Corps

“UW–Madison has a proud tradition of using our knowledge and expertise to help make the world a better place,” says Guido Podestá, vice provost and dean of the International Division. “Our Peace Corps ranking reflects this tradition, as well as the great work of our former campus Peace Corps recruiter, Eric Luckey, who worked with many of the current Badgers in the field, and his successor, Micah Kloppenburg.”

In addition, Podestá says, “Members of the Returned Peace Corps Volunteers of Wisconsin–Madison have boosted our recruiting efforts by collaborating on networking events and sharing their stories with prospective volunteers.”

“Serving in the Peace Corps has been a goal of mine for a long time, so long that I don’t even remember when the seed of inspiration was planted,” Argus says. “I like using my talents to make the world a little bit better — and Peace Corps is an awesome opportunity to do just that.”

As a student, she had international experiences through Engineers Without Borders and participated in an aquaponics internship in Kerala, India, in 2012 through the International Internship Program.

“Through UW–Madison and various student organizations that the university supports, I had the opportunity to travel internationally a lot for a variety of projects. These opportunities gave me a little bit of a taste of what life would be like as a volunteer,” Argus says.

Since 1961, when the Peace Corps was created, 3,184 UW–Madison alumni have served overseas, making the campus the No. 2 all-time producer of Peace Corps volunteers.

In total, 149 graduates of the University of Wisconsin System’s 13 four-year campuses are currently serving as Peace Corps volunteers. This includes 16 from UW–Stevens Point and 14 from UW–La Crosse, which rank 14th and 20th, respectively, among medium-sized institutions.

Nationally, the University of Washington in Seattle has the highest number of volunteers, with 72 graduates currently serving.

Applications for the Peace Corps hit a 40-year high in 2015, the first full year after the agency implemented reforms that allow candidates to apply for specific countries and assignments.

I like using my talents to make the world a little bit better — and Peace Corps is an awesome opportunity to do just that.

Graduating college students are encouraged to browse open programs and apply by April 1 for assignments departing in fall 2016.

For UW–Madison students interested in learning more about the Peace Corps, drop-In advising is available Tuesdays, 3-5 p.m., in Ingraham Hall Room 331, and Fridays, 2-4 p.m., in the Red Gym, Room 106.

In addition, students may contact Kloppenburg, the campus recruiter, by phone at (608) 262-1121 or by email at peacecorps@international.wisc.edu.