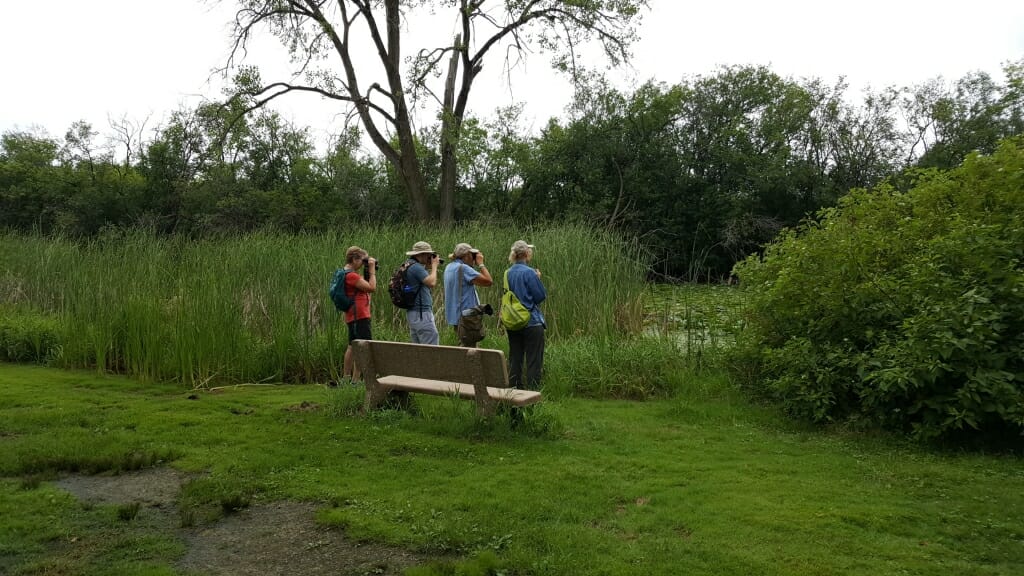 Citizen scientist volunteers scout for dragonflies at Harvey Schmidt Park near the Arboretum in July. Photo by Christy Lowney

Dragonflies catch the eye as they hover, dart or swoop over ponds and wetlands.

To a careful observer, dragonflies also send a message, about the health of the waterways they linger over, and about the condition of far less charismatic insects.

That’s because healthy waters provide the habitat and resources for larvae and adults of all manner of invertebrates, including eye-catching dragonflies. A flash of green or blue above the water can quickly clue researchers in to the condition of the environment just underneath the surface. 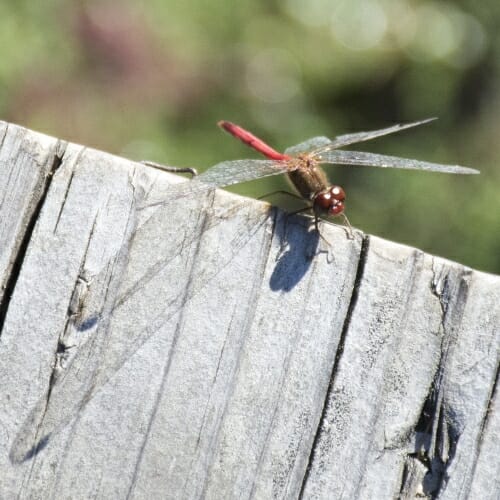 A meadowhawk at the Arboretum. Photo by Molly Fifield-Murray

To track these brightly colored indicators of ecosystem health, University of Wisconsin–Madison Arboretum ecologist Brad Herrick has recruited a slate of citizen scientists. This past summer, volunteers congregated at the Arboretum to begin the Arboretum’s first-ever effort to systematically track dragonfly populations. Herrick hopes these agile flyers will provide insight into the many waterways the Arboretum is charged with protecting.

In all, nine volunteers spotted eight unique species — including the common green darner, twelve-spotted skimmer and the prince baskettail — across six different locations. It’s just the first step in a multi-year process of data collection.

“Simple observations about what species of an organism live where can be really beneficial,” says Herrick. “However, even this data collection can be time consuming. Working alongside a team of volunteers is critical to be able to collect data at various locations throughout the season. It doesn’t take a lot of years of expertise. It just takes willingness, interest and sometimes a little patience.”

In May, more than 20 volunteers attended a training session. Herrick covered the dragonfly life cycle and identification. Though fast, dragonflies are fairly easy to identify when they hover or land on objects. A quick eye, a pair of binoculars — and some patience — are usually all it takes.

The first monitoring event in June was led by Robert Bohanan, an outreach program manager at UW–Madison specializing in dragonflies. Cloudy weather hampered the survey, says Elsa Althen, a retired UW–Madison biology librarian who recently began studying and tracking dragonflies on her own.

“It was quite gloomy out. And dragonflies are most active, sometimes exclusively active, when it’s sunny out. So we really didn’t see anything,” says Althen. “But we had a good time anyway.”

The citizen scientists had more luck in July, scouring the wetlands along Carver Street. White-faced meadowhawks, eastern amberwings, and eastern pondhawks made an appearance. Following these training sessions, volunteers were encouraged to complete additional surveys independently when they could.

Althen earned a botany degree from UW–Madison in 1978. Her interest in dragonflies began when a friend of hers, an expert in Arizona dragonflies, visited Wisconsin and taught her to identify several common species. Althen says that monitoring dragonflies for the Arboretum is a rewarding activity that complements her long-standing interest in nature.

“I find that when I go outside, it’s really enriching to know the names of the things that I’m looking at. They become not just an insect, not just a bird, but a common green darner or an American redstart warbler,” says Althen.

“The more that I can learn about what these things are, how they behave and what their names are, the more they become an integral part of my life and my experience when I go outdoors,” she says.

Waterway health is a key concern for the Arboretum. The Arboretum surrounds most of Lake Wingra and encompasses large tracts of marshes and wetlands. Storm water drains off the Beltline and other roads and is stored on the grounds in large retaining ponds before filtering through the land toward the lake. Dragonfly populations can provide a window into the status of these connected ecosystems.

“The more information we can gather about these ecosystems, the better informed we are about how best we can restore and manage them moving forward,” says Herrick.

Herrick is modifying survey methods and is looking forward to learning more about Arboretum dragonflies and their habitats as the project looks toward future years. He is also looking for new volunteers, who, like Althen, are interested in more fully understanding the world they inhabit. If you’re interested in joining the effort, contact Herrick at bradley.herrick@wisc.edu.