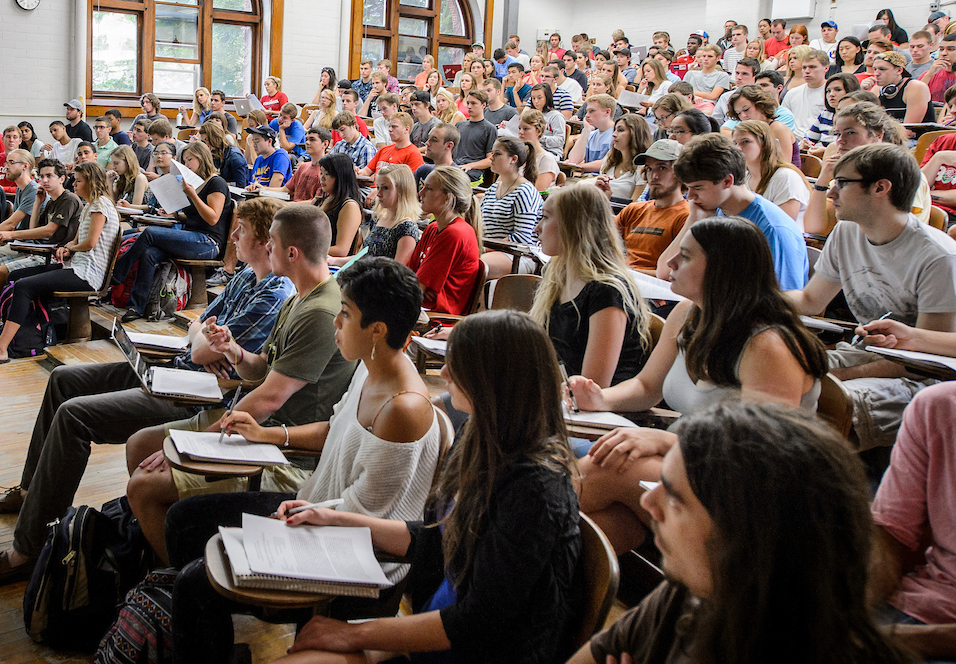 Students in a geography lecture in Science Hall. The average time-to-degree for 2018-19 bachelor’s degree recipients was 3.96 elapsed calendar years, the lowest since the university began actively tracking the measure in the 1980s. Photo: Bryce Richter

Undergraduates at the University of Wisconsin–Madison are taking less time to complete their degrees, setting a record on a key measure of student success.

The average time-to-degree for 2018-19 bachelor’s degree recipients was 3.96 elapsed calendar years, the lowest since the university began actively tracking the measure in the 1980s and the first time the number has dropped below four years, according to the university’s Office of Academic Planning and Institutional Research.

“This is excellent news for Wisconsin families concerned about the cost of higher education,” says UW–Madison Chancellor Rebecca Blank. “We know that students who take longer than four years often accrue additional debt. It is our goal that as many undergraduates as possible complete their program of studies in four years.”

Time-to-degree is calculated based on all the students who graduate in a given year, regardless of when they started. The time-to-degree for 2017-18 graduates was 4.01 elapsed calendar years; for 2016-17 graduates, it was 4.03.

There was more good news in the latest data:

University officials point to numerous factors that likely are contributing to the positive metrics, including motivated, hard-working students, faculty and staff; enhanced student advising; the expansion of summer term; and new online tools that help undergraduates easily find and enroll in the courses they need.

“This has been a concerted, campus-wide effort over many years and involving many facets, tools and programs,” says Provost John Karl Scholz. “It’s a group effort with everyone pulling in the same direction so that students have the resources they need to graduate — and to do so in a timely manner.”

Two years ago, the university upgraded its online academic catalog, called the Guide, so that it provides greater clarity for students and advisors on curricula and program degree requirements. The university also has invested heavily in career services such as Handshake and SuccessWorks. The latter is a new career center launched in the fall of 2017 by the College of Letters & Science, the largest college within UW–Madison, to help students identify career goals and stay on track to achieve them.

“When students have good post-graduation options, they are more likely to stay focused and excited about completing their degrees,” Scholz says. 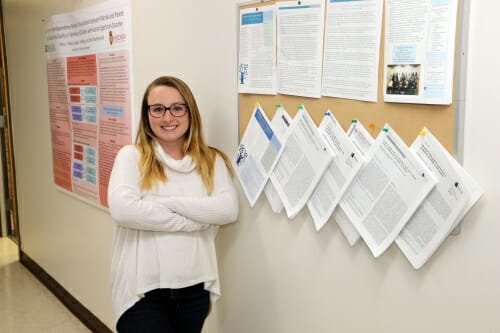 Kim Drastal, an associate research specialist at UW–Madison’s WaismanCenter, graduated from the university in May in just under four years. She credits multiple factors for helping her to earn her degree in a timely manner, including a wealth of engaging opportunities that allowed her to earn credit while building her résumé. Photo: Clark Kellogg / Waisman Center

Kim Drastal, a May 2019 graduate from Rumson, New Jersey, completed her degree in human development and family studies in just under four years. She credits in part the number of wide-ranging learning opportunities at UW–Madison.

“I was able to do so many engaging things at UW–Madison that built my résumé while I earned credit — service learning courses, summer research projects, internships,” she says.

Drastal also credits the academic, social, and mental health support she received from many parts of campus and the community, including University Health Services and friends and professors. She now works full time as an associate research specialist at the Waisman Center on the UW–Madison campus.

Looking ahead, the recently introduced Degree Planner is expected to help students reduce their time-to-degree by allowing them to quickly and simply view the courses they have planned for each term, their grades from past terms, their credit loads per term, and other data. New financial aid initiatives like Bucky’s Tuition Promise, now in its second year, also are expected to quicken time-to-degree.

“Unmet financial needs can force students to delay the completion of their degrees,” Chancellor Blank says. “We believe that our efforts to vigorously increase financial aid — especially Bucky’s Tuition Promise, which provides expanded support to Wisconsin resident students from lower-income families — will help even more undergraduates complete their degrees in four years.”

NOTE: Time-to-degree is calculated based on all students who graduate in a given year, regardless of when they started. Graduation rates are based on a specific entrance cohort, such as the 2015 freshman class. The data sets are different, though there is some overlap.