Through multimedia project, alumni reflect on how the Dow protests changed them 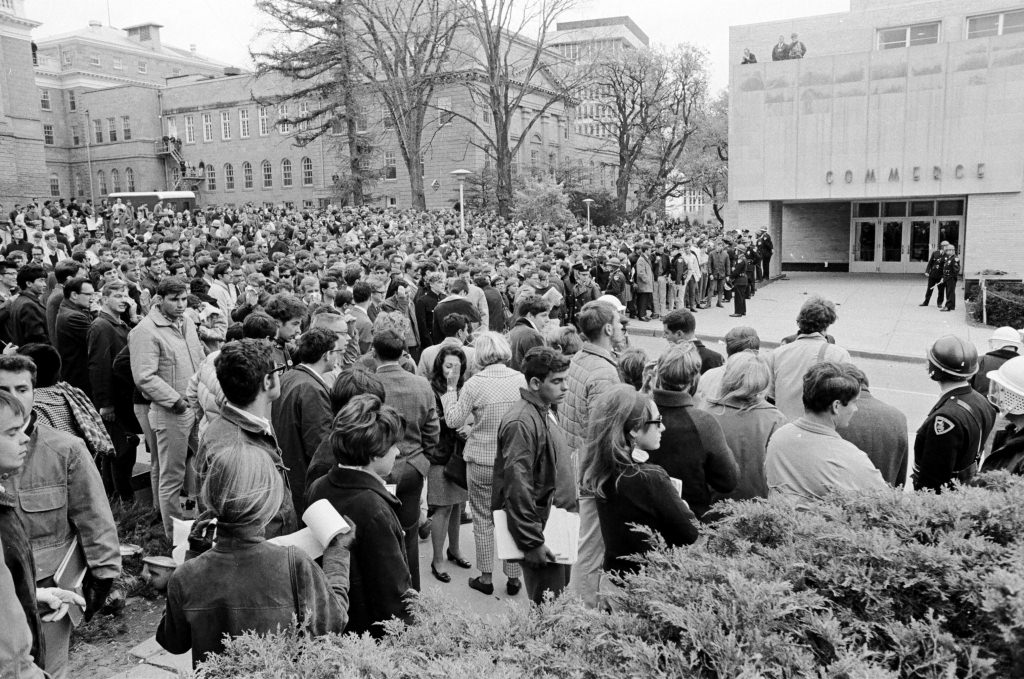 Student demonstrators amass outside the Commerce Building on the UW–Madison campus during a protest of campus recruiting efforts by the Dow Chemical Company on Oct. 18, 1967. PHOTO BY JOHN WOLF AND HEINER GIESE

Fifty years ago, everyday life on the UW–Madison campus came to an abrupt halt for many students.

On Oct. 18, 1967, a sit-in against the Dow Chemical Company erupted into violence as Madison police officers in riot gear forcibly removed antiwar demonstrators from the Commerce Building, now known as Ingraham Hall. Thousands became caught up in the ensuing melee, some as active participants, others as spectators and bystanders. 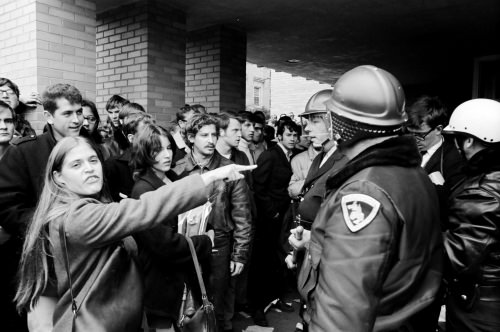 A woman confronts a police officer after protesters had been forcibly removed from the Commerce Building. PHOTO BY JOHN WOLF AND HEINER GIESE

The clash propelled UW–Madison to the forefront of the growing movement against the Vietnam War. The protest is considered the first antiwar demonstration on a major U.S. campus to turn violent, and it was the first time police used tear gas at UW–Madison.

Fifty years later, UW–Madison asked six alumni to reflect on how the Dow protests altered their lives. Their memories anchor “A Turning Point,” an original multimedia web project by University Communications and University Marketing that explores and documents the momentous time. The project can be found at 1967.wisc.edu.

The university also is marking the 50th anniversary with a public history project. UW–Madison Libraries and Madison Public Library are partnering to gather stories from those who experienced the Dow demonstrations. Recording stations will be set up at the Central Library, 201 W. Mifflin St., from 10 a.m. to 8 p.m. on Oct. 18 and 19. Community members are invited to drop in and share their memories.

“The events of October 1967 left a lasting impact on both the campus and the wider community,” says Troy Reeves, head of the oral history program at UW Archives. “The students’ experiences helped shape the campus antiwar culture throughout the remainder of the 1960s and into the next decade. Ensuring that these stories are captured for the future is not only about preserving history, but helping to understand the impact it has had on the present and will have on the future.” 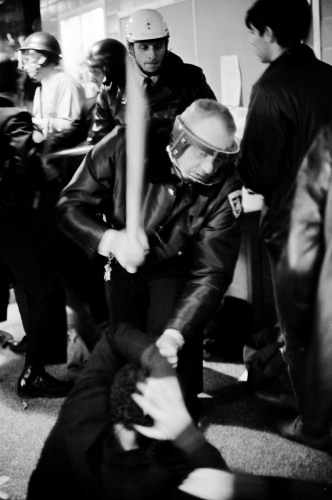 A Madison police officer clubs a protester in a corridor of the Commerce Building as authorities begin forcibly removing demonstrators. Photos such as this one were later used in court to show that police had used their riot sticks against protesters. PHOTO BY JOHN WOLF AND HEINER GIESE

In total, the multimedia project incorporates the experiences of 18 alumni, including two friends — John Wolf and Heiner Giese — who spent the day photographing the Dow protest as neutral observers. Their compelling photos, never before published, provide many of the project’s visuals. In a video shot this summer, the two revisit the Commerce Building.

The views of those quoted in the project span the spectrum, from strongly antiwar to supportive of the Vietnam War and Dow. The company made napalm, a highly flammable gel used on the battlefield by the U.S. military. By early 1967, students were regularly targeting Dow’s recruitment efforts on campus.

“The United States was dropping napalm on children in Vietnam,” says Jane Madell, a student who took part in the sit-in. “Dow Chemical Company was making it, and the university was allowing Dow to recruit students. Everybody was so angry.”

Hank Flacks, an English student, showed up on Oct. 18, 1967, to participate in what he thought was a peaceful act of civil disobedience. He ended up being knocked unconscious by a blow from a police billy club — one of nearly 50 students treated at hospitals.

“As students, we had no weapons other than our voices and bodies to indicate our opposition to the war,” he says. “The ferocity of the response by campus police to that demonstration still reverberates today.”

Others bristled at the protesters and their tactics.

“The instigators of the demonstrations, the outside agitators, were very unpatriotic,” says Andy Terpstra, a student who did not participate in the protests. “They got the students very excited, but I felt they were using the Vietnam War as a proxy to spread their views on socialism and Communism.”

Bob Lawrence, an Army ROTC cadet at the time, witnessed the riot and said he was shocked that protesters mocked police officers by chanting “Sieg Heil” and giving them the Nazi salute.

Stephen Cimbala, a bystander who was pursuing a graduate degree in political science in 1967, watched in horror as police beat students with nightsticks. He now looks back on the Dow protest as a political science professor who has written extensively about conflict resolution and de-escalation in relation to international conflicts and nuclear deterrence. He calls the Dow protest a sad lesson learned by university administrators and city police officers.

“We now know from research and experience that the first rule of dealing with confrontations between political authority and public dissenters is: Do not make the situation worse,” says Cimbala, who teaches at Penn State University, Brandywine.

Administrators could have turned off the water in the Commerce Building, shut off the electricity, and waited out the demonstrators, he says. Or they could have sent in beer and pizza and held an impromptu political discussion. 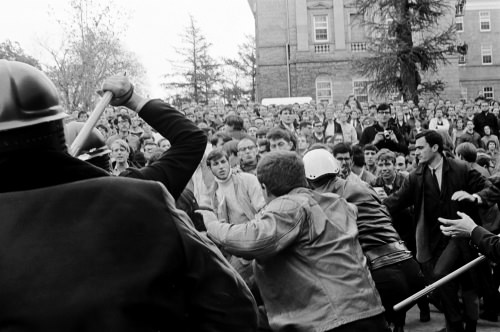 A Madison police officer raises his nightstick during the violent melee that ensued on the UW–Madison campus after officers forcibly cleared anti-Dow protesters from the Commerce Building on Oct. 18, 1967. PHOTO BY JOHN WOLF AND HEINER GIESE

Another lesson is that police involved in campus situations should have the specialized training necessary for handling large groups of young people, Cimbala says.

“I am not faulting the Madison police at the time,” he says. “They had never been called to the campus before to deal with this kind of situation.”

In the years following the Dow demonstration, the Madison Police Department dramatically changed its policies related to large protests, says spokesman Joel DeSpain. A team of officers specially trained in crowd management now leads the response, with the goal of keeping officers in “soft gear” and avoiding riot gear. The emphasis is on working proactively with protesters to facilitate a safe demonstration.

One theme throughout the alumni reflections is that, despite the campus upheaval, education continued at UW, though not always in a classroom or from a textbook.

“Sometime after I graduated, my mother said to me, ‘It’s really too bad you had to go to the University of Wisconsin with such turmoil going on,’” recalls Bob Grueneberg, a retired assistant U.S. attorney who credits the protests with helping him develop a keener sense of justice. “I said, ‘Mom, I wouldn’t trade that for the world.’ That was one of the best things that ever happened in my life. I look back on it as a great experience from a political, personal and historical point of view. It was part of my education.” 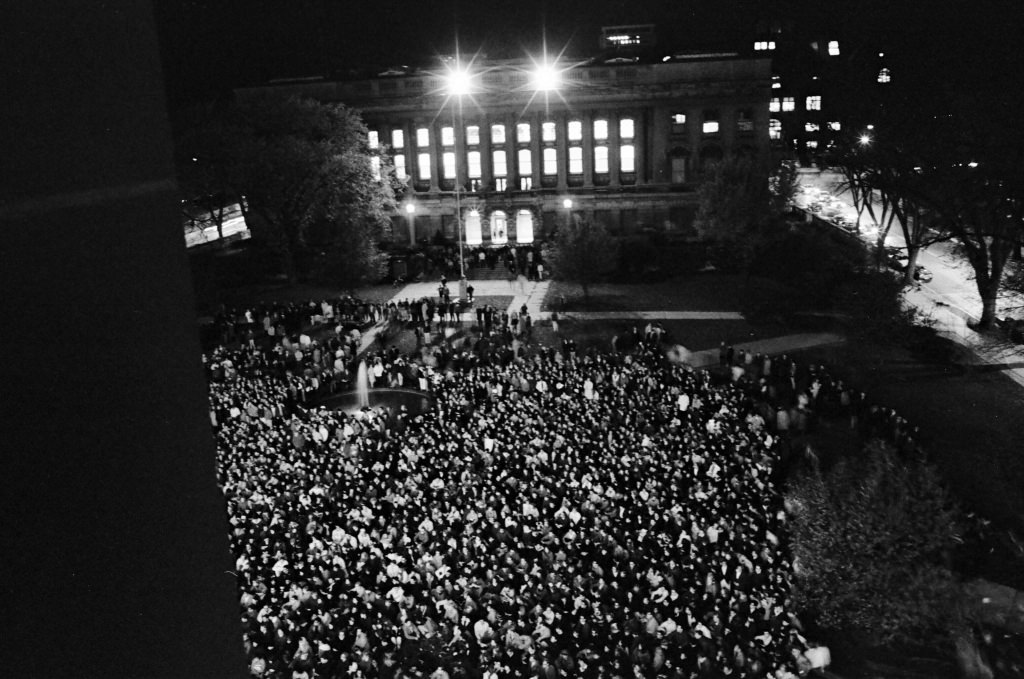 On the evening of the Dow protest, thousands of students regrouped on Library Mall and decided to boycott classes the next day to show their disgust at what they considered police brutality. The prominent building in the background houses the Wisconsin Historical Society.
Audio transcript: John Wolf: “I think that was the same night. This is Library Mall. It drew a big crowd of demonstrators, too. And then the next day there were continuing demonstrations: ‘Cops off campus, Troops out of Vietnam.’ “
Heiner Giese: I remember a gathering — I wonder if it was that same night, it was soon thereafter — at the Terrace. It was a very quiet, discussion-kind of thing, and I remember the phrase this one professor used, ‘The fabric of the university has been torn.’ That just stuck with me for some reason.” PHOTO BY JOHN WOLF AND HEINER GIESE