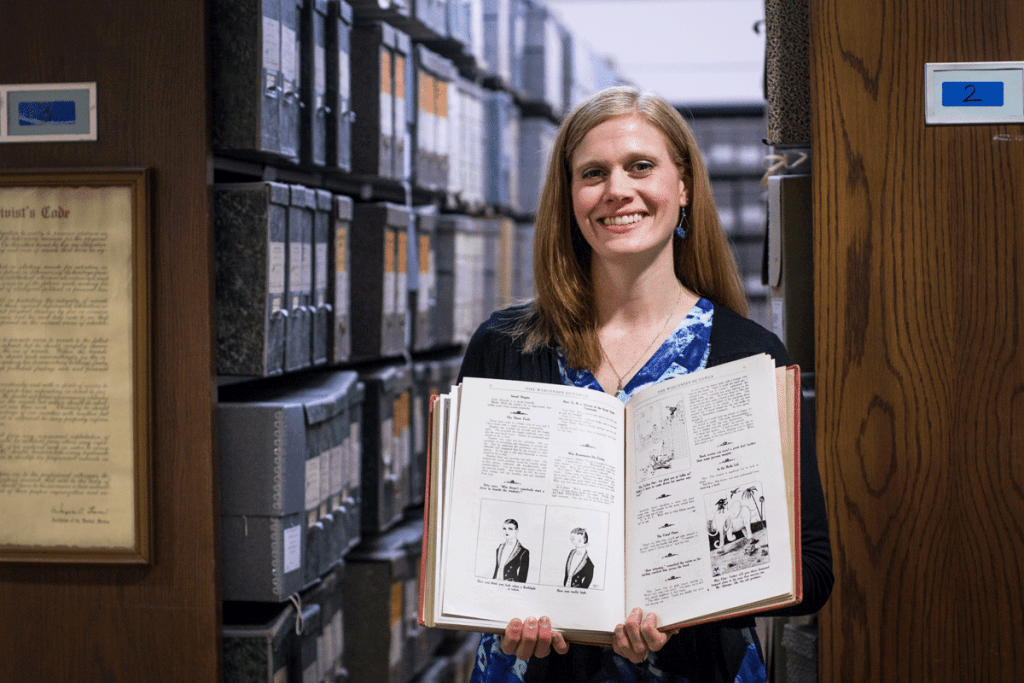 Katie Nash, head of University Archives, displays the May 1921 Octopus, a UW–Madison humor magazine, in which what’s now being called the first meme ever appeared. Photo by Emily Hamer

Vitamin A and B.

The University of Wisconsin–Madison is known for many great discoveries. And just this week, another important discovery was made – the world’s first meme. 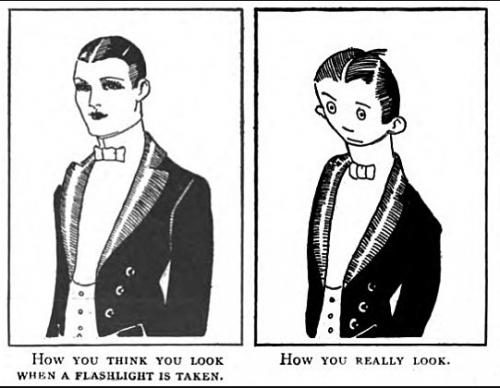 This was published in a 1921 edition of the Octopus, a UW–Madison humor magazine. But it would be right at home in social media. UW-Madison archives

It didn’t start out as a meme but the format for the joke found in a 1921 copy of the Wisconsin Octopus, a humor magazine at UW–Madison published between 1919 and 1959, plays with the popular “expectations vs. reality” that abounds throughout social media.

The discovery of what may be the world’s first meme (before the word meme was even invented) was first celebrated on Tumblr earlier this week and has since been shared thousands of times.

Why? Well, who can’t relate to feeling like you’re looking pretty dapper until you look in the mirror and see reality staring back. Hard. 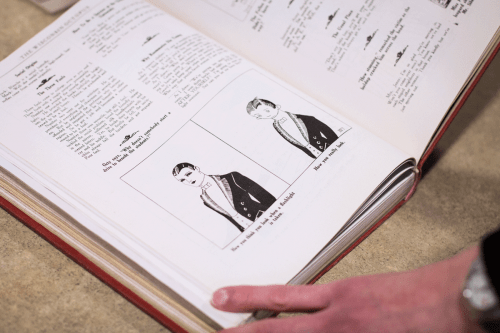 The meme as it appears in the Octopus. Photo by Emily Hamer

BBC News covered the breaking story, citing Richard Dawkins in his 1976 book “The Selfish Gene” as the person who coined the word meme, meaning “ideas that spread from brain to brain.”

Time, Vice, Gizmodo – media were also there to cover the emerging story.

“That’s part of the beauty of making collections available for all to use, you never know what gems they might find,” Nash says.

As for the first meme, she’s not so sure.

“I tend to be cautiously optimistic when labeling anything as the first, but it’s very exciting that UW–Madison may have created/ published one of the earliest memes,” Nash says.

Fair enough. But she does know the value of preserving things from the past. She was excited to see the original image of the meme, right there on page 18 of the May 1921 issue of the Wisconsin Octopus.

“There’s something special about seeing it in print. The magazine is one of the many humor publications at UW–Madison and if you need a good laugh, come peruse our copies,” Nash says. “Most humor transcends generations, but of course there are some things that were considered ‘funny’ in the 1920s and during other decades that would not be considered humorous today. It makes me wonder what we find funny today that won’t be amusing years from now.” 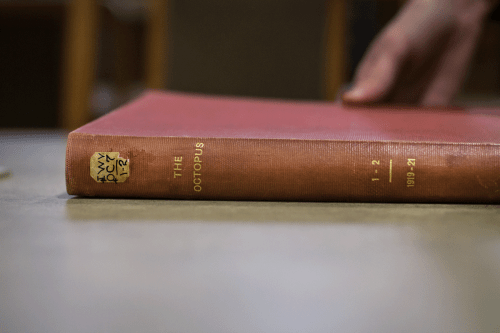 The Octopus, a UW–Madison humor magazine from an earlier era. Photo by Emily Hamer

It might surprise people to know that all types of materials are collected in the University Archives, including paper records, electronic records, photographic media, oral histories, audio/video recordings, 3-dimensional objects/artifacts, scrapbooks, maps, posters, and other ephemera and memorabilia, ranging in dates from the 19th century to present day. It’s all mostly available for people to use and view and touch.

University Archives has a significant collection of Aldo Leopold, which can be viewed online or in person, and quite a rich set of materials relating to the Vietnam War era (photographs, chancellors papers, oral histories, posters and other ephemera). It also has an LGBTQ archive which includes oral histories, personal papers, photographs, ephemera and organizational records related to LGBTQ life in Madison and Dane County from the 1940s to today.

Their collections include more than 26,000 cubic feet of paper and published material; 2.5 million photos, over 1,400 oral histories, 4,500 films and videos, 8,500 audio recordings, memorabilia, campus publications and other University records.

“The intention for collecting and preserving photographs, stories, life journeys, and material goods from our lives or an institution/organization has certainly evolved over time. People still collect, but how they collect, the frequency, and methods of collecting have changed,” Nash says. “In general, people still want to feel connected to others, organizations, time periods, and/or institutions –and there is still a large amount of ‘stuff’ being generated that help people feel and stay connected. The challenge is how long will the ‘stuff’ last, especially born-digital and electronic records, and how can archivists and librarians keep up with the accelerated environment of collecting, preserving, and making content available.”

While the mission of archives is the same, what it’s collecting is changing. Yes, memes will be among the material future generations may or may not find so funny.

“I know some institutions are actively collecting memes that pertain to some aspect of an institutions history. Capturing memes and social media is one of the initiatives that the University Archives is exploring,” Nash says. “Memes can represent an important part of online culture–a culture that archival repositories are increasingly documenting.”