Termite gut holds a secret to breaking down plant biomass 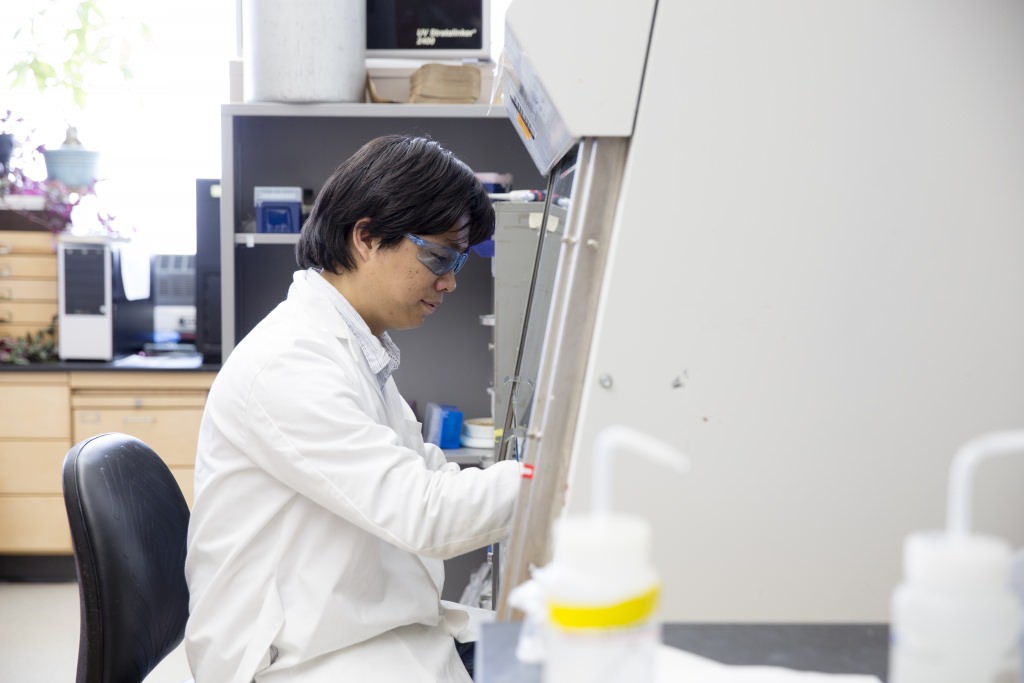 Hongjie Li, a UW–Madison postdoctoral researcher, was the first to observe close-up the symbiotic system that unites termites with the fungus Termitomyces. UW-Madison/James Runde

In the Microbial Sciences Building at the University of Wisconsin–Madison, the incredibly efficient eating habits of a fungus-cultivating termite are surprising even to those well acquainted with the insect’s natural gift for turning wood to dust.

According to a study published today (April 17, 2017) in the journal Proceedings of the National Academy of Sciences, when poplar wood undergoes a short, 3.5-hour transit through the gut of the termite, the emerging feces is almost devoid of lignin, the hard and abundant polymer that gives plant cells walls their sturdiness. As lignin is notorious for being difficult to degrade, and remains a costly obstacle for wood processing industries such as biofuels and paper, the termite is the keeper of a highly sought after secret: a natural system for fully breaking down biomass.

“The speed and efficiency with which the termite is breaking down the lignin polymer is totally unexpected,” says John Ralph, a UW–Madison professor of biochemistry, researcher at the Great Lakes Bioenergy Research Center (GLBRC) and lignin expert. “The tantalizing implication is that this gut system holds keys to breaking down lignin using processes that are completely unknown.”

Young worker termites build combs (such as the one pictured here) from their own wood-fed feces, and cultivate the fungus that breaks the comb into simple sugars that feed older worker termites. UW-Madison/James Runde

Hongjie Li, co-first author of the study, began studying the termite as graduate student at Zhejiang University in Hangzhou, China. Now a postdoctoral researcher in the lab of UW–Madison bacteriology professor and GLBRC researcher Cameron Currie, Li was the first to keep this genus of termite alive in a lab setting, and the first to observe close-up the symbiotic system that unites the termites with the fungus Termitomyces.

The entire process, as is often the case with social insects, is complex. Young termites, or young workers, collect and eat the wood. The termites’ fungal-laden feces then become an integral part of a fungal comb, a sponge-like structure the termites create within a protected chamber. On the comb, the fungi further degrade the wood until its simple sugars are ready, some 45 days later, to be consumed by old worker termites.

“For decades, everybody just thought that the young worker wasn’t doing anything, because of how rapidly the wood passes through its gut,” says Li. “But after observing the termites in the lab, I assumed there were some functions there, since the fungi simply cannot live on the wood on their one.”

To explore those functions, Li enlisted the help of co-first author Daniel Yelle, a research forest products technologist with the U.S. Department of Agriculture’s Forest Products Laboratory, and an expert in wood-degrading fungal systems.

“This system is unique because the fungus and the termite can’t live without each other,” says Yelle. “They’re symbiotic, and they work together very efficiently to do things fungi can’t do in nature. Together they do everything more rapidly.” 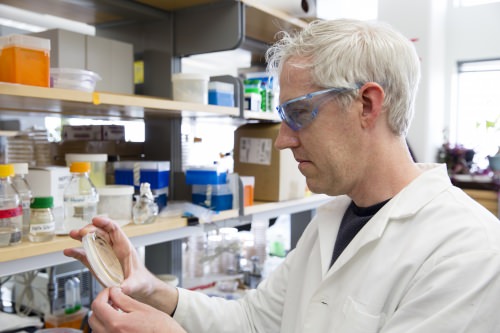 The system may be symbiotic, but the processes involved in the gut transit — or the mechanisms by which the termite gut succeeds in cleaving even the hardest-to-cleave portions of the lignin — are still unknown. Future research will focus on determining which enzymes or bacterial systems might be at work in the gut. If that super enzyme or process can be replicated outside of the termite, it could result in a dramatic improvement in the way we process wood and make biofuels, improving economics and cutting energy use.

“This is a great example of the value of basic science research,” says Currie. “Studying how termites process plant biomass in nature not only helps us understand our natural world, but it could contribute to our own efforts to break down biomass.”