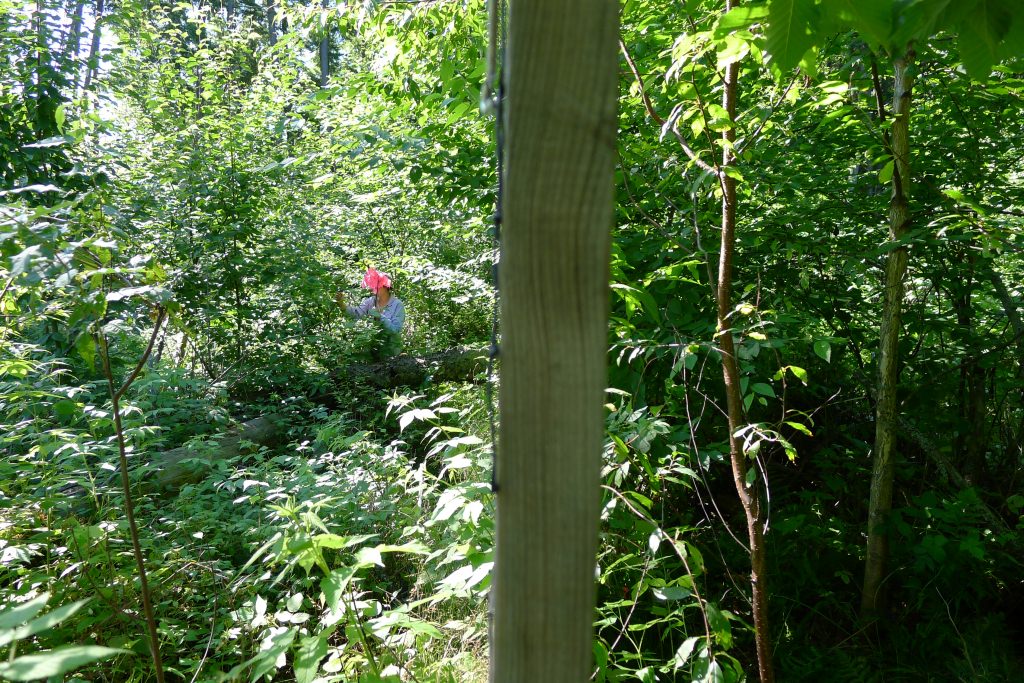 Forest understory differences inside and outside of a fence designed to exclude deer at UW–Madison’s Kemp Research Station in Vilas County. The forest on the left is outside the exclosure and shows the dramatic effects of deer on forest understory. Photo: Katie Frerker

It is widely known that the white-tailed deer is a nonstop eater. Unless it is sleeping or fleeing from a predator, the keystone North American herbivore is nearly always nibbling.

Ecologically, deer herbivory is a fairly well understood phenomenon. The presence, abundance and reproductive success of many plant species are directly affected by deer, whose populations are orders of magnitude greater in some regions than they were before European settlement.

Now, scientists are looking beyond herbivory to better understand the indirect effects of deer on eastern North American forest landscapes. In particular, scientists are interested in how the animal’s presence and behaviors affect the composition and overall health of the wildflowers and other herbs — what scientists call understory communities — that blanket the forest floor. 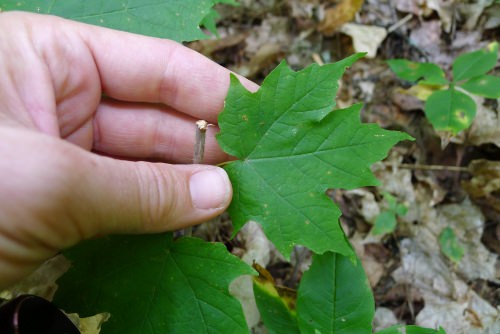 “Deer are affecting understory communities in many different ways,” explains Autumn Sabo, a University of Wisconsin–Madison plant ecologist and the lead author of a new study that teases out some of the secondary impacts of white-tailed deer on forest ecosystems. “It is only in recent years that scientists have started to look at factors beyond herbivory.”

Writing this week (Feb. 6, 2017) in the Journal of Ecology, Sabo and her colleagues detail how deer affect forest plant composition by altering facets of the forest environment, including light availability, soil compaction, and the thickness of a particular layer of soil.

The study focused on 17 deer exclosures, patches of forest ranging in size from a hundred square meters to eight hectares, where 2- to 3-meter high fences have been installed to keep deer out. The exclosures, some of which have been in place for decades, are located in the temperate hardwood forests of northern Wisconsin and Michigan’s Upper Peninsula.

“In northern Wisconsin and the Upper Peninsula of Michigan, we found little herbivory damage on forest herbs,” says Sabo, who conducted the study with Katie Frerker of the U.S. Forest Service, and Don Waller and Eric Kruger of UW–Madison. “Deer seem to be eating primarily young trees.” 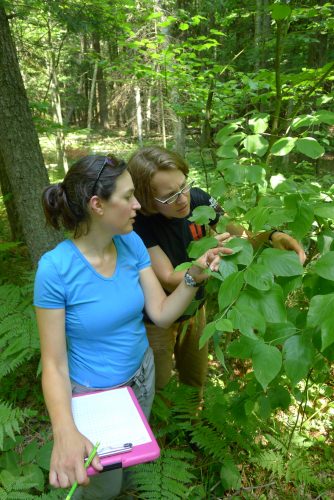 Findings from the new study suggest scientists need to revisit their thinking about the effects of deer as, previously, most ecologists believed the biggest impact of deer on understory species was herbivory. That idea may be true in places like the northeastern U.S. where a lot of direct browsing damage has been observed on wildflowers, says Sabo. But for northern forests in the Upper Great Lakes region, the indirect effects of deer nipping off saplings appear to be more important.

Because young trees have been nibbled down, light levels on the forest floor increase and a whitish layer of soil known as the E horizon thickens as colored nutrients are lost. Deer also increase soil compaction, likely through hoof action.

“Shifts in these environmental factors may result in forest composition changes,” notes Sabo, a graduate student and instructor in UW–Madison’s Department of Forest and Wildlife Ecology. “For example, more tree cover is correlated with more herbs that are spread by animals eating their fruit, including trillium. Higher light levels favor raspberries and ferns, and the thicker soil E horizons correlate with fewer lillies and violets.”

Soils that have been compacted grow more grasses and sedges and also are more favorable to non-native plant species such as dandelions, she adds.

The results of the new study may provide an additional explanation for why forest understory plant communities are slow to recover after pressure from deer is eased.

“With exclosures, sometimes you see almost immediate effects,” according to Sabo. “Other times you see very little change, which makes us suspect legacy effects” from having had a lot of deer on the landscape.

The findings of the new study can help scientists design experiments to show the effects of changes in light and soil resources on plant communities. Critically, the results can also inform efforts to conserve forest biodiversity and improve forest restoration techniques.

The study was supported by funds from the Friends of Peninsula State Park, the UW–Madison Department of Botany, and the McIntire-Stennis Program.