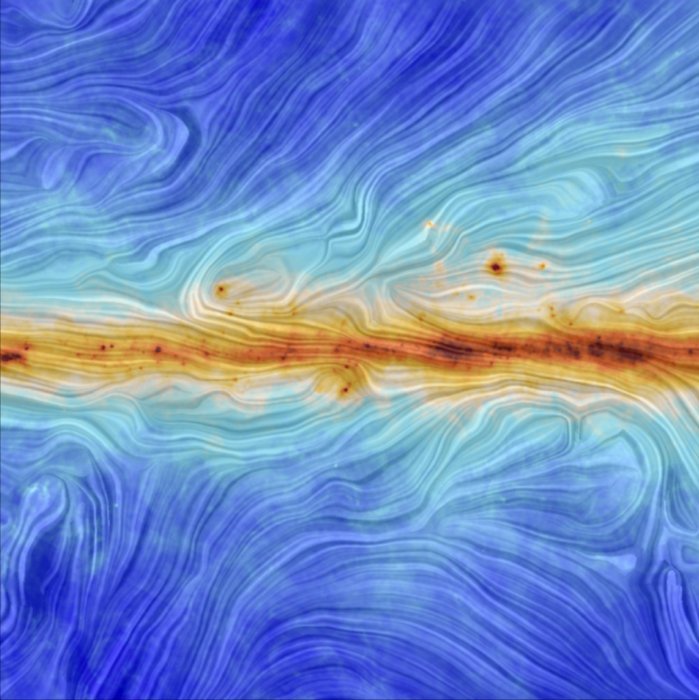 The formation of stars in the turbulent billows of gas and dust of the Orion Molecular Cloud, depicted in an illustration based on data from the European Space Agency’s Planck satellite. ESA and the Planck Collaboration

A new, more accessible and much cheaper approach to surveying the topology and strength of interstellar magnetic fields — which weave through space in our galaxy and beyond, representing one of the most potent forces in nature — has been developed by researchers at the University of Wisconsin–Madison.

Together with gravity, magnetic fields play a major role in many of the astrophysical processes — from star formation to stirring the massive dust and gas clouds that permeate interstellar space — that underpin the structure and composition of stars, planets and galaxies. On the galactic scale, magnetic fields dominate the acceleration and propagation of cosmic rays, and play an important role in transferring heat and polarized radiation.

What’s more, the polarized radiation that arises from galactic magnetic fields exceeds by orders of magnitude that of the Cosmic Microwave Background (CMB), the relic radiation of the first moments of the universe. The next milestone in understanding the origin of the universe, some scientists believe, requires measuring the CMB’s polarized radiation. Importantly, unraveling the topology of the intervening magnetic fields between Earth and the CMB will be a necessary step to reliably obtain those data.

But despite their importance and pervasive influence, interstellar magnetic fields represent one of the final frontiers of astrophysics. Little is known about them, in large part, because they are exceedingly difficult to study.

“There are very limited ways to study magnetic fields in space,” explains Alexandre Lazarian, a UW–Madison professor of astronomy and an authority on the interstellar medium, the seemingly empty spaces between the stars that are, in fact, rich in matter and feature twisted, folded and tangled magnetic fields composed of fully or partially ionized plasmas entrained on magnetic fields. “Our understanding of all these (astrophysical) processes suffers from our poor knowledge of magnetic fields.”

Now, much of that knowledge may be more readily at hand. Writing this week (June 10, 2019) in the journal Nature Astronomy, an international team led by the Wisconsin astrophysicist demonstrates a new methodology capable of tracing the orientations of magnetic fields in the swirl of interstellar space.

The proof-of-concept reported in Nature Astronomy builds on a series of theoretical and numerical studies published over the last two years by Lazarian and his students, and which lay out a radical new approach to mapping the tangle of magnetic fields in space.

Until now, much of the detailed mapping of magnetic fields in diffuse environments such as clouds of dust and gas in space involved infrared polarimetry with instruments deployed either on satellites or balloons flown high in the stratosphere.

The new method, known as the Velocity Gradient Technique and informally as the “Wisconsin technique,” uses previously collected observational data from a variety of ground-based telescopes, transcending the need to put instruments in space, a costly and limited resource for astronomers. Building on studies of turbulence in magnetic fields in conducting fluids, Lazarian and his students devised the new statistical approach to measure the topology of magnetic fields using routine spectroscopic observations taken from the ground.

For the most part, infrared light is absorbed by Earth’s atmosphere, which is why conventional magnetic field measurements require telescopes positioned on long-duration, high-altitude balloon flights, or above it on satellites. In recent years, many new measurements of interstellar magnetic fields, for instance, were gathered using the Planck satellite, a European space observatory with infrared capabilities and operational from 2009 to 2013.

Little is known about interstellar magnetic fields, one of the final frontiers of astrophysics, because they are exceedingly difficult to study. Now, a new approach to surveying their topology and strength has been developed.

Applying the new Wisconsin technique to a number of interstellar molecular clouds whose magnetic fields had been previously measured by the Planck satellite, Lazarian and his students were able to generate high-resolution maps using existing ground-based observations.

“The technique provides magnetic field maps of resolution comparable to maps obtained with the Planck mission,” says Lazarian, “and it utilizes spectroscopic observations collected by researchers for other purposes. Given that the technique utilizes data from ground-based telescopes and interferometers, the resolution of magnetic field maps can be significantly improved.”

In addition to determining the direction of the interstellar magnetic fields, the new methodology can determine the strength of the field at a fine scale, down to each pixel on a map. “This demonstrates that the Wisconsin technique can revolutionize studies of magnetic effects on star formation by using existing ground-based telescopes without waiting for new space-based polarization missions with a higher resolution in some distant future,” Lazarian says.

The new technique, Lazarian adds, also opens a unique window to the development of three-dimensional magnetic field maps, work that has already been demonstrated in a corresponding paper published in the Astrophysical Journal by Lazarian and his student, Diego Gonzales Casanova.

To contrast the capabilities of the new technique with traditional polarimetry, Lazarian and his group, including UW–Madison physics graduate student Yue Hu and astronomy graduate student Ka Ho Yuen, key authors of the new Nature Astronomy report, deployed their new methodology to produce the first magnetic field map of the Smith Cloud, a mysterious cloud of atomic hydrogen that seems to be crashing onto the disk of the Milky Way. Previous efforts to map the cloud’s magnetic field were frustrated by its weak infrared emission, obscuring dust and galactic atomic hydrogen along the same line of sight.

This work was supported through National Science Foundation grants 1715754 and 1816234, and NASA grant NNX14AJ53G. The research was carried out in part at the Jet Propulsion Laboratory, which is operated for NASA by the California Institute of Technology.