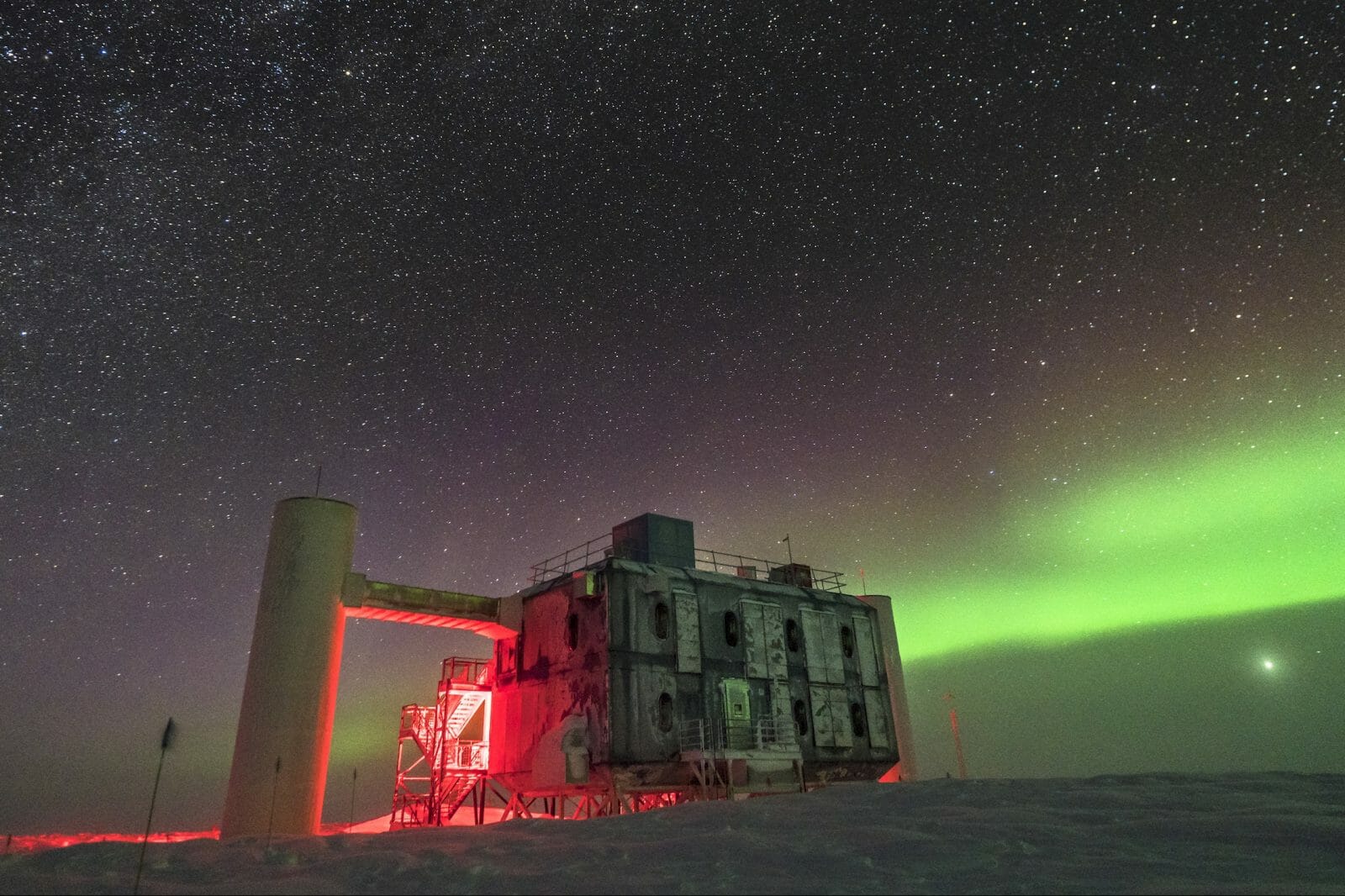 Solving the Mystery of Cosmic Rays

Since cosmic rays were discovered in 1912, scientists have sought the origins of these mysterious particles. In September 2017, a flash of blue light in the ice deep beneath the South Pole set researchers on a path to resolving this century-old riddle.

With the help of an icebound detector situated a mile beneath the South Pole, an international team of scientists has found the first evidence of a source of high-energy cosmic neutrinos, a ghostly subatomic particle that can travel in a straight line for billions of light years, passing unhindered through galaxies, stars and anything else nature throws in its path. 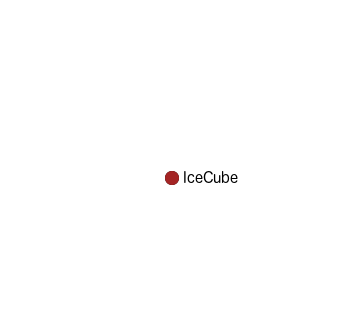 IceCube is located at the South Pole.

The observation, made by the IceCube Neutrino Observatory at the Amundsen-Scott South Pole Station, helps resolve a more than century-old riddle about what sends subatomic particles such as neutrinos and high-energy cosmic rays speeding through the universe.

Since they were first detected more than a hundred years ago, cosmic rays – highly energetic particles that continuously rain down on Earth from space – have posed an enduring mystery: What creates and propels the particles across vast distances? Where do they come from?

Two papers published this week (July 13, 2018) in the journal Science include the first tangible evidence that a blazar – a giant elliptical galaxy with a massive, rapidly spinning black hole at its core – is the source of a high-energy neutrino detected Sept. 22, 2017 by the National Science Foundation-supported IceCube Observatory. A signature feature of blazars are twin jets of light and elementary particles that shoot like laser beams from the poles on the axis of the black hole’s rotation. (Although not visible to the naked eye, the galaxy, denoted by astronomers as TXS 0506+056, is situated in the night sky just off the left shoulder of the constellation Orion and is an estimated 4 billion light years from Earth.)

Equipped with a nearly real-time alert system triggered when neutrinos of the highest energies crash into an atomic nucleus in or near the IceCube detector, the observatory – in less than a minute after the initial detection – relayed coordinates to telescopes worldwide for follow up observations. Two gamma-ray observatories, NASA’s orbiting Fermi Gamma-ray Space Telescope and the Major Atmospheric Gamma Imaging Cherenkov Telescope or MAGIC in the Canary Islands, detected a flare of high-energy gamma rays associated with TXS 0506+056, a convergence of observations implicating the blazar as the most likely source. 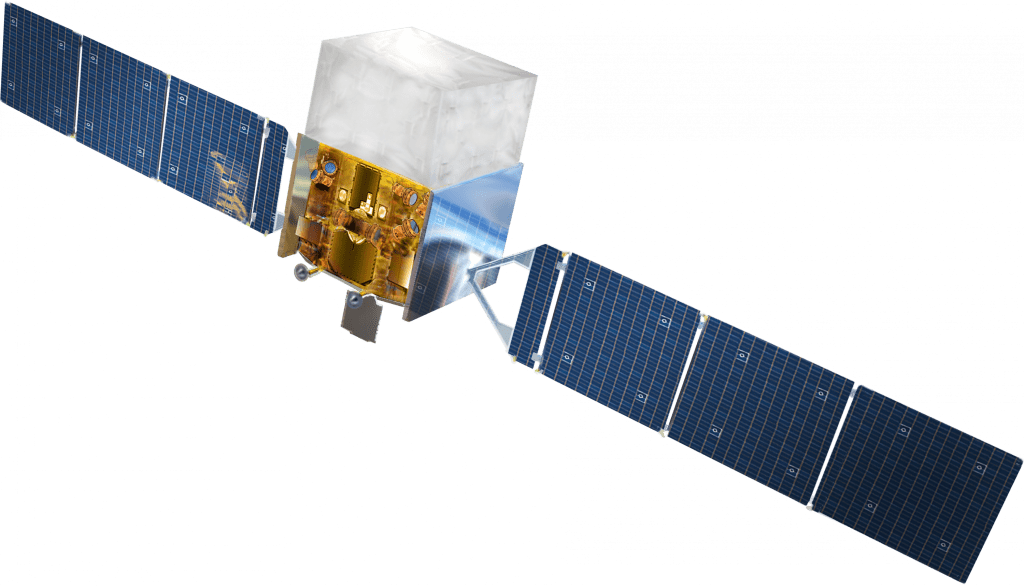 The Fermi telescope first detected enhanced gamma-ray activity within less than 0.06 degrees of the neutrino pointer from IceCube, linking the high-energy photons that compose gamma rays to TXS 0506+056. It was the strongest gamma ray flare in a decade of Fermi observations of the source, a known but little studied galaxy. Follow-up observations by MAGIC detected gamma rays of even higher energies.

The gamma-ray observations show that the blazar is among the most luminous objects in the known universe and adds to the body of multi-messenger evidence that the blazar is powerful enough to accelerate high-energy cosmic rays and associated neutrinos.

Austrian physicist Victor Hess proved in 1912 that the charged particles scientists were detecting in the atmosphere were coming from space and not from other suspected sources on Earth such as radioactive elements.

In the decades since, scientists speculated that the most violent objects in the cosmos, things like supernova remnants, colliding galaxies and the energetic black hole cores of galaxies known as active galactic nuclei were the potential sources of the particles. Curiously, blazars, a type of active galactic nuclei, were lower on the list. There are several thousand known high energy blazars, some of the brightest objects in the sky.

“It is interesting that there was a general consensus in the astrophysics community that blazars were unlikely to be sources of cosmic rays, and here we are,” says Francis Halzen, a University of Wisconsin–Madison professor of physics and the lead scientist for the IceCube Neutrino Observatory. “Now, we have identified at least one source that produces high-energy cosmic rays because it produces cosmic neutrinos. Neutrinos are the decay products of pions. In order to produce them you need a proton accelerator.”

Cosmic rays are known to be mostly protons or atomic nuclei. The particles are sent speeding across the universe because the galaxies where they are created act in the same way as the particle accelerators used on Earth, only they are far more powerful.

Following the Sept. 22 detection, the IceCube team quickly scoured the detector’s archival data and discovered a flare of more than a dozen astrophysical neutrinos from late 2014 and early 2015, coincident with the same blazar, TXS 0506+056. That independent observation greatly strengthens the initial detection of a single high-energy neutrino and adds to a growing body of data that indicates the blazar is the first known accelerator of the highest energy neutrinos and cosmic rays.

The twin jets of light and elementary particles that emanate from the blazar are so bright because one is pointing directly at Earth. Blazar jets are also known to flare for periods of minutes to many months, increasing the intensity of the beam by a factor of 10 or more.

“What’s special,” says Albrecht Karle, another senior IceCube scientist and UW–Madison physics professor, “is we are in the beam. It is pointing at us.”

Because cosmic rays are charged particles, their paths cannot be traced directly back to their sources due to the powerful magnetic fields that litter interstellar and intergalactic space, which warp their trajectories. Neutrinos, however, are uncharged particles, unaffected by even the most powerful magnetic field. Because they interact with matter at only very small subatomic distances and have almost no mass – hence their nickname “ghost particle” – neutrinos travel in a straight line from where they originate, breezing through planets, stars and entire galaxies, giving scientists a pointer almost directly to their source.

Detecting the highest-energy neutrinos requires a massive particle detector and IceCube is by volume the world’s largest. Encompassing a cubic kilometer of deep, clear ice directly beneath the surface of the South Pole, the detector is composed of more than 5,000 light sensors arranged in a grid. 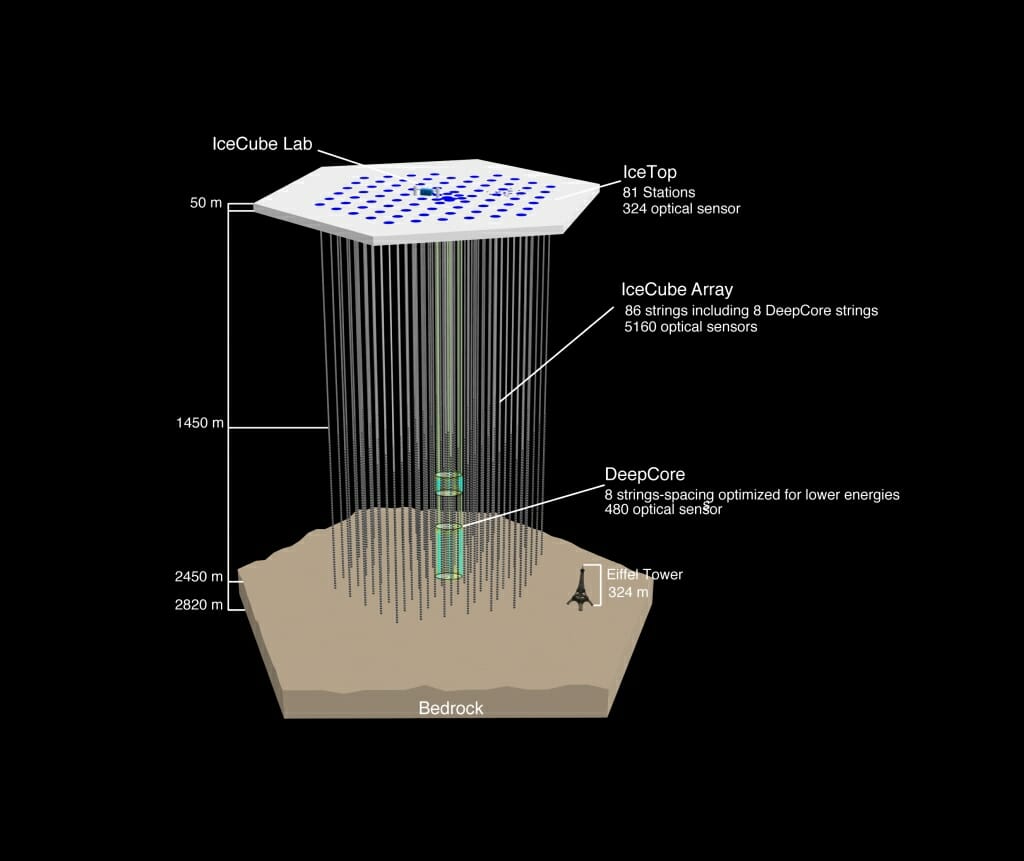 IceCube Schematic showing the scale of the array. The depth of the strings of detectors is almost 3000 meters or about 9 times the height of the Eiffel Tower

When a neutrino interacts with the nucleus of an atom, it creates a secondary charged particle, which, in turn, creates a characteristic cone of blue light that is detected by IceCube and mapped through the detector’s grid of photomultiplier tubes.

A photomultiplier tube and the hole in the ice into which it is dropped.

Because the charged particle and light it creates stay essentially true to the neutrino’s direction, it gives scientists a path to follow back to a source.

IceCube continuously monitors the sky, including through the Earth to the sky in the Northern Hemisphere, and detects a neutrino every few minutes. Most of the neutrinos it detects, however, are low-energy, created in more common phenomena such as when showers of subatomic particles are created as cosmic ray particles crash into atomic nuclei in the Earth’s atmosphere.

Particles of particular interest to the IceCube team pack a more energetic punch. The particle that sent astronomers racing to their telescopes had an energy of approximately 300 TeV. (The energy of the protons circulating in the 26.7-kilometer ring of the Large Hadron Collider is 6.5 TeV.)

Bolstering the observations made by IceCube, Fermi and MAGIC, are accumulating coincident observations from other telescopes, including optical, radio and X-ray telescopes. The evidence for the observation of the first known source of high-energy neutrinos and cosmic rays is compelling, says Halzen. The ability to marshal telescopes globally to make a discovery using a variety of wavelengths and coupled with a neutrino detector like IceCube, marks a milestone in what scientists call “multi-messenger astronomy,” says Halzen.

“All the pieces fit together,” says Karle, noting that the December 2014 flare pulled from the observatory’s archived data adds to a growing body of data implicating TXS 0506+056 as the source. “The neutrino flare in our archival data became independent confirmation. Together with observations from the other observatories, it is compelling evidence for this blazar to be a source of extremely energetic neutrinos, and thus high-energy cosmic rays.”

The breakthrough, say Halzen and Karle, helps resolve one of the oldest questions in astrophysics and astronomy.

IceCube was built specifically to identify and track high-energy neutrinos. It sighted the first neutrinos from beyond our galaxy in 2013 and since has made a raft of fundamental measurements in the emerging field of neutrino astronomy, helping scientists make sense of matter in its most elementary forms.

The IceCube Neutrino Observatory is funded primarily by the National Science Foundation. It is operated by an international collaboration that includes more than 300 scientists from 49 different institutions in 12 countries. Based at UW–Madison, the observatory is part of the Wisconsin IceCube Particle Astrophysics Center, which brings together scientific, engineering, computing and educational resources around the theme of particle astrophysics.

What are cosmic rays? Why do they matter?

What is a blazar?

What is multi-messenger astronomy?