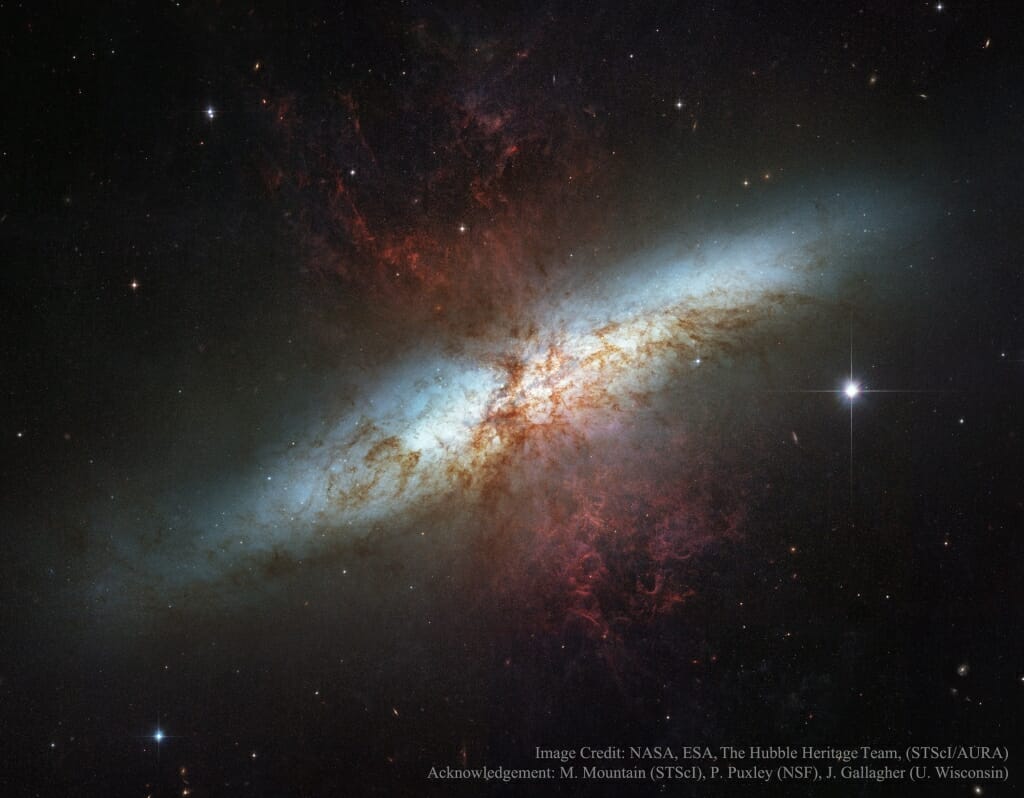 An improved model for how shear-flow turbulence changes in different systems will more easily address previously intractable problems for understanding phenomena such as star formation and the dynamics of galaxies without the need for expensive supercomputers. NASA, ESA, The Hubble Heritage Team (STScI/AURA)

For scientists wrestling with problems as diverse as containing superhot plasma in a fusion reactor, improving the accuracy of weather forecasts, or probing the unexplained dynamics of a distant galaxy, turbulence-spawning shear flow is a serious complicating factor.

Put simply, shear flow occurs when two fluids — where fluids are a liquid, a gas or a plasma (the amorphous superhot gas that makes up stars like our sun or that occurs in a fusion device) — pass by one another such as when wind flows over a lake or hot gas jets from a galaxy. The turbulent chaos that occurs as a result of the interacting fluids can be exceedingly difficult to recreate in the numerical models scientists use to describe and understand a wide range of phenomena.

Shear, for instance, is a confounding factor for critical applied problems such as predicting the diffusion of smoke from massive wildfires. Smoke from fires such as those that recently occurred in California can be widely dispersed thousands of miles from the source and contribute to problems of air quality.

“These models are really helpful in understanding systems where the flow is fast,” says Adrian Fraser, a University of Wisconsin–Madison graduate student in physics and the lead author of a study published Monday, Dec. 10, in the journal Physics of Plasmas.

But even using the world’s most powerful supercomputers in a show of brute force, certain phenomena are too complex and dynamic to be reliably recreated in silico.

Scientists have tried to get around the problem by simplifying and parsing their models to look at elements of a system in the hope they can be reassembled to account for the whole. But in doing so, Fraser notes, researchers may have overlooked a common collective effect that not only has an influence on the dynamics of a system, but, according to the new research, seems to be a convenient handle for greatly simplifying the digital recreation of phenomena such as the spread of heat and chemicals in a system — problems that now overwhelm even the most powerful supercomputers.

Using those state-of-the-art supercomputers, Fraser’s team, including UW–Madison physics professors Paul Terry and Ellen Zweibel along with MJ Pueschel of the University of Texas, looked at how turbulence plays out over long periods of time when its motions include a component that normally dies away very quickly. Looking at the system in detail, the researchers observed that this seemingly transient component is amplified over time and exerts greater influence than was known.

“This is the one collective motion that had been assumed not to matter in these systems. We showed that it does matter,” says Fraser. “And by noting that, we were able to dramatically improve existing models for how shear-flow turbulence changes in different systems.”

Most previous studies focused on representing motions with components that do not die away because they are instead directly driven by the shear.

“The end result is a simple model that predicts results that are very consistent with the massive simulations we performed.”

Measuring how heat or dye diffuses in a stationary fluid is straightforward, Fraser explains, but “if the fluid is turbulent it is really difficult to figure out how the dye or heat diffuses from one part of the fluid to another part because of all the complicated motions that occur in turbulence.”

By representing the system with both growing and decaying motions, it is easier to see the whole picture and greatly simplify the system for modeling.

“The end result is a simple model that predicts results that are very consistent with the massive simulations we performed,” says Fraser, noting that previously intractable problems for designing fusion experiments, improving weather models, and understanding astrophysical phenomena such as star formation will be more easily addressed without the need for expensive supercomputers.

Vyacheslav Lukin, program director for Plasma Physics and Accelerator Science at the National Science Foundation, says the new study will help the research community continue to resolve complex plasma physics problems. “Further progress in accurately modeling large-scale plasma systems critically depends on our ability to combine analytical methods with high fidelity direct numerical simulations, and these new results should help us to make another step in that direction.”

Partial support for this work was provided by the National Science Foundation under Award No. PHY-1707236, the Wisconsin Alumni Research Foundation, the Vilas Trust, and the U.S. Department of Energy, Office of Science, Fusion Energy Sciences, under Award Nos. DE-FG02-89ER53291 and DE-FG02-04ER-54742. Computing resources were provided by the National Science Foundation through XSEDE computing resources, allocation No. TG-PHY130027.