Cities clamor for new development, with its promise of new housing or economic opportunities. Then comes the unwelcome side effect: congestion.

Popular new attractions or dozens of new apartments mean more travel in the neighborhood. To cope, cities typically require developers to add highway capacity for many new car trips, plus the parking those cars need, or pay a fee so the city can make those improvements in their stead.

The catch is, all those new roads might make things worse. 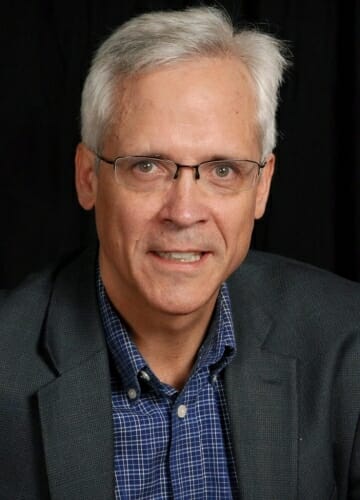 Eric Sundquist advocates reducing the amount of driving that will be generated by new development. Photo: Transportation for America

SSTI and the UW–Madison-based Mayors Innovation Project recently released a new report arguing for a different approach that incentivizes diverse ways to travel to and from new developments. By funding public transportation, limiting parking and preserving the walkability of neighborhoods, Sundquist’s team argues, cities and states can reduce congestion better than if they only plan for cars.

The same solutions can help cities meet their policy goals, such as reduced emissions or more equitable access to services for residents.

“We look at the gap between policy goals on the one hand and the way decisions are being made that actually make things happen in the real world,” says Sundquist. “Often you have great policy goals, and then you have a bunch of rules of thumb that are still basically what was set in the ’50s during the interstate era.”

The report is designed to help cities set requirements for developers on managing the transportation impacts of their projects, using a menu of measures designed to minimize the need for driving. The goal is to promote sound development, reduce regulatory burdens, keep cities livable and avoid gridlock. SSTI calls its approach “modern mitigation.”

“The idea is, let’s first try to reduce the amount of driving that we’re going to generate in the first place before we add supply, and only add supply if we absolutely need to,” says Sundquist.

For example, adding housing as part of a new hospital development could mean fewer car trips by staff, who might choose to live close to work. Another system might subsidize bus passes for employees of a new office park, so those living along bus lines skip the car more often. 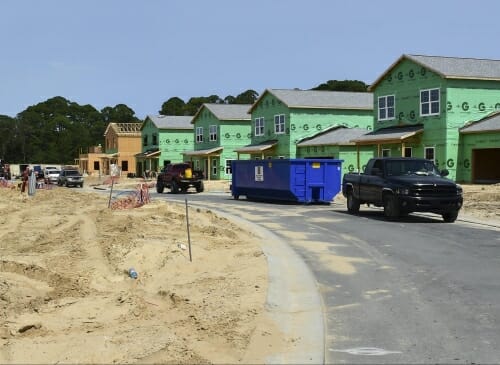 Housing under construction at an Air Force base in Florida. The SSTI study calls for “modern mitigation” of the need for new street capacity by creating transportation alternatives. Photo: U.S. Air Force

Employers have long adopted such demand-reduction methods to ease rush hour. In recent years, some cities have begun codifying similar mitigation rules to promote fewer and shorter car trips, especially those taken by a solo driver.

The core of SSTI’s proposal has developers propose a set of measures to reduce the demand for solo car trips depending on the size and other characteristics of their planned project. Cities then agree to the set of measures, make sure they work as intended and, if need be, enforce any penalties for noncompliance.

Shifting from conventional mitigation to modern mitigation may not require changes to laws in many municipalities, says Sundquist, who served on the Madison Plan Commission for seven years. The guidance given by such committees to developers is often a codified set of policies, rather than laws, with considerable flexibility.

Perhaps harder, Sundquist says, is shifting the focus away from adding roads toward reducing the need for those roads. Car-centric policies have been in place for a half-century or more and have in many cases made alternative policies harder to implement. The first step, he says, is to change course.

“We’re dealing with problems set in motion decades ago. “When you’re in a hole, quit digging.