Student group promotes usefulness of philosophy in the community 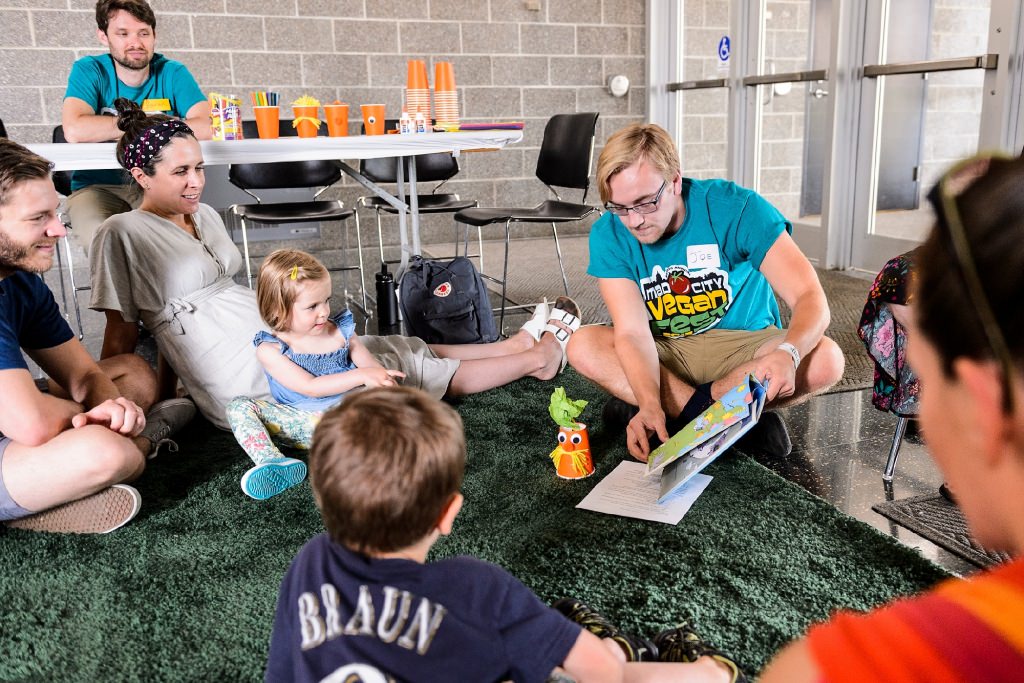 Joe Venuta drops to the floor in front of a half-dozen children and softly pats the top of his head.

“Let’s all check that we’ve got our thinking caps on,” the UW–Madison junior tells them.

As the kids mimic his head-patting, Venuta prepares to administer a pint-sized dose of some very big ideas.

Venuta is a member of Madison Public Philosophy, a new group of UW–Madison students that takes philosophy out of the classroom and into the community. On this day, the group is offering free sessions for children at the annual Mad City Vegan Fest at the Alliant Energy Center in Madison.

The children have just been read “The Lorax” by Dr. Seuss. Venuta talks about the “truffula trees” in the book and asks more generally why trees are important.

“That’s right, they produce fruit, and that’s called an instrumental value,” Venuta says, explaining that we value trees because they produce things we can use, just like we use instruments. Then he introduces the concept of intrinsic value, or liking something simply for its own sake. 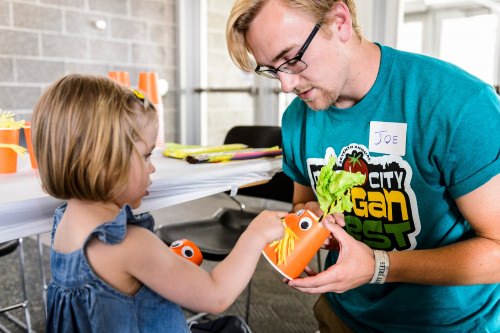 Teaching philosophy to children is one of the group’s two core components, in addition to presenting dramatizations of famous philosophy thought experiments.

“We believe that no matter what you’re doing, philosophy can help you do it better,” says Aaron Yarmel, the group’s executive director and co-founder with fellow graduate student Katie Petrik.

The group started last fall and has about 10 core members. Yarmel, from Rochester, New York, traces its origins to buying a house two years ago in a Madison neighborhood beset by gun violence and drug dealing.

“My response was to think of ways to strengthen the community,” he says. “I knew I wanted to help the children who were being disproportionately affected by the rise in crime around them, and I knew I wanted the process to be a collaborative one with community partners.”

Yarmel turned to philosophy, a discipline that greatly impressed him as an undergraduate at Eastman School of Music in Rochester. He was studying violin performance and took a philosophy of science course.

“The things we did in that class seemed more interesting than anything I’d ever seen, and I had this sense that the tools we were learning would be crucial to addressing my own questions about life,” he says. 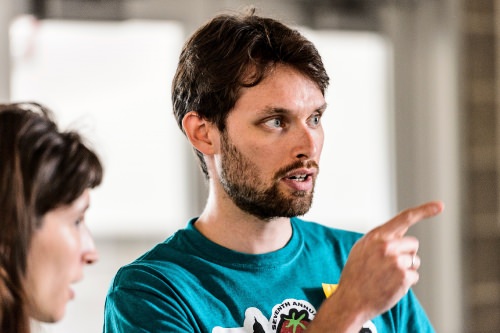 Aaron Yarmel and the Madison Public Philosophy group are bringing philosophy out of the classroom and into the community. Photo: Jeff Miller

Yarmel completed his bachelor’s degree in music, then earned a master’s degree in the philosophy of science from the London School of Economics and Political Science. He is working on a Ph.D. in philosophy at UW–Madison, where he connected with Petrik, also a philosophy doctoral student. (Yarmel’s professional music career continues. He performs as a substitute violinist with the Madison Symphony Orchestra and teaches private violin lessons.)

Petrik, from Floyds Knobs, Indiana, brought to the group her experience with the Philosophy for Children movement, which works to strengthen the ability of young children to critically engage profound issues. She earned a master’s degree in early childhood education from the University of Nevada, Las Vegas. While getting a second master’s degree in philosophy from Texas A&M University, she learned about Philosophy for Children from Professor Claire Katz, who had studied with the movement’s founders.

The movement’s curriculum traditionally follows a “community of inquiry” model, where students work together to generate and analyze substantial questions, Petrik says. The Madison group uses the curriculum as a general framework, then often develops its own lesson plans, usually involving a hands-on activity. The children at Vegan Fest made a truffula tree atop a mini-Lorax using paper cups, pipe cleaners and tissue paper.

“We believe that no matter what you’re doing, philosophy can help you do it better.”

“A major part of our role is getting them to question and discuss the intuitions they already have about things like fairness, happiness and logic,” says Venuta, a philosophy and strategic communications major from Madison.

For one lesson, Yarmel had children ponder, “What is art?” Students drew one picture they considered art and one they did not, then discussed what differentiated the two.

“A major part of our role is getting them to question and discuss the intuitions they already have about things like fairness, happiness and logic.”

About 35 people attended the performance at the Arts + Literature Laboratory in Madison’s Schenk-Atwood neighborhood.

“During the discussion afterward, we explored whether there was any plausible principle whereby you had a moral obligation to save the child in the first scene but not in the final scene,” Yarmel says. “What we saw was a real hunger for engaging in philosophical discussions.”

The group plans to continue its work this coming academic year and is completing paperwork to become a nonprofit organization.

“We hope to spread the word about how useful studying philosophy can be, how rich and varied the discipline is, and what valuable contributions philosophy majors are poised to make,” Petrik says.