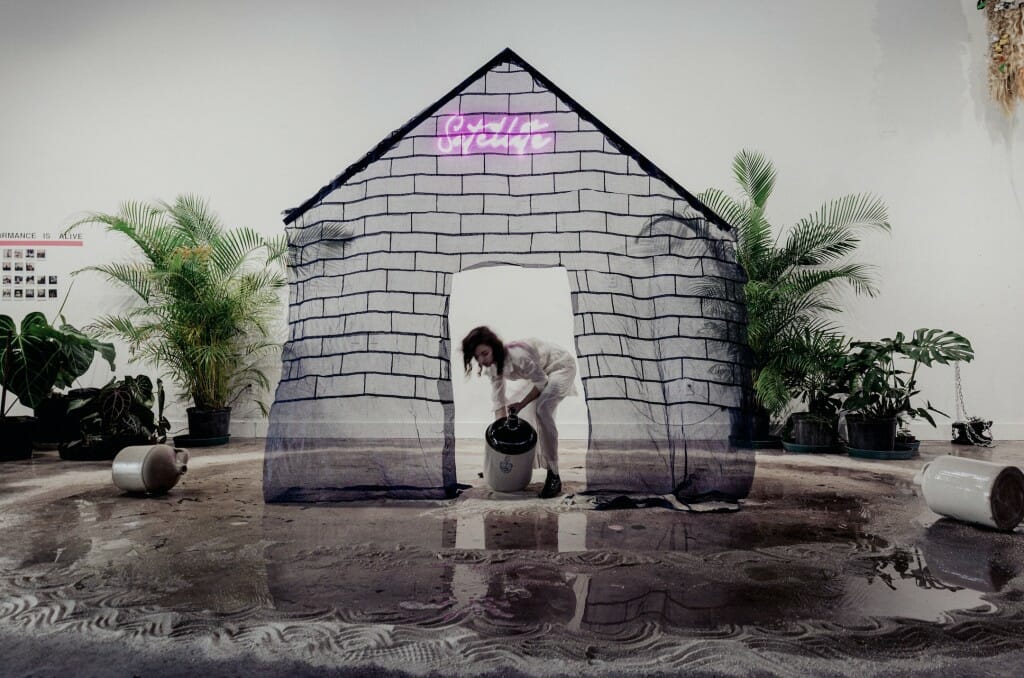 Caitlin Mary Margarett performs “for the love of god.”

How can art be used to tell a story and spread awareness? What are the ways art can be utilized to share accounts of people’s lives and elevate those lesser-known, powerful stories?

Caitlin Mary Margarett, or CMM, is a first-year MFA student in the School of Education’s Art Department, focusing on 4D video and performance art. She recently performed her latest performance art piece titled, “for the love of god,” at Miami Art Week.

In her work, CMM often focuses on the relationship between memory and space. “My work deals a lot with place and memory,” CMM said, “and how our sense of memory and connection to place is often skewed by ideas that we have given to that place in a contemporary way.” 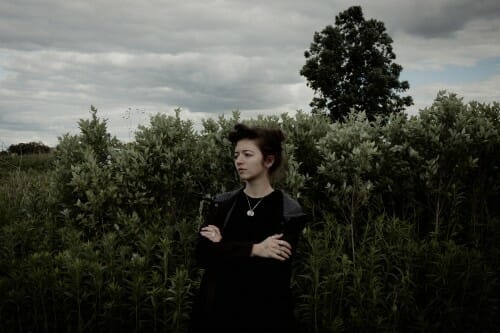 “For the love of god,” comes from CMM’s personal connection to her home state of Iowa, and is a response to the 2020 derecho that swept through and devastated much of Iowa.  A derecho is a long-lasting and widespread line of severe storms, associated with a band of rapidly moving showers or thunderstorms.

“It was basically a land hurricane [but] comes through much stronger and has higher wind,” CMM said. “We lost 7 million trees across the state… and 93% of the homes in the city I was living in had moderate to severe damage. That happened within a 3 hour period of time.”

CMM also spoke about her experience presenting her piece during Miami Art Week.

“The audience was mostly people who had also come to perform… but there were also people coming in who have no semblance to what performance is [and] were just watching me shout and flood the gallery,” she said, “it was really interesting to be able to have different folks experience that work, and no one was confused as to what I was doing.”

In developing her piece, CMM gave serious consideration to how the concepts of both place and memory relate to climate change.

“It’s in our power to [work] to stop the accelerated curve of the storms, especially when we think about why we are connected to the places that we are,” she said. Currently, CMM is tracing the lineage of her family’s immigration from Denmark to Iowa.

CMM used various mediums in her performance piece, including audio, visual, and scent. “I have a lot of audio that played from news coverage of the storm coming in and sweeping across the state,” she added.

CMM said she did this to allow people to connect to her work differently. “I try to use multiple mediums so that people can have different access points,” she said, “it makes folks feel not alone because they’re able to synthesize that information [in different ways.]”

By using her art to tell the story of the devastation of the Derecho in her home state, CMM works to spotlight how climate change is not some distant news story happening elsewhere; it is personal and affects communities everywhere. These stories need to be told.

While news stories about the uptick in extreme weather are frequent, CMM notes that it is far less common to hear about superstorms causing devastation in the Midwest.

“I think these events need to be elevated,” CMM said, “not just because of what damage is being left behind, but because the climate crisis is happening now, and you can’t deny that when you look around and see this level of destruction.”