In an early March email promoting his upcoming master of fine arts (MFA) show, the magnitude of the exhibition to UW–Madison graduate student Guzzo Pinc was clear.

“Of all the events I’ve put on over the past years this one means the most to me,” Pinc wrote to fellow students, faculty, and staff within the Art Department, and his friends, family, and fans of his artwork. “It represents the culmination of three years of work in the UW–Madison graduate painting program. I’ve never had a chance to really dedicate myself to my art without also having to split my time with full-time jobs. This show represents what I can do at my best. … I would love for you to celebrate this important evening with me.” 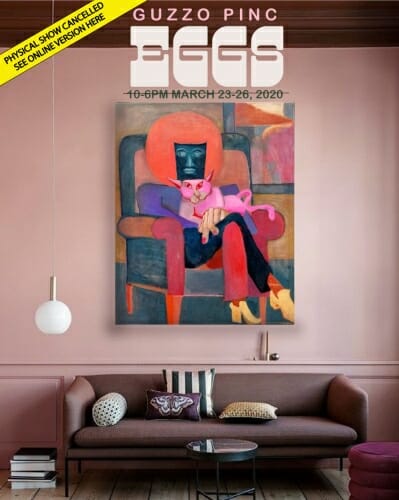 Guzzo Pinc’s MFA show joined the long list of events canceled due to COVID-19. Despite the initial shock and a feeling of despair, Pinc became determined to bring his exhibition — “EGGS: A Grand Scale Painting Comedy” — into public view.

A few days later on March 11, due to growing public health concerns about COVID-19, the university announced that when spring break was over, there would be no face-to-face classes through at least April 10, with instruction moving to alternate delivery modes. The situation quickly spiraled from there. Less than a week later, face-to-face classes at UW–Madison were halted through the spring semester, significant limitations were put on public gatherings, and “social distancing” was now a common term.

Just like that, Pinc’s MFA show — scheduled for March 25 in Gallery 7 of the Humanities Building — joined the long list of canceled, in-person events due to the COVID-19 pandemic. He sent an email to his followers to share the sad news.

“I had built this up to be such a big thing and then it just collapsed before everyone’s eyes via my emails,” says Pinc, who has made more than 300 paintings during his MFA coursework, with his show representing the “conclusions,” the findings, and the very best of his work.

Despite the initial shock and a feeling of “despair,” Pinc became determined to find a way to bring his exhibition — “EGGS: A Grand Scale Painting Comedy” — into public view.

“It felt like I was on mile 24 of a marathon and I was completely determined to finish despite gigantic cramping,” he says.

“While we have all had to make sudden and drastic changes in a very short period of time, our graduate students in the Art Department have had to rethink the very way they interact with the world, their peers, and with their own creative practices quite literally overnight,” says Professor Doug Rosenberg, chair of the Art Department.

On March 25, Pinc launched his exhibition online — on the homepage of his website.

The online exhibition features photos of Pinc’s paintings taken in various spots in and around Fort Atkinson, Wisconsin, located about 35 miles southeast of Madison. Pinc and his wife, Cynthia, drove around with the paintings and photographed them.

“You will see her feet in all of these photos because we just got out of our truck, she grabbed a painting, held it up, and I shot some photos,” says Pinc. “Now, the whole town of Fort Atkinson is my gallery.”

“Guzzo met the challenges of flipping the traditional MFA exhibition into one that conforms to the ‘new normal’ with particular enthusiasm,” says Rosenberg. “While it may not have been his original vision, as a byproduct of social distancing, he created an amazing alternative MFA exhibition that features a series of photos of his paintings in public space. His new work is so distilled and playful that it seems perfectly suited to someone carrying them through the streets of his hometown in a kind of mobile and site-specific exhibition. There’s a real sense of joy in the images he created. While it wasn’t what he expected as his MFA show, it is a door he may not have thought to open otherwise.”

Most of Pinc’s artwork is oil paint on canvas. He explains how his work pushes the boundaries of traditional painting by bringing in influences from graffiti — but also from comedy; things like Mel Brooks movies or the sitcom “It’s Always Sunny in Philadelphia.” He describes the works in his show as “grand scale comedy.” 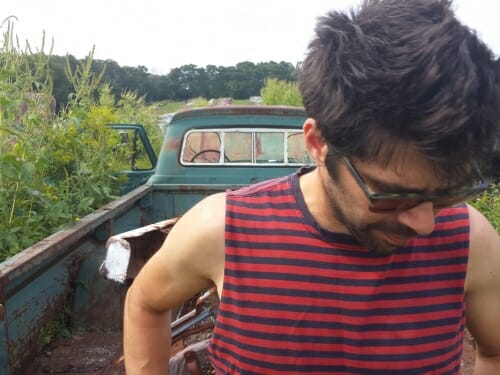 “It felt like I was on mile 24 of a marathon and I was completely determined to finish despite gigantic cramping,” Pinc says. Courtesy of Guzzo Pinc

“It is funny but also sophisticated,” says Pinc. “I hope that my paintings can serve as entertainment and also intellectual nourishment. …  I hope people all take away something different from the work and that the artwork can enrich their lives. I see my artwork as an affirmation of being alive and a celebration of life amidst the hardships we all face.”

If there is such a thing as a traditional route to earning an MFA from the School of Education’s Art Department, Pinc didn’t take it. He spent much of his childhood growing up in Oak Park, Illinois, and moved to Fort Atkinson about 15 years ago to take care of his grandfather. He liked the town so much, he stayed.

Pinc says he has painted for himself and for friends for about 25 years. Cynthia convinced him to push out his work using social media about five years ago. Pinc followed UW–Madison’s T.L. Solien, a professor of painting and drawing with the Art Department, on Instagram and the two visited each other’s studio. Solien remembers that visit to Fort Atkinson well.

“His studio was in an expanded residential garage, and was literally packed with paintings made on pieces of plywood-like material,” says Solien. “They were stacked 10 deep along a 20-foot wall, and every other available space contained a painting in progress. It was crazy interesting and we had a great conversation. I thought at that time Guzzo was a gifted and unique artist.”

“I actually knew of T.L. because one of his paintings hangs in the library in Oak Park where I grew up, and it made a big impression on me as a kid,” says Pinc. “When T.L. visited me, he put the idea in my head that people might actually like my paintings in a more serious setting.”

Pinc later visited Solien’s studio in the Art Lofts and began talking about the MFA program. Nancy Mladenoff, a professor emeritus with the Art Department, also pushed Pinc — who was working as a bike mechanic at the time — to apply to the MFA program.

“Working with Guzzo over the last three years has been one of the highlights of my 30-year teaching career, and helping to bring Guzzo into the UW–Madison Art Department’s graduate program is one of the best contributions to our graduate program I’ve ever made.”

After such a winding journey, Pinc was understandably heartbroken initially by the lost opportunity for an in-person MFA show. Today, however, he is surprisingly upbeat with how everything has played out.

“I do feel pretty positive about it now,” he says. “I have been thinking that the way people see art is changing anyways. Galleries and museums are now only a small part of the equation. Most of the art I look at is through books or online, for better or worse. This experience has just strengthened an already growing conviction that artists have to find new avenues of connection to fit the contemporary world. I think more people are going to see my artwork online now than they would have if things would have all gone as planned.”

He adds: “But I do very much hope they can all see it in person someday.”