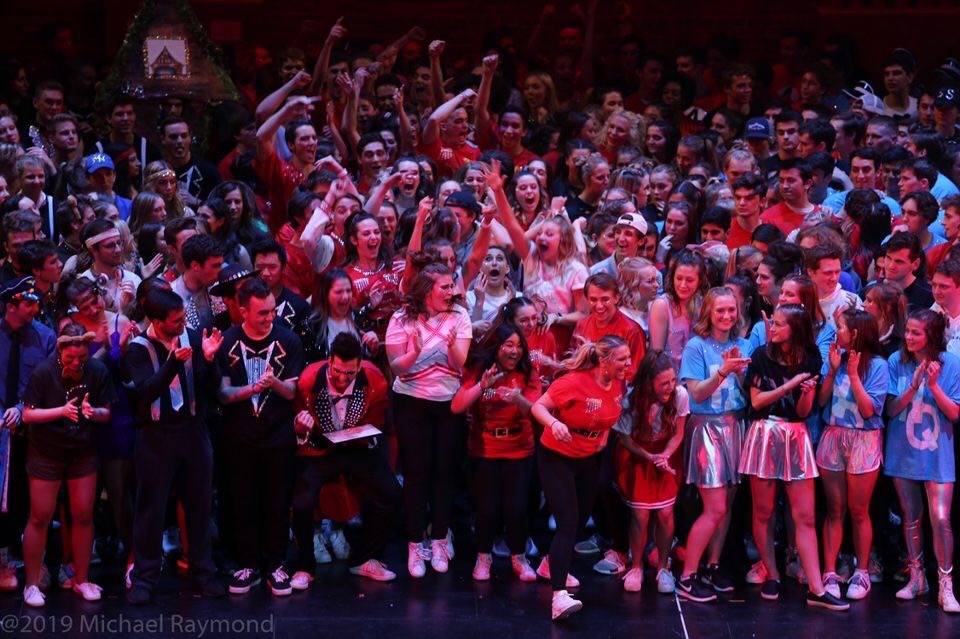 More than 800 students — many from campus fraternities and sororities — donate their time and talent to produce an annual musical comedy show that raises money for local and national charities. The 2019 show, pictured above, was titled “From the Ground Up.” Photo by Michael Raymond

A student-run philanthropic organization at the University of Wisconsin–Madison has donated more than $340,000 to charity despite having to cancel its spring variety show — the driving force behind its annual fundraising efforts — due to COVID-19.

Students with the group Humorology say the coronavirus pandemic only heightened their fundraising resolve. Even before the crisis hit, the students had decided to donate any money raised during the 2019-20 academic year to Blessings in a Backpack, a national nonprofit organization that works to feed children who might otherwise go hungry. That mission became even more critical as the economy suffered, says Kaylee Cunningham, Humorology’s philanthropy chair.

“We kept thinking about the kids who would be going hungry, especially with schools closing,” says Cunningham, of Naperville, Illinois, who graduated in May with a bachelor’s degree in mathematics. “I think that’s a big factor why we didn’t slow down and wanted to raise as much money as we could.”

Since 1948, Humorology has produced an elaborate campus variety show that is written, directed, choreographed and performed by over 800 students each year. Nine casts audition in the fall for six spots in the spring show — all while simultaneously fundraising for a charity of the group’s choice. Most of the students are members of fraternities and sororities, though anyone is welcome. 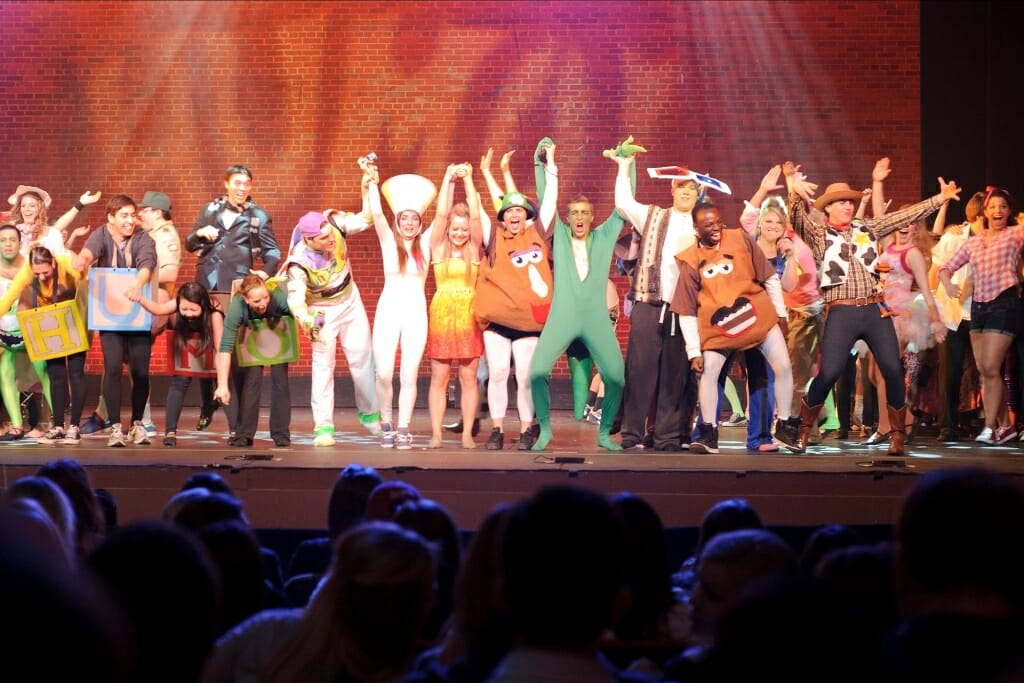 Cast members fill the stage for a final bow following the performance of six mini-musicals featured during Humorology at the Wisconsin Union Theater in 2011. With no live performance this year, Humorology students found other ways to raise money for charity. Photo: Jeff Miller

Humorology has a long history of raising large sums of money. It donated $195,000 to the Rainbow Project in 2017, $235,000 to Neighborhood House in 2018, and $405,000 to the Badger Childhood Cancer Network last year. This year, the students sought to bring attention to childhood hunger while raising enough money to start the first Blessings in a Backpack program in Madison. The nonprofit focuses on feeding children on weekends when schools are closed.

“It costs as little as $4 to feed a child for a weekend with Blessings in a Backpack,” says Zoe Devorkin, program marketing manager for the national organization, based in Louisville, Kentucky. “So these students are truly making an incredible lasting impact on the Madison community for years to come.”

Blessings in a Backpack is partnering with the Madison School District to undertake the effort. Due to COVID-19 and the increased need, some of the Humorology money already is being used to add food at district meal distribution sites during these final weeks of the school year. The effort to distribute food in backpacks is expected to gear up in earnest this fall.

This year’s three-night Humorology show was scheduled for April 16-18 in Shannon Hall at Memorial Union. The group’s executive board canceled the production in early March, just before tickets went on sale.

“The casts were heartbreakingly close to being done with their shows, so it was a huge disappointment,” says Lilly Fisher, the group’s outreach chair. “It was a very difficult decision, but the right one.”

Cast members continued raising money even after the show was canceled and ultimately surpassed the pre-pandemic goal.

Humorology was able to raise so much money anyway because of the way it is structured. Fundraising has always been the group’s core mission, and the effort goes on all year. It began last fall, when each cast was given a goal of raising at least $18,000 during the audition process. Teams raise the money in a variety of ways, such as social media campaigns and pairing with local businesses and restaurants on Humorology-related sales events.

Fundraising also determines the winner of the variety show. While the three finalists are chosen based solely on artistic merit, top honors go to whichever team of the three has raised the most money.

“People get really, really competitive as we reach the final show because everyone wants to be in that final three and win,” says Fisher, of Weston, Connecticut, who graduated in May with a bachelor’s degree in political science. “It’s a huge driving factor.”

Without the motivating factor of the show, the leaders of Humorology knew fundraising might take a bit of a hit. But they also knew that students were heavily invested in supporting Blessings in a Backpack. Cast members continued raising money even after the show was canceled and ultimately brought in $341,000, topping the pre-pandemic goal of $300,000. (Ticket sales typically cover the costs of mounting the production, so financially, canceling the show was a wash in that regard.)

Students presented the check to Blessings in a Backpack virtually during a live Instagram ceremony. On April 18, the final night of what would have been the show’s three-night run, more than 150 students logged into a live cast party on Zoom.

“We had a really great night together,” Fisher says. “It was a night when we saw Humorology for more than just its flashy show. When you strip it all down, the one consistent thing about Humorology over the decades has been that it’s a philanthropic organization. We’re more than just a show. The pandemic couldn’t change that.”

During the Zoom gathering, the award for “Most Philanthropic Team” was presented to the cast made up of members from the sororities Chi Omega and Sigma Delta Tau and the fraternities Zeta Beta Tau and Delta Chi. The team topped the fundraising effort, raising $72,650.

Note: Students from the Humorology executive board are available for on-camera interviews.