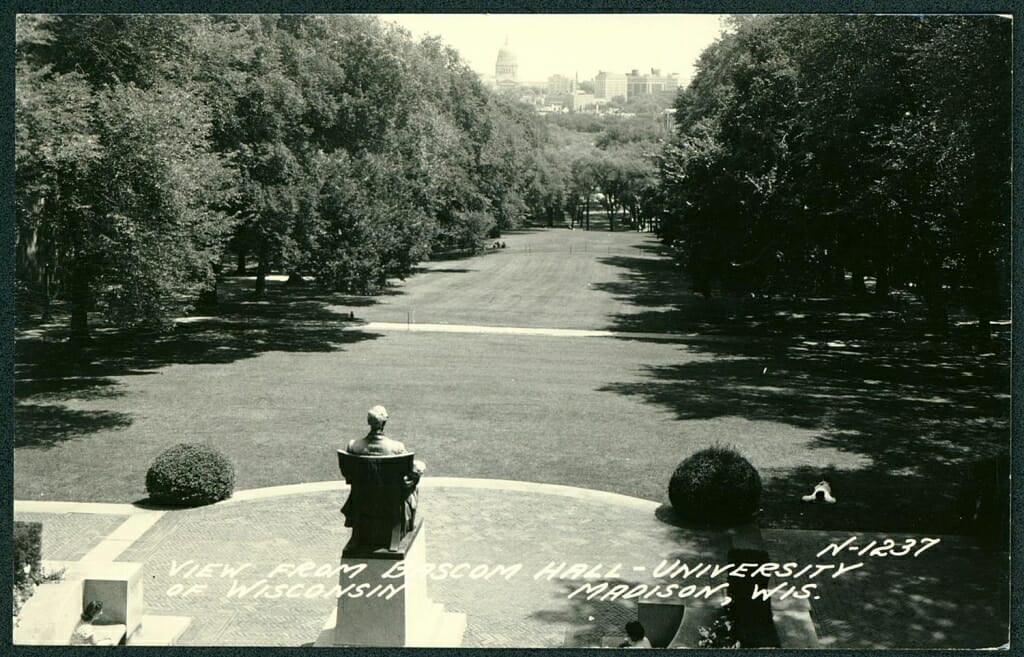 Abe surveys downtown Madison and the state Capitol from his perch atop Bascom Hill. UW Archives

Bascom Hill looks a little bit different at the moment than it did at the end of spring semester. But there’s a good reason for the fences and detours. 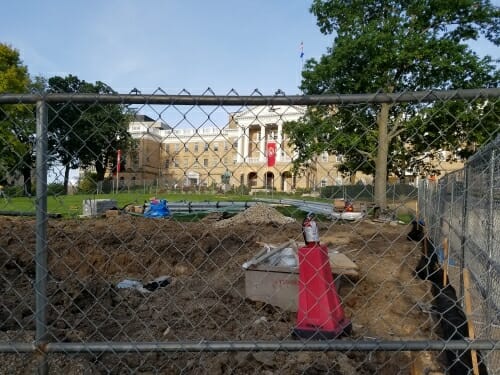 The Bascom Hill portion of the Bascom-Lathrop project as seen on Aug. 30. “We’re going to unzip Bascom Hill, replace all the utilities and put it back together,” says Jeffrey A. Pollei of UW–Madison Facilities Planning & Management. Staff photo

Crews are busy replacing underground utilities, some of which date back to the 1890s. While UW–Madison is a campus with a great appreciation for history, that’s a little too historic.

“We’re going to unzip Bascom Hill, replace all the utilities and put it back together,” says Jeffrey A. Pollei, director of utilities and energy management in UW–Madison Facilities Planning & Management.

The project will be done in three phases and is scheduled for completion in December 2020. It will replace, relocate and construct new thermal utilities (steam, condensate and chilled water), electrical utilities (primary electric and signal communications) and municipal utilities (domestic water, sanitary sewer and storm sewer). 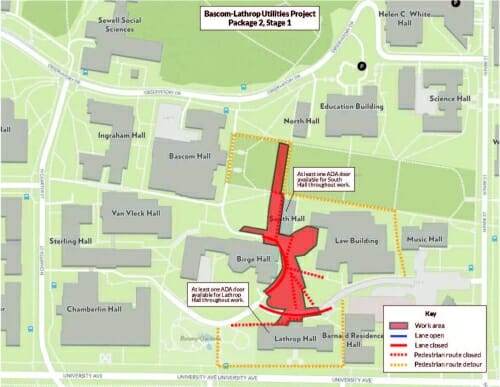 Sidewalk and driveway closures and detours during the current stage of the Bascom-Lathrop Utilities Project (click to enlarge). The work area from the top of Bascom Hill to the back of Lathrop Hall is shaded red. UW–Madison Facilities Planning & Management

The work spans two parts of the Bascom Hill area between North Charter Street and Music Hall along Lathrop Drive and between Bascom Hall and North Park Street north to Observatory Drive. Utilities in this area serve all of the buildings along Bascom Hill but are also an essential part of the utility loop that connects campus both east and west of the hill. The latest update includes maps of the affected locations.

How well do you know Bascom Hill? Here are five things to think about during your next trudge up its famously steep incline: 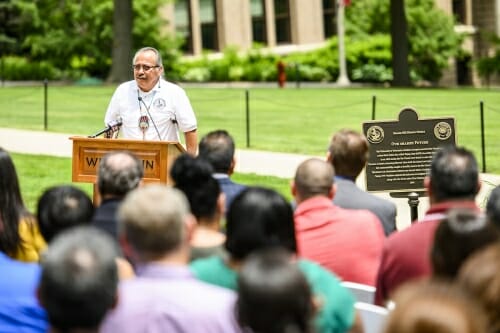 It is ancestral Ho-Chunk land, a place their nation has called Teejop (day-JOPE) since time immemorial. In an 1832 treaty, the Ho-Chunk were forced to cede this territory. In June 2019, the university and the Ho-Chunk Nation dedicated a plaque acknowledging this history. The marker will travel to different locations around campus during the 2019-20 academic year to increase its visibility and to begin incorporating it into the educational life of the university. 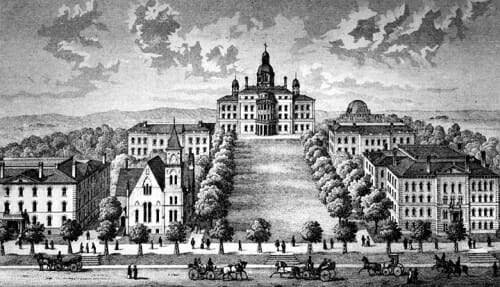 Illustration circa 1879–1884 of Bascom Hill – or College Hill, as it was known back then. UW Archives

The steepness was a selling point. As told by the Wisconsin Alumni Association: “According to a report by the Board of Regents in 1848, a committee examined several locations and found it to be the most suitable, sitting only one mile west of the state Capitol, and elevated enough to oversee the village of Madison, the four lakes and the surrounding countryside. As described in the Oct. 10, 1848, issue of the Wisconsin Argus newspaper: ‘It affords one of the most enchanting views which can be found in the state.’”

And exactly how steep is it? WAA says: “The change in elevation of Bascom Hill from the Park Street sidewalk to the base of the Lincoln statue is 86 feet. The hill is 850 feet long, resulting in a slope of approximately 10 percent, or 5.8 degrees.” That’s the perfect slope for athletes training to maximize acute sprinting speed, according to a study. On your mark … 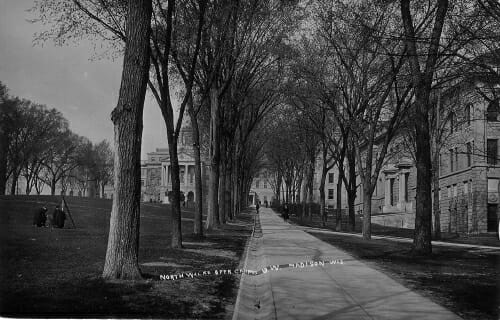 It wasn’t always called Bascom Hill, and Bascom Hall wasn’t always called Bascom Hall. They used to be known as College Hill and Main Hall or University Hall. That changed on June 22, 1920, when the building was officially dedicated as Bascom Hall, thanks to the efforts of Florence Bascom. She had requested that a university building be named for her father, John Bascom, the university president from 1874 to 1887. While never formally designated, College Hill gradually became known as Bascom Hill. 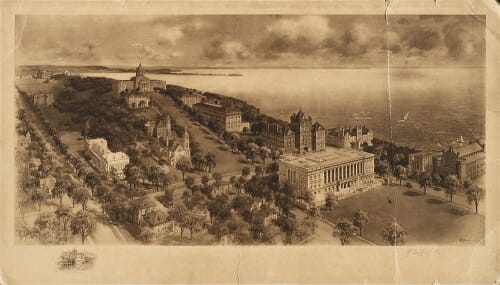 The hill is on the National Register of Historic Places. Known as the Bascom Hill Historic District, it was officially recognized Sept. 12, 1974, for its significance in the areas of architecture, art, communications, conservation, education, music and politics. The district includes the area bounded by Observatory Drive, University Avenue, North Park Street, Langdon and State Street — 460 acres and 14 buildings. It was described as the “most historic cluster of institutional buildings in Wisconsin … a sensitive mix of urban and natural spaces comprising a memorable and coherent whole significant in itself. The buildings themselves are of major statewide significance, but together in their interrelationships and their relation to ‘College Hill’ and Madison’s natural environment they become part of the greater identity that is the Bascom Hill Historic District.”

You could once mail it. In 1999, the United States Postal Service issued a pre-stamped postal card depicting an 1879 rendering of Bascom Hill and its surrounding buildings. The 20-cent card was part of the Historic Preservation series and helped commemorate 150 years of study at the university. Postmaster General William Henderson noted the institution’s “beautiful architecture and dedication to higher learning.” Six million of the cards were printed.