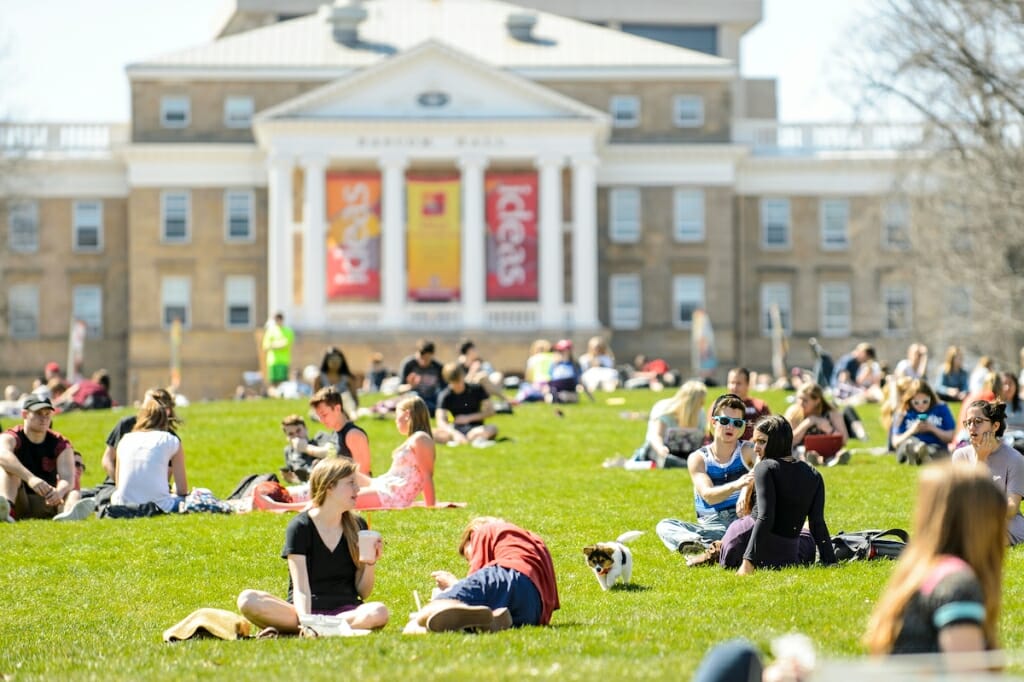 Students lounge on Bascom Hill in April 2016. Beneath the hill are antiquated utility lines, some of which date back to the 1890s. Photo: Bryce Richter

Bascom Hill is getting a makeover — or more like a makeunder. Beneath that pristine hill, which you dread climbing up but love taking selfies on, are antiquated utility lines, some of which date back to the 1890s.

While UW–Madison is a campus with a great appreciation for history, that’s a little too historic. Abe will oversee the project, which will begin later this month and last until December 2020.

“We’re going to unzip Bascom Hill, replace all the utilities and put it back together,” says Jeffrey A. Pollei, director of utilities and energy management in UW–Madison Facilities Planning & Management.

Utilities in this area serve all of the buildings along Bascom Hill but are also an essential part of the utility loop that connects campus both east and west of the hill.

“We expect the lights to come on when the switch is flipped or hot water to come out of the faucet without really thinking about it,” Pollei says. “We don’t think about utilities when they work. But when they don’t, you quickly develop a deep appreciation.”

The chilled water lines in this area have been problematic for many years, with six failures over the last decade. Failures can result in the loss of tens of thousands of gallons of chilled water and require the shutdown of air conditioning in several buildings. The Bascom Hill steam tunnels are the oldest and narrowest on campus, difficult and dangerous to access, and present a high risk for failure, which is both inconvenient and costly.

The majority of the water, storm sewer and sanitary sewer piping in this area is at least 50 years old, with many piping segments more than 110 years old. 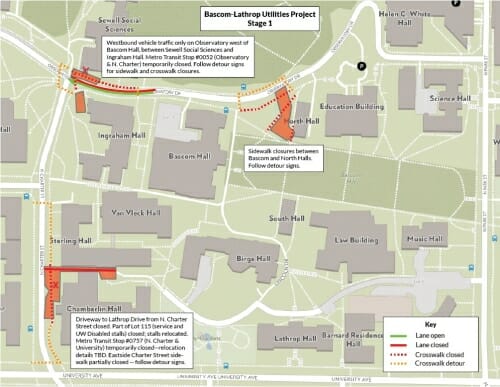 If it seems like that’s a long time for something to last, it is. While not uncommon, it’s definitely time for updating, Pollei says. “It’s been at the end of its useful life for many years.”

Grounds crews, landscape architects and arborists are all being consulted to keep impact to the hill at a minimum. Only a few trees are being taken down along the hill, and that’s because of distress, not the project, Pollei says.

Upon completion of the utility systems, all areas disturbed by the project will be fully restored, including roadways, gutters, sidewalks, the lawn and landscaping features, and site structures.

The goal is to have the sidewalks on both sides of Bascom Hill open the majority of the time during the work, but there will always will be at least one sidewalk open allowing access, Pollei says.

The work is part of the 2015 Master Plan, which prioritizes infrastructure. Campus master plans are required under Wisconsin state statutes through the State Building Commission and by UW System Board of Regents policies. UW–Madison is required under the City of Madison zoning code to have an approved campus master plan.

“It’s been an idea for 15 years that it’s finally time to do,” Pollei says.

The entire project will be done in three phases and is scheduled for completion in December 2020. The second phase will run July through March 2020 and involves boring and digging new tunnels. The third will run April 2020 through December 2020 and include open pit excavation where the slope is too steep for boring.

Yes, it will be a bit noisy but Pollei says it’s essential to do this work to avoid any interruption of service caused by the old utility lines failing.

“Our hope is that we’re not back for another 100 years,” Pollei says. “That’s the intent.”

Another project focusing on the Lathrop Drive corridor from Park to Charter streets is currently under review by the State for the 2019-21 biennium.

Updates will be posted as the project proceeds.