More than 200,000 unique items, many of them shoes, are stored in Foot Locker’s 10-acre warehouse outside Wausau. Craig Wild

Nearby, in downtown Wausau, an old strip mall hides one of Wisconsin’s most sophisticated e-commerce systems, dedicated to selling those shoes online.

It’s an operation that’s had significant help from the University of Wisconsin–Madison.

The developers of Foot Locker’s lightning-fast web presence work in Wausau, because that central Wisconsin city is the home of Eastbay, a large retailer of athletic gear purchased by Foot Locker, Inc. in 1997. 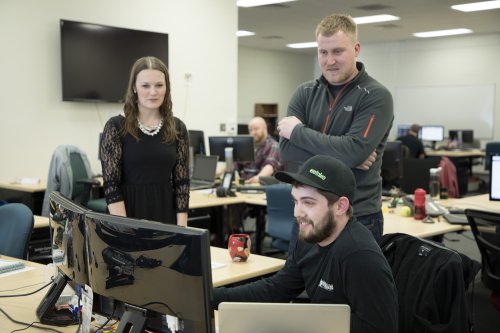 Central Wisconsin is better known for producing paper than for high-intensity digital commerce, and one key to creating the necessary systems is participation in the University of Wisconsin–Madison’s E-Business Consortium.

Using the technical expertise in Wausau, Foot Locker sells nearly a billion dollars’ worth of gear online annually — including a bewildering array of sneakers — to athletes and “sneakerheads” – fans who scan listings of “launches” for the latest, greatest adornments for active feet.

Foot Locker describes itself as “the leading global retailer of athletically-inspired shoes and apparel.”

The E-Business Consortium has more than 65 members, including Rockwell Automation, Lands’ End and American Family Insurance. The consortium offers a multiplicity of help to members, through collaborative learning in peer groups, executive retreats, student projects and special-interest groups. 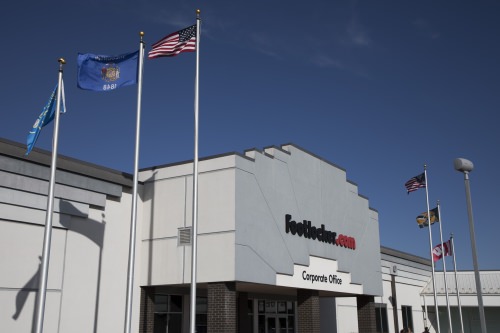 Foot Locker has been an enthusiastic participant since the beginning, says Bob Stephan, vice-president of marketing. “The biggest benefit is the breadth of UWEBC, so we’ve seen benefits in nearly all functional areas. There is also an overarching benefit from being exposed to our peers in other companies and other industries. We try to help each other solve problems, identify emerging trends and build relationships that are helpful over the long term.”

Stephan, who chairs UWEBC’s advisory board, says fellow Consortium members have “helped us assess the value of the contributions from various sales channels, including brick-and-mortar stores and mobile devices, identified software that has worked for them, and recommended a technique or way of thinking that was helpful to us.”

Even as e-business encroaches on a growing portion of brick-and-mortar retail, the field is being transformed by a welter of social, economic and technological trends, says Stephan. To take two obvious examples, search and sales are quickly moving to smartphones, and customers are increasingly influenced by social media. Both trends cause adaptations that echo through the corporation’s digital architecture.

With some advice from the Consortium and elsewhere, Foot Locker has adopted the “agile” approach for website design and maintenance. In the a 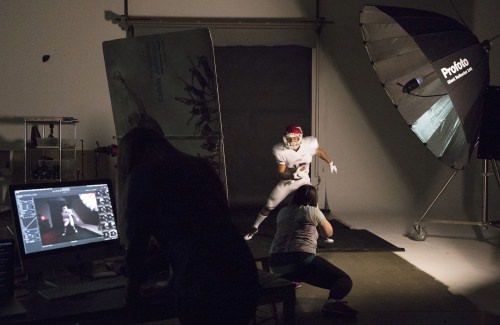 A stobe captures the action in Foot Lockers photo studio at its Wausau offices. Craig Wild

gile system, groups of about 10 people tweak and upgrade software, working in highly orchestrated, two-week “sprints.” Each development team is led by a “scrum master,” like John Hocker. “The idea of ‘scrum’ comes from rugby,” he says, where it refers to the player formations that struggle against other when play is restarted.

Agile software development is a growing trend in the software industry, says Cavinda Caldera, the IT practice director at the UW E-Business Consortium. “The philosophy is that instead of having the programmers doing their own thing, there are continuous discussions and engagement with the business client. They break projects down into two-week sprints, so if the business or technical requirements change, the client can provide advice immediately.”

“Because technology has been evolving so rapidly, in so many different ways, Foot Locker’s involvement in UWEBC has been of significant value,” says Raj Veeramani, a professor of industrial and systems engineering at UW–Madison, and founder and director of the consortium. “It’s helped them to stay on the forefront of technology, helped them learn what works, what doesn’t, and what’s next.”

Technology wasn’t quite that advanced in 1980, when Art Juedes and Rick Gering began selling athletic shoes to high-school coaches out of the trunk of a car in Wausau, and started Eastbay.

The Foot Locker company’s history is also entwined with a retailing legend: the variety-store giant F.W. Woolworth Corp., which purchased Eastbay in 1997, the same year it closed its last variety store. Woolworth changed its name to Foot Locker, Inc. in 2001.

The constancy of change that is evident at Foot Locker was noted by the Greek philosopher Heraclitus 2,500 years ago, who wrote, “You can never step twice in the same river.”

That wisdom applies to modern retailing, caught between online and stores, and buffeted by turbulence in social media. The profitable specialty retailer of the future “has to be a fast-change technological expert with a finger on the pulse of fashion and performance,” says Stephan. “There are many dimensions to this model, and you have to nail every one to succeed; and UWEBC has provided us with world-class expertise and deep insight that you might not expect to exist around the corner in Central Wisconsin.”

Indeed, a Wisconsin attitude helps explain to the Consortium’s success, says Ross McCullion, who leads the department responsible for ensuring that Foot Locker’s wares appear near the top of web searches.  “UWEBC is an open, safe place, it’s a Wisconsin place where we get together and share, and it’s sponsored by a neutral party,” McCullion says. “If I go to a summit in Silicon Valley, vendors are going to want to sell me a product. Maybe it‘s awesome, but maybe it’s not. UWEBC is enhancing the business environment in the State of Wisconsin. I can’t overstate how different and helpful it is.”