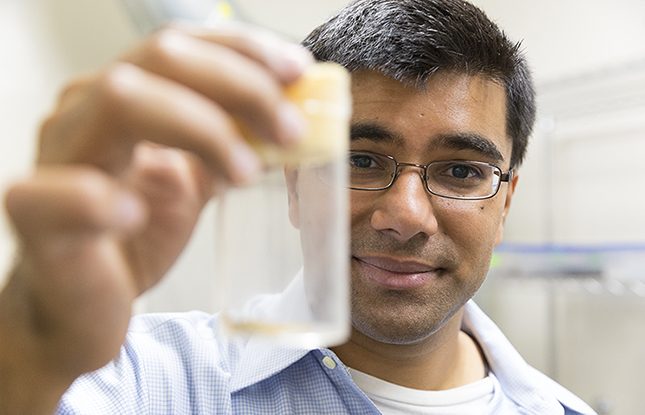 Prashant Sharma displays a scorpion in a container. Submitted photo

Despite their reputation as living fossils, scorpions have remained evolutionarily nimble — especially in developing venom to fend off the rise of mammal predators. A new genetic analysis of scorpions’ toxin-making reveals recent evolutionary steps and may actually be a boon for researchers studying scorpion venom’s benefits to human health.

An international team of researchers led by University of Wisconsin–Madison biologists has assembled the largest evolutionary tree of scorpions yet, showing seven independent instances in which the distinctive eight-legged creatures evolved venom compounds toxic to mammals.

“The last major changes to their body shape, their morphology, happened about 430 million years ago, when they left the water and moved onto land,” says Carlos Santibáñez-López, a former postdoctoral researcher at UW–Madison and lead author of the new study published today in the journal Systematic Biology. “But we know now that they have evolved in very important ways much more recently.”

With the help of collaborators around the world, Santibáñez-López collected specimens representing 100 scorpion species and extracted from their venom glands samples of RNA, a strip of instructions transcribed from DNA to tells cells which proteins (like venom) to make. By collecting the RNA shortly after the scorpions killed an insect meal, Santibáñez-López, was able to focus on the genes actively making toxins while the scorpion replenished its venom supply. 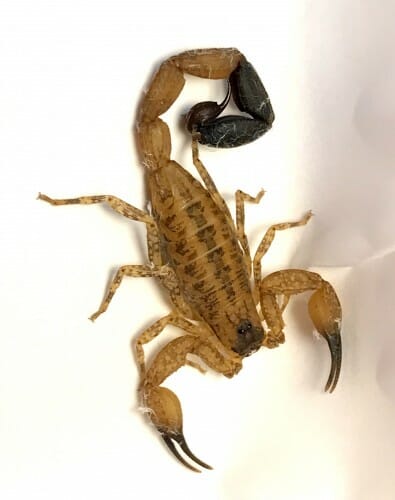 A female Tityus costatus scorpion from Brazil makes toxins that can kill humans, but components of deadly scorpion venom are also being studied for antimicrobial and anti-tumor properties. Photo by Carlos Santibáñez-López

Building a family tree based on the differences in venom, the researchers could see that while scorpions had split into two major families around 300 million years ago — Buthidae and Iuridae, which would give rise to the 22 families of modern scorpions —that division came long before any scorpion evolved venom toxins that target mammals. And for good reason. There weren’t any mammals to speak of.

Closer to 70 million years ago, during the dawn of the age of mammals, the Cenozoic era, new animals like shrews — and later bats, rodents, mongooses and badgers — would develop a taste for scorpions. But the scorpions had a few tricks up their curved tails.

It didn’t hurt that the venom the scorpions used to disable the insects they ate was not that far, chemically speaking, from toxins that would work on their rising predators.

“The toolkit was there,” says Prashant Sharma, study co-author and a UW–Madison professor of integrative biology. “They had an available pool of genes to draw from that were making toxins that could target insect nervous systems. It didn’t take much change to adapt those genes to make toxins that target specific functions in mammal nerve cells.” 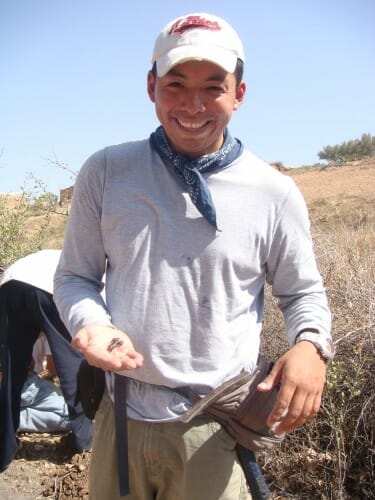 The breadth of the new genomic data is such that the researchers can follow the stages of development as scorpions grew more dangerous to mammals.

“We think we’ve caught, through this large data set, evidence for that stepwise acquisition of defenses,” says Sharma, whose work is supported by the National Science Foundation. “They go from scorpions that have an insect-specific toxin that’s used for prey capture, to something that at some point had aspects toxic to both insects and mammals, to finally mammal-specific toxins used as a deterrent, essentially, as a way to keep predators at bay.”

Even before that happened, scorpions had diverged into a wide range of species across much of the planet. But, according to the new genomic analysis, mammal-specific toxins evolved independently in five separate branches of the Buthidae family alone.

The distinctions are strong enough that they may help reorganize much of scorpion taxonomy. They may also help advance burgeoning research on the human medical applications of scorpion venom compounds.

Scientists have identified scorpion toxins with pharmaceutical potential, such as antimicrobial, anti-inflammatory and anti-tumor properties. Scorpion venom that is attracted to tumor cells can be saddled with a glowing protein and used as “tumor paint,” guiding surgeons as they remove cancerous masses from patients.

The catch is, most researchers are limited to studying just a few scorpion species that are handy to them. The new study, grounded in the differences in toxic compounds between scorpion species, could open a world of venom chemistry for clinical research.

“Now those labs will have this running library of all the genes that are being expressed in 100 different species, and they can study organisms based upon what they have available in their venom glands, rather than just because they happen to be outside at the moment,” Sharma says. “We hope that will accelerate this kind of translational biology and the search for biomedical applications.”