A new UW–Madison study documents active influenza infection in the lungs of living mice for the first time. The team found that immune cells called neutrophils show two kinds of motion: slow and rapid. In influenza-infected lungs, the neutrophils that remained after the peak day showed a decrease in rapid motion and spent more time moving slowly, as if scouting for infected cells.

In the 1966 novel, Fantastic Voyage, written by biochemist and author Isaac Asimov, a crew of people become miniaturized in order to travel through the body of a scientist and save him from a blood clot in his brain.

For University of Wisconsin–Madison virologist and flu expert Yoshihiro Kawaoka, recently seeing real, active influenza infection in the lungs of living mice for the first time was reminiscent of this 50-year-old piece of science fiction, which was also adapted into a film.

Publishing today (June 25, 2018) in the Proceedings of the National Academy of Sciences, Kawaoka and his team describe a new tool they call FluVision, which allows them to witness influenza infection in a living animal in action. Moreover, it provides a window into a world none have seen before, allowing scientists to observe and better understand what happens when a virus infects the lungs and the body responds. 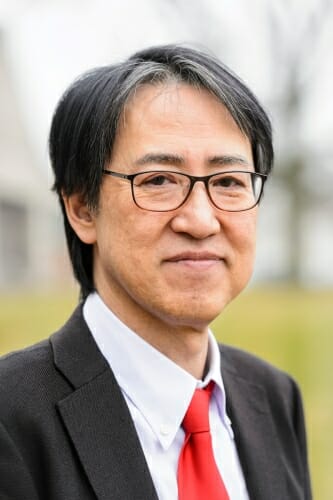 “Now we can see inside of the body in real time in virus-infected animals,” says the UW–Madison professor of pathobiological sciences at the UW–Madison School of Veterinary Medicine. “It’s like we can shrink and go inside the body.”

In so doing, the scientists have documented differences in the action of two different strains of flu, witnessed influenza viruses as they spread in the lungs, showed a reduction in blood flow speed in infected areas of the lungs, watched the activation and behavior of immune cells called neutrophils, and revealed some of the damage that can be caused by infection with a highly-pathogenic flu strain.

Notably, infection with a highly-pathogenic strain of influenza – the “bird flu,” H5N1 – proceeds more quickly and causes more damage than infection with a milder, mouse-adapted human strain – H1N1. Pathogenicity refers to the ability of a virus to cause disease.

To microscopically peer inside the lungs of living mice, Kawaoka’s team had to overcome several challenges. The first was to find technology that allowed them to see through the lungs. Another group had pioneered this with an approach called two-photon excitation microscopy, and Kawaoka’s team adapted it for its study.

The team had to build a system that allowed it to work with influenza viruses at a high level of biosafety — biosafety level three — while also allowing technicians access to the laser source required to see objects of interest in the lungs. Lead author Hiroshi Ueki helped design a system in which the laser is located outside of the high-containment lab space, aimed through a small glass window to a microscope inside the lab, all built on stabilized platforms that had to be physically separated but virtually connected.

Kawaoka’s team also had to create fluorescently-labeled viruses that could be used to infect the mice and viewed with the laser under the microscope, but which also functioned similarly to viruses found in nature. They call the technology Color-flu.

In addition, the researchers had to develop a method for keeping a portion of the lung still while the mouse breathed so they could get high-quality images and videos.  The team had a small, custom-crafted device made called a thoracic window, which Kawaoka says has been patented, that uses a vacuum to stabilize a small portion of surgically-exposed lung during imaging.

For the study, the researchers infected mice with either fluorescently-labeled H5N1 or H1N1. Two days after infection, they could see cells in the lung infected with virus particles. The numbers of these cells reached their peak three days after infection and were higher in H5N1-infected lungs.

Blood flow in the capillaries of influenza-infected lungs slowed down after infection with either virus, though to a lesser extent in H1N1-infected mice. This suggests the viruses affect the vascular system before causing lung damage.

The lungs of mice infected with H5N1 also became “leaky” two days after virus exposure, whereby the contents of the capillaries permeated into the tiny air sacs of the lungs, called alveoli. This was also associated with an increase in the number of dead cells in the lungs.

“Clearly, something is wrong with the pulmonary capillaries,” says Kawaoka, who is also a professor at the University of Tokyo, where the work was performed. “The reason why we see this leakage is that the junctions between endothelial cells (which make up the vessels in the lungs) loosen for some reason. We have documented this for the first time.”

Studying the mechanisms of infection can be something of a chicken-and-egg endeavor, because once infection starts, so does the body’s response, triggering a cascade of actions that can also cause some of the damage associated with the pathogen. Some of it, like the pulmonary leakiness Kawaoka’s team observed, may help the body respond, he says. This relationship between virus and host is what drives much of Kawaoka’s curiosity.

After the number of influenza-infected cells peaked on day three, neutrophil numbers dropped, but those that remained behaved differently than neutrophils in healthy mice.

The team found that neutrophils show two kinds of motion: slow and rapid. In influenza-infected lungs, the neutrophils that remained after the peak day showed a decrease in rapid motion and spent more time moving slowly, as if scouting for infected cells.

“We don’t yet know why and what they’re doing,” says Kawaoka, but, he notes, this is the first time this behavior has been documented. And for him, it is motivation to dig even deeper, and adapt the technology for other respiratory viruses.

“We are seeing the mechanisms of the immune system at work,” he says. “These are the things you discover and it’s exciting, but now we have to figure out what’s going on.”

The study was funded by numerous federal grants from the nation of Japan and by the Japan Society for the Promotion of Science.