High-resolution supercomputer simulations developed at the University of Wisconsin–Madison are giving scientists a closer look at an atmospheric phenomenon that may be associated with some of the planet’s most destructive tornadoes.

These naturally occurring phenomena, known as above anvil cirrus plumes, can indicate the imminent formation of large hail and damaging tornadoes in some observed supercell thunderstorms.

A new study about these plumes, which form as a ridge of cirrus clouds above the anvil-like top of severe thunderstorms, identifies how they are generated. Led by researchers at Stanford University and based on modeling work performed at UW–Madison, the study was published today in Science. It may help researchers and forecasters better understand when a thunderstorm could become especially damaging.

Above anvil cirrus plumes are observable by weather satellites, says Leigh Orf, study co-author and researcher with the UW–Madison Cooperative Institute for Meteorological Satellite Studies, and researchers have observed them to be a signal of the potential for imminent severe weather.

In their computer simulations, the researchers found that the plumes are driven by another phenomenon known as a hydraulic jump, usually associated with the flow of water or other fluids at Earth’s surface.

Under certain atmospheric conditions, air flows rapidly over a thunderstorm’s overshooting top, a dome-like protrusion above the storm’s anvil and its strong updraft. In simulations exhibiting above anvil cirrus plumes, a thin, horizontal jet with winds in excess of 200 miles per hour precedes the formation of the hydraulic jump. In the jump’s turbulent wake, ice and water vapor are injected into the stable middle layer of the atmosphere, known as the stratosphere, forming an above anvil cirrus plume. 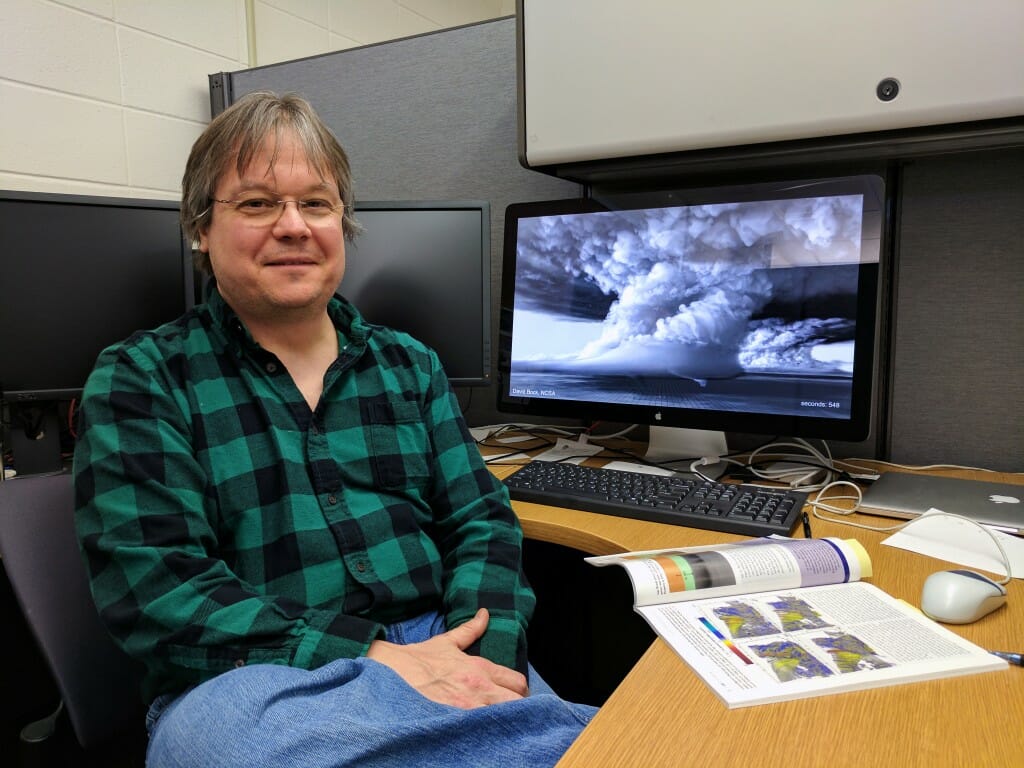 Researcher Leigh Orf is with the UW–Madison Cooperative Institute for Meteorological Satellite Studies. His expertise in modeling and simulating storms on supercomputers supported this study. UW–Madison

About 75 percent of thunderstorms with these plumes produce large hail or tornadoes, says Orf, whose expertise includes modeling and simulating storms on supercomputers. Their appearance on satellite imagery can help guide severe weather forecasts.

The new study may also help clarify how much moisture from a thunderstorm of a certain strength could be forced into the stratosphere and what that abundance of water may mean for climate change research, Orf adds. “The stratosphere is typically very dry, and thunderstorms are a known mechanism for moistening it.”

In the stratosphere, water from above anvil cirrus plumes is broken apart by solar energy, igniting a chemical reaction that can destroy the Earth’s protective ozone layer.

“In a warming climate that produces stronger and more intense convection, climate scientists are interested in how much water is injected into the stratosphere by thunderstorms because of the aggregate effect this has on stratospheric ozone,” explains Orf. “In our simulations that exhibit plumes, water reaches deep into the stratosphere where it possibly could have more of a long-term climate impact.”

Read more about the study and its findings from Stanford University.

The study was led by Morgan O’Neill at Stanford and includes co-authors Gerald Heymsfield at NASA and UW–Madison graduate student Kelton Halbert. It was supported by the National Science Foundation and the NASA Precipitation Measurement Mission and Ground Validation program. Supercomputing resources were provided by the Texas Advanced Computing Center at the University of Texas at Austin on its Frontera system.