Scientists discover cause of aging-related disease in mice, then reverse its symptoms

In a study published in Aging Cell, researchers at the University of Wisconsin–Madison show that mice making too much of a human protein called AT-1 show signs of early aging and premature death, which are also symptoms of the human disorder progeria.

Researchers were able to reverse the signs of accelerated aging and early death by restoring a key cellular function that seemed to be blocked in these mice.

Along with clues about the biological pathways causing progeria, the findings may shed light on other developmental and aging-related disorders. Variations in the AT-1 gene have been linked to several health conditions, including autism spectrum disorder, intellectual disabilities and increased risk of seizures, among others. 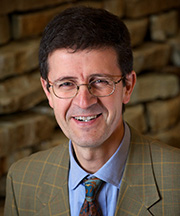 “The AT-1 protein is involved in a host of quality-control processes in our cells that affect both development and aging,” says Luigi Puglielli, senior author of the new study and a professor in UW–Madison School of Medicine and Public Health and the Waisman Center. “We have taken key steps toward uncovering the biology of this protein.”

Puglielli isn’t talking about reversing aging; rather, he is focused on finding ways to delay or minimize some of the health conditions often associated with growing older. “If we can push back by decades some of the diseases that accompany aging, such as Alzheimer’s disease or osteoporosis, we can greatly increase people’s quality of life.

Typically, the AT-1 protein acts as a gatekeeper for a molecule called acetyl-CoA, which is involved in biochemical pathways essential for life. AT-1 regulates how much acetyl-CoA enters the endoplasmic reticulum, or ER, a lacy network of interconnected tubes within our cells. The ER is the site where many proteins are processed.

In mice with high levels of AT-1 protein, excess acetyl-CoA gets transported into the ER, interfering with machinery in the ER that normally breaks down damaged proteins. This results in the formation of toxic protein aggregates.

“This is the first study to show that changes in acetyl-CoA transport dynamics within the cell cause the aging-related characteristics we see in our study,” says Puglielli.

When Puglielli and colleagues used a compound to restart the protein breakdown machinery, the mice no longer showed signs of accelerated aging and most of them did not die prematurely.

“This biochemical machinery – involved in protein breakdown – impacts many processes throughout the lifespan,” says Puglielli. “As we better understand how all the parts of this machine work together, we can get more efficient at developing therapies that ‘fix’ it when it breaks down.”

Children with extra copies or specific variations of the AT-1 gene can develop intellectual disability, autism-like symptoms and disorders that resemble progeria. Researchers were using a mouse model to study the effects of excess AT-1 when they made the aging-related find.

“By finding ways to modulate AT-1 activity, we can positively impact the life of these patients and their families” says Puglielli.

Researchers at UW–Madison are now testing other compounds for their effectiveness in treating the signs of advanced aging and early death in mice with high levels of human AT-1 protein. Knowing the molecular basis of how these compounds might work could be a big advantage, says Puglielli.

“The overwhelming majority of compounds that work in the lab will fail when testing with animal models,” he says. “A similar number that succeeded in animal trials will fail during human clinical trials. It’s critical that we start with multiple approaches and that when we select compounds to test, we understand how they work. Then we can be more confident of success.”

Study authors include several researchers at UW–Madison and the UW–Madison School of Medicine and Public Health. Puglielli and study co-author Rozalyn Anderson also has appointments with the William S. Middleton Memorial Veterans Hospital.

This work was funded by the National Institutes of Health grants AG041765, AG051974, AG053937, AG057408, CA152108, DK102948, DK108259, DK50107, HL113066, NS094154 and T32 AG000213; the Eunice Kennedy Shriver National Institute of Child Health and Development grant HD090256; the Glenn Foundation; the American Federation for Aging Research; and in part by the American Diabetes Association. This work was also supported using resources and facilities of the William S. Middleton Memorial Veterans Hospital, Madison, WI and at the Biochemistry Optical Core of the University of Wisconsin—Madison.